Wade Scores 50 As Heat Tune Out Jazz In Triple OT

Share All sharing options for: Wade Scores 50 As Heat Tune Out Jazz In Triple OT 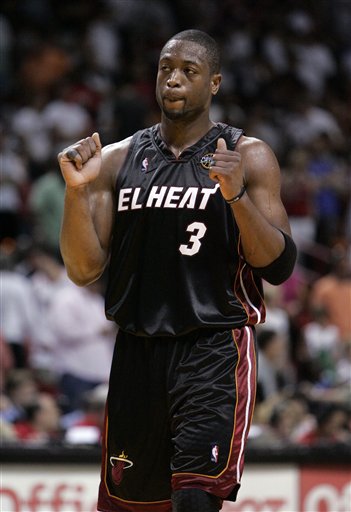 The Heat are playing like winners.  Over the past couple weeks, the Heat have been at their best when the game is on the line.  Today was no exception, with the Heat making two amazing comebacks at the end of regulation and the 1st overtime.  It may seem a little shocking to see Dwyane Wade miss 2 potential game winning shots, but keep this in mind.  Both times the Heat had limited time to work with; 5 seconds in the 1st OT and 3 seconds in the 2nd.  And both times Wade had to put up a three pointer.  He still scored 50 points on a NBA season high 39 attempts (19-for-39) and fell 1 assist shy of what would’ve been his 1st triple double of the year. He also hit 4-of-11 three pointers and went 8-for-9 from the charity stripe.

The Heat would go almost 3 minutes without scoring towards the end of the 4th quarter, turning a 1-point deficit into 8.  Two free throws by Deron Williams would put the Jazz up 7 with 2:23 left, but that’s when the Heat turned up the D.  Utah wouldn’t score for the rest of the 4th quarter, and the Heat would go on a 7-0 run over the last 0:55 seconds to force overtime.

One HUGE play during that final 0:55 seconds was a Jermaine O’Neal block on Paul Millsap’s dunk attempt.  It was a complete stuffing of what looked like a sure dunk.  What also has to be taken into consideration is the defense James Jones was playing on Kyle Korver, who torched us in the 4th quarter.  Jones shut down Korver, allowing the Heat to continue their run.

The 1st OT was almost identical to the final 5 minutes of regulation.  Utah started out by scoring the first 8 points, but then wouldn’t score over the last 2:45 allowing Miami to tie it up and force OT #2.

The momentum was shifting…Utah's run to open the 1st overtime was the last time they would put Miami on their heels.  From that point on, it was the Jazz trying to keep pace with the Heat, and for one overtime period, they did.

Jermaine O’Neal was on a mission at the beginning of the 3rd OT, scoring 4 points with a rebound and a block in the first 2:13.  From there his teammates took over, outscoring Utah 11-2 en route to their 3rd straight victory.  O’Neal did put a final stamp on the game, slamming the door on Deron Williams’ layup attempt for his 5th, ending Utah’s ‘last gasp’ comeback shot.  O’Neal is ranked 5th in the NBA with 2.0 blocks/game.

The Heat are starting to look damn good.  The extra room Dwyane Wade has to work with since the acquisition of Jermaine O’Neal is worth its weight in gold, and the whole team is benefiting from the increased offensive production.  The Heat are in the midst of a huge slump by Daequan Cook, and yet we’re still winning.  Production is coming from all over the lineup, with someone different stepping up when the situation calls for it.

Maybe this ‘pick-n-choose’ rotation is really starting to work.  Guys are hungry for playing time, and with most of the dressed players knowing that at any time their number could be called and they could be in the game, every body want to produce.  And everybody is producing.

When Jamario Moon, James Jones and Luther Head go a combined 5-for-9 from beyond the arc, you know everybody on the roster is primed to produce.

Dwyane Wade became the Miami Heat’s all-time leading scorer during the 3rd quarter with his 9,460th point.  He passed Alonzo Mourning, and achieved the feat in 213 less games then the Great Alonzo.

"If anybody had to break the all-time scoring record, I wanted it to be D. Wade," said Mourning, who sat along the baseline by the Heat bench. "I'm proud of him and I think the best is yet to come. And, by the way, there is no doubt in my mind that he is the MVP of the league this year."

Luther Head made his Heat debut, and the combo guard (he’ll play both the 1 and 2) looked good, hitting his first and only three-point attempt and provided solid D.  Head will likely play a large role in resting D-Wade during future games.

More love for Jermaine O’Neal?  You got it…in his 13 games with the Heat he is already 2nd on the team in drawn charges with 10.

I am officially taking PIM off of Udonis Haslem’s back.  I fully realize that he doesn’t hit his jumpers anywhere near as often as he used to, but his non-stop hustle, his shut down defense and relentless effort on the glass is invaluable to this team.  I feel ashamed for looking past this…and Udonis, I apologize. 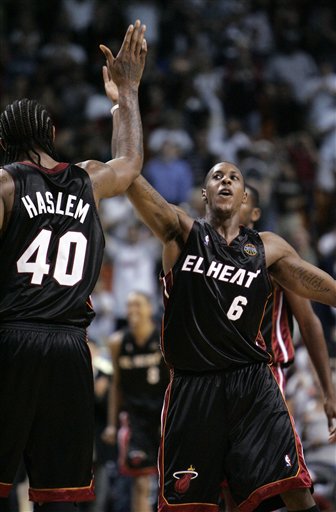 Mario Chalmers had another great game, and it looks like he is pushing past rookie slump #2.  He had two HUGE back-to-back steals in the 3rd OT, which led to the Heat pushing their lead from 2 to 6.  Super Mario finished with 23 points on 7-for-14 shooting, with 4 assists and 5 steals.  He was also a perfect 8-for-8 from the foul line.

This was the second time this week the Heat wore their "El Heat" jerseys; the other game was the double-OT Bulls game.  Trend?

Daequan Cook was inactive, recovering from dental surgery.  Blount and Quinn were the other inactive players. 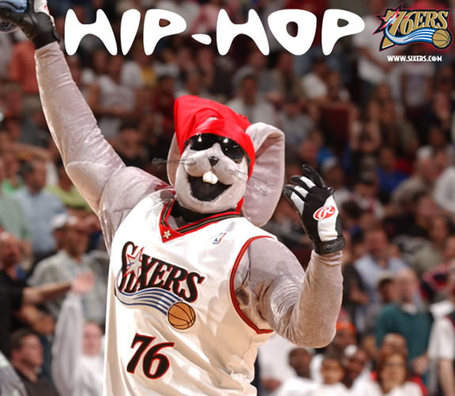 The Heat will fly above I-95 all the way to Philly for a 1pm matinee, a big game in the standings.  Hopefully Miami will have some gas left in the tank after today’s marathon.    GAMEDAY preview coming sometime in the early AM hours.