Share All sharing options for: Supreme Effort Falls Short Against Boston In OT 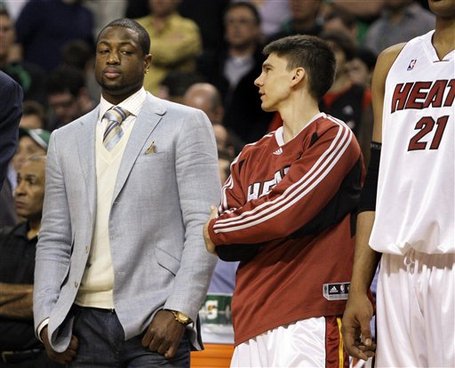 2 losses in a row hurts, but considering the circumstances it’s pretty understandable.  Miami overcame a rough start and played an amazingly competitive game against Boston without their best player.  Decision making on offense was questionable at times, but overall you can’t really complain when you get that kind of performance from a team full of role players.

A couple defensive decisions that I didn’t understand…When Eddie House and Paul Pierce were drilling everything, where was Jamario Moon and Yakhouba Diawara?  And what the hell was Daequan Cook doing guarding pierce…and ALONE?  They didn’t double Pierce until the last minute, and without the double they needed a long armed Moon guarding him instead of Daequan.

The biggest positive we can take from this was the play of Michael Beasley.  His ability to score at will on offense and his growing creativity using both hands shows how far he has come in his 6 short months playing in the NBA.  Equally important to me were his 21 points on 10-of-18 shooting and his 7 rebounds.  When he hustles on D and for boards he is the supreme player.  Nights like tonight where he goes all out are the ones he’ll need to duplicate if he wants to play 30+ minutes every game.

So why, with the Heat trying to sustain a slim lead in the 3rd quarter while Boston struggled from the field, did it take until 2:22 was left in the period for Beasley to enter the game?  He was the Heat’s leading scorer going into the 2nd half, and never showed any indications of being slowed down by whatever D the Celtics threw at him.  Glen Davis and Mikki Moore were both battling foul trouble throughout the game, and Beasley was playing solid D.

As well as his team played tonight…I’ve got to put this one on Spo.  A sudden loss of Wade causes many to scramble, and the Heat’s coach is no exception to the rule.

Udonis was limited to 22 minutes, but hit several (3 on my count) long jumpers, which was very nice to see.  Just imagine if he start hitting those with consistency again…

For the 2nd straight game a team shot over 60% in the 1st quarter against Miami.  Perhaps that can be attributed to the team not hitting ‘game speed’ on D right off the tip.  It’s something that should be paid attention to during the next film session.

James Jones is getting his stroke back.  He went 4-for-4 today with one 3-pointer, and was his usual self on D.  If/when everybody (Jones, Cook, Beasley) gets back to producing on a gamely basis, the Heat are suddenly going to be a very lethal and deep team.

How about Mario Chalmers last night?  He was running the point and leading the team like I had not seen since Jason Williams.  He constantly was creating off the drive, either taking to the rim himself or dishing it out for open looks.  He scored constantly off the dribble and drew a couple and ones.  Unfortunately his glaring highlight is missing a big free throw that would’ve put the Heat up one and in position to win the game.  But overall, a GREAT game for Super Mario.

Philly was outscored by Phoenix in the desert, and the Pistons lost in double OT at Houston. The main objective for the Heat is now holding on to the 5 seed.  Atlanta is a much better 1st round match up then any of the East’s top-3. 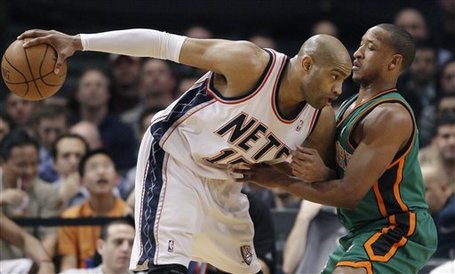 The Heat head south to Jersey to deal with the swampy Nets.  Miami will be going for the season sweep, up 3-0 thus far.