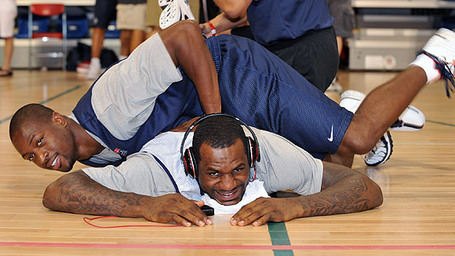 I hope that Knicks game got you all warmed up, because this week is going to be just as intense. The Heat’s new additions are beginning to look ‘not so new’ anymore, especially now that we have some production coming from our small forward position. Jamario Moon should be the starter tonight against Cleveland, hands down. He has proven to be our best option at the 3, and taken the pressure off of James Jones.

Now we can have Jones coming off the bench, still getting some important minutes, and slowly but surely getting back to form. As long as Moon can keep his level of play up through the remainder of the season (shouldn’t be a problem, he’s been playing well all year), Jones can work on getting his game back and hopefully get back to playing ‘his game’ in time for the playoffs.

Back to the Cleveland LeBron’s, who are coming off a very tough victory last night in Atlanta. The Hawks gave them about as much as they could handle, and had the ball in their hands with the game on the line. Joe Johnson would miss the potential game winner at the buzzer, giving the Cavs a 1-point victory. More importantly, Cleveland had to play a tough game in which their starters had to be in the game until the very end, and then immediately head down to Miami for the second game of their Southeast Division back-to-back.

WHO TO WATCH (other then LeBron)

It’s time for Mario Chalmers to step back up and play some of the solid D he’s shown throughout the season, and tonight he’ll have a chance to get it going against one of the more underrated point guards in the conference. Mo Williams has been one of the quiet leaders of the Cavs, putting up consistent numbers all year. Well…maybe he isn’t so quite anymore, telling ESPN’s Stephen A. Smith "I expect nothing less than to get to the Finals. That's what we're playing for, to win a championship". 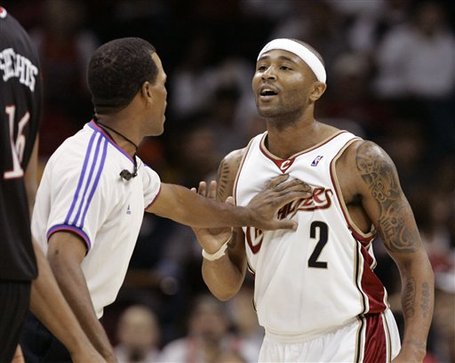 Hey Mo...you been working out?

Jermaine O’Neal should get a good workout tonight facing off against Zydrunas Ilgauskas. Z takes more shots from outside the paint then inside, and will draw O’Neal out to guard him. So be forewarned that Jermaine may not have his best rebounding game…but Ilgauskas will have his hands full dealing with O’Neal in the paint on D.

Will Chris Quinn or Yakhouba Diawara get any minutes? No…probably not.

I’m curious to see how D-Wade starts the game after the way he completely dismembered the Knicks on Saturday. Playing against LeBron usually pumps Dwyane up.

I don’t have any kind of educated guess as to why Daequan Cook has lost his shooting mojo. He’s getting open looks and creating opportunities, just not capitalizing. All we can do is hope the shots start falling for Dae-Dae again, and soon.

Cleveland beating the Hawks brought the Heat back to within 1.5 games of Atlanta. The Pistons may be righting the ship as they got a big road win in Boston, and the Nets fell to 1.5 games out of 8th place losing at home to New Orleans.