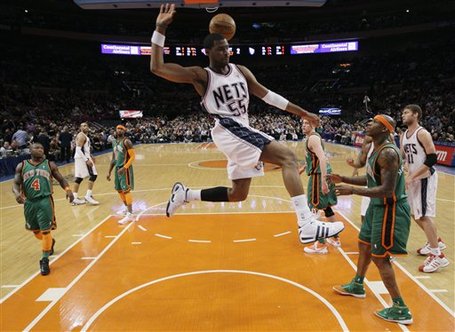 Enough is enough.  The Heat were playing their best ball of the season, but an unfortunate series of events led to a very rough schedule and two straight road losses.  Tonight in New Jersey the Heat have a great opportunity to get back on track against a good, but beatable Nets team.

Miami could be back at full strength tonight, but the Heat aren't sure if they should keep Dwyane on the shelf for another game.  Did you see Wade on the sidelines in the final minutes in Boston?  He was closer to the action then the players in uniform, and you know that he was thinking the exact same thing as the rest of us.  But if keeping Wade out a couple games right now will help ensure his health down the stretch...so be it.

The Nets are going to be without star point guard Devin Harris, who suffered a sprained left shoulder and strained deltoid muscle last week in L.A. when he hit the floor after a hard foul from the Clippers Marcus Camby.  Combine that with the explosion we saw out of Mario Chalmers in Boston and the rookie could be due for another big game.

Starting in his place is Keyon Dooling, someone Heat fans are very familiar with.  He had a solid game in his first game starting for Harris, but the Heat also need to watch out for rookie PG Chris Douglas-Roberts, who also played well in Harris’ absence.

After severely mis-handling the rotation in Boston, it will be interesting to see how Coach Spo deals with getting guys like Beasley, Cook and James Jones a decent amount of minutes.

One thing facing these injury-riddled teams should show the Heat is that they are very fortunate to have such a healthy squad this late in the season.  That being the case, we should be riding our best players to the finish line.  That’s unfortunate for guys like Chris Quinn, Mark Blount, and the back-up centers, but it’s imperative that the Heat lock up at least the 5 seed.  We do not want a piece of any of the 1-3 seeds in the 1st around.

The Heat should be looking to play shutdown D to open the game after having teams shooting the lights out in recent 1st quarters.  It’s going to need to start from the inside against New Jersey.

I really hope that Mario Chalmers is up to the task of guarding Keyon Dooling.  I can’t take a 2nd straight game getting torched by an ex-Heat.

Why didn’t we want to pay Eddie House again?

The Hawks won last night against Dallas, their 7th in a row at home.  Tonight we’ve got Philly @ Golden State and the Clippers are in Detroit.