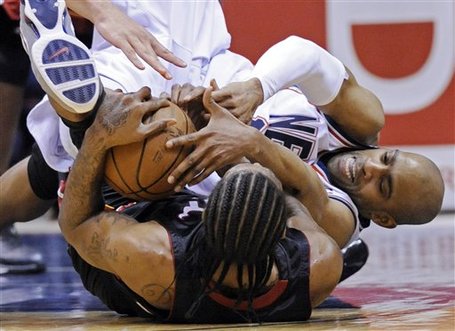 This game was basically the Heat shooting very poor for 2 ½ quarters then trying to claw their way back.  Unfortunately for them, the cold shooting returned and Jarvis Hayes couldn’t miss down the stretch.

D-Wade had some rust to shake off, and we’re still waiting for him to kick it back into whichever gear he was in until the triple OT game against Utah.  He always goes through his spurts of scoring during a game, which is why it’s a shock if he doesn’t score at least 20 points.  But he is our ‘down the stretch’ guy, and if he isn’t on his game in the 4th quarter, the Heat have BIG problems.

Despite getting into foul trouble (again), Mario Chalmers showed that he is still progressing on offense.  He was driving and creating, which means he may be making it a consistent thing.  If that’s the case, watch out.

The Heat started the game ice cold, shooting a meager 33% from the field in the 1st quarter.

Both teams were terrible out of halftime, each starting the 3rd quarter 1-for-9.

James Jones took a step back in his progress tonight.  Slow off the ball, not very accurate with his shot…lets hope its just one poor game, and he’ll get back on track Sunday.

Jermaine O’Neal was again solid.  15 points on 6-of-12 shooting, another drawn charge and 4 blocks.  He has been a defensive force, and extremely active on both ends, so his low rebounding numbers are baffling.  He had only 2 last night.

Interesting that the first guard off the bench was Luther Head, a spot that has been Daequan Cook's for the longest time.  Coach sending a message to the cold shooting Daequan?  It’s not like Head shoots much better, but something needs to jolt Dae Dae.

Again, Michael Beasley was an offensive force, scoring at will.  He had 13 points in the 1st half.  He then sat on the bench the entire 3rd quarter.  I know the Heat cut their lead, but how can we not get him in the game.

Dwyane Wade still managed to steal the show, and he did it on something you won’t find on any score sheet.  With 1:57 left in the 3rd, Jermaine O’Neal committed a foul as Wade went for the ball.  Wade then chucked the ball 75-feet down the court right into the bucket.  He received a standing ovation from the crowd, and was cracking a smile on the court.

4th place continues to fade away, but at least the Heat held their 1.5 game lead over Philly for 5th place.  The Sixers lost in Golden State, but the Pistons beat the Clippers at home, closing to within a half game of Philly. 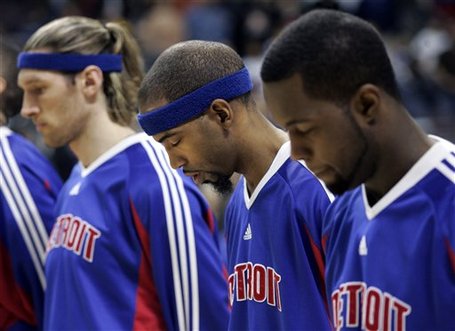 Sunday at Detroit followed by Monday night at home against Memphis.  Then day off…then another back to back.   It’s gonna be a long week…

I apologize for the missing Game Thread and tardy post game...i spend the day at the AAA for the NCAA tourny.  4 games, 12 hours...one long day.  Would've been nice to see the Heat pull out the win, but alas...

I'll have a Game Thread going for the Pistons game, but I'll be back at the arena for the 2nd round games.

I ran into a couple former Heat players...pretty cool turnout. 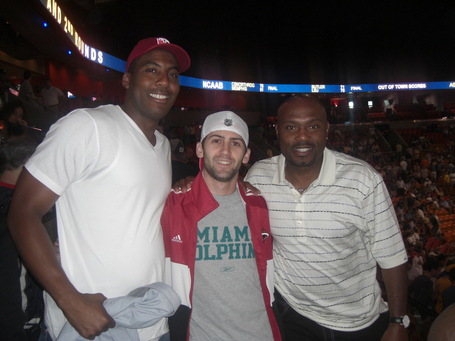 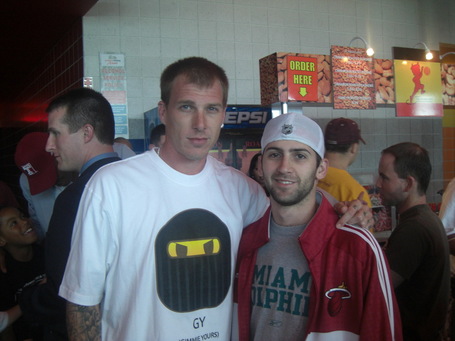