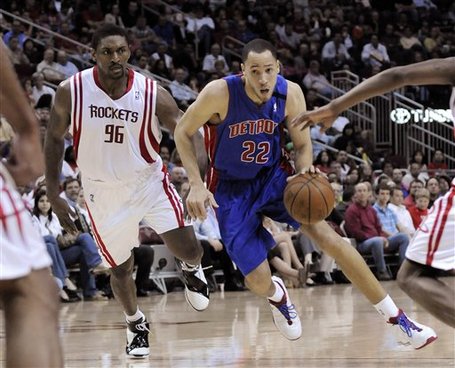 If ever there was a time for a big win, this is it.  The Heat will take their 3-game losing streak into Detroit, and will one again face a team dealing with major injury problems.  The Pistons have been without Allen Iverson for a few weeks, but will also be missing Rasheed Wallace who is suffering from a calf injury and probably Rip Hamilton who is nursing a sore groin.  Rodney Stuckey, who missed the Pistons last game suffering from a bad cold, but will likely be back in the lineup today against Miami.

The Pistons haven’t been playing to well lately, having lost 5 of 7 before winning their last game against the Clippers.  Injuries haven’t helped…but it’s given the opportunity for guys like Antonio McDyess to lead the scoring parade and Walter Hermann to drill the clutch 3’s he’s always said he could hit.

Meanwhile, the Heat have lost 3 straight, all on the road.  In fact, they have been downright disturbing on the road of late, dropping 9 of their last 11 away from the AAA.  It doesn’t get any easier, with today being the first game in a 4 game in 5-night stretch, 3 of which are on the road.

Kwame Brown filled in very well for Rasheed Wallace against the Clips, dropping in 14 points and grabbing 4 boards in 27 minutes.  He’ll provide a worthy adversary for Jermaine O’Neal; both will be looking to establish a low post presence and dominate the other.  Should be fun.

Daequan Cook is dying to break out of his slump, and one positive thing he can think about is his performance the last time these teams met.  Cook shot 6-for-11 for 16 points, including 4-of-8 from beyond.

Maybe it’ll take a ‘big game’ (typically Heat-Pistons game on National T.V. are big) to get D-Wade back to his 40ppg status.

If you are thinking that Michael Beasley will get more minutes since he’s been playing so well lately, prepare for disappointment.  Coach Spo has been clear in saying that offense is not the problem with this team.  So expect the defensive minded coach to keep Udonis Haslem above the depth chart over Beasley.

The Hawks lost in Cleveland, so everyone picked up a half game.  Tomorrow the Sixers are in Sacramento, who have lost 3 of 4 at home and 5 of 6 overall.