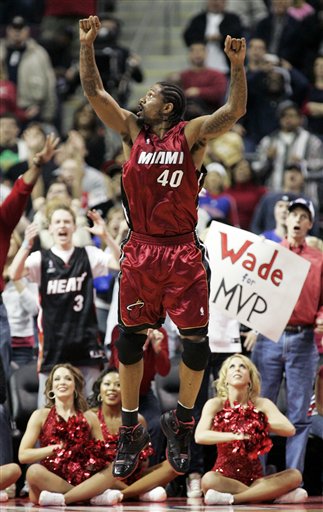 D-Wade is back.  He wasn’t gone very long, but it took a Nationally Televised showdown with Detroit to get Wade back in gear.  Miami was able to ride Dwyane through their comeback, allowing the Heat to snap their 3-game road skid and finally take advantage of an injured foe.

Despite being the ‘hero’ it was a rough night for Jermaine O’Neal, who had only 2 rebounds through 3 quarters, and wouldn’t get his third until his final minute tip-in (that looked very much like offensive goaltending, but its nice to get a call our way).

I don’t know if you saw the D-Wade special at halftime.  It was a story about Dwyane visiting a young guy from Weston who had recently had his hands and feet amputated.  I was just thinking about how you don’t see a lot of videos featuring the superstars in the NBA doing things like that very often.

Wade was just chilling with this little man, walking around his neighborhood with him, giving him advice and well wishes...It was another reason for me to think about how we are so lucky to have a guy like Dwyane Wade as our franchise player, knowing what a great person he is off the court and that he is the best player on it.

Either Mario Chalmers was recently given the green light to drive at will, or he suddenly realized that he was faster then 95% of the players in the NBA and can beat them to the rim.  Only problem is Mario's foul trouble.  It's starting to become way too constant.

How about the game of Udonis Haslem?  He shot 6-of-10 including 4 outside jumpers, for 16 points.  He also had 6 boards and was 4-for-4 from the foul line, all while going through a very quiet but tough game-long battle with Antonio McDyess.

Nice sequence in the 3rd quarter when Jermaine O’Neal blocked a Rodney Stuckey layup which led to a fast break and a Jamario Moon backwards reverse layup (and 1) off of a Tayshaun Prince foul.

Jamario Moon had a rough night trying to defend Tayshaun Prince, who continuously backed Moon down for easy looks at the rim.  It’s the play the Pistons called when trailing in the final minute, on 2 separate possessions.

It was a little concerning when D-Wade missed back to back free throws with under a minute left in the 3rd quarter, both hitting the front iron.  Short free throws usually means no lift…tired legs.  He was probably just in need of a breather after scoring 14 points in the quarter.

How about Jamario Moon and his 3 HUGE 3-pointers?  He needed a game like this on offense, an area he has been struggling of late.

Jermaine O’Neal took over the final minute hitting 19 foot jumper with under a minute left as the shot clock expired to put the Heat up 2, then tipping in a Udonis Haslem miss to re-take the 2-point lead. 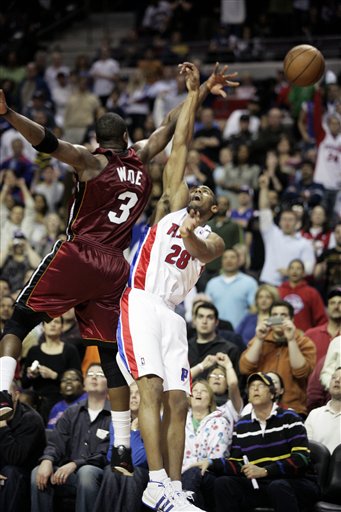 Dwyane had 4 blocks, but his last one was the biggest.  Blocking Rodney Stuckey’s layup with 2 seconds left, then maintaining possession in bounds and tossing it to Haslem as he fell out.

Also have to note the contributions from Luther Head, who has claimed all the extra minutes that went to guys like Diawara, Quinn and Jones.  His 3 steals will get him farther with this coach staff then his 5 points (due to 2 trips to the foul line where he went 3-of-4), 2 boards or 2 assists in 16 minutes.

ON TO THE GRIZZ

Memphis has lost 4 of their last 5 on the road and only 5 away from home all season.  The Heat have been red-hot at home, winning 4 in a row and 7 of 8 games since the All Star break.  The Grizzlies are in the midst of a very tough time on their schedule, and as if that wasn’t bad enough, their star rookie O.J. Mayo is in the midst of a huge shooting slump. 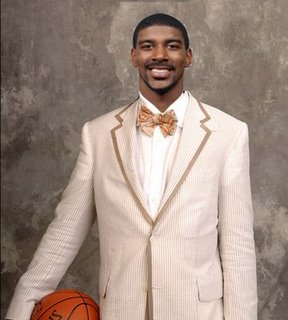 You know those ‘rookie walls’ we’ve discussed Mario Chalmers and Michael Beasley hitting, and breaking through?  Well Mayo hasn’t quite broken through his.  The leading rookie scorer has shot 41% or lower in 18 of his last 21 games.  He hasn’t shown the aggression and flashy play he was displaying early in the season, averaging only 14.3 points/game in March.

Rudy Gay, their best offensive option, has been inconsistent this season…shooting just 44% on the year and a career low 32% from beyond the arc.

The Heat and Sixers both won, so both picked up a half game on Atlanta and the Sixers extended their lead over Detroit for the 6 seed.  Tomorrow’s games (and who the Heat are rooting for):

Minnesota @ Atlanta- Obviously we’re rooting for an upset, but the Hawks are sick at home and Minnesota…not so much.
Philadelphia @ Portland- Great match up for the Heat; Portland is 28-6 at home and fighting for position in the Western Conference playoff race.


Unfortunately I’ll have to miss another Game Thread, as I’ll be covering the Panthers game for work.  DVR once again will be utilized, and the late night/early morning post-game will follow.