Beas' and the boards

Share All sharing options for: Beas' and the boards 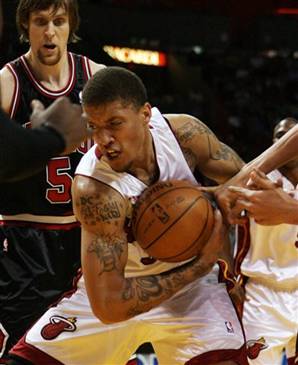 Some light has been shed as to the coaching decisions leading to the amount of playing time that Michael Beasley is given.  After last nights win over Memphis, Beasley told the media about a conversation he had with Coach Spoelstra.  That basically, the coach told Beasley that his rebounding efforts were not what the team expects from the rookie, and he would need to pick it up if he wants to see more playing time.  This answers the questions many have had about Beasley’s time on the floor; bust your butt and go after boards…you’ll play.  Take only outside shots and play passive on the glass…you’ll sit.

Beasley responded with one of the more active games we’ve seen from him in 2009.  He was just one rebound away from his first double digit total since January 31st against the Mavericks.  Hopefully it will be a constant thing.  Beasley had been rebounding very poorly of late, totaling 20 over his past six games (including a 7 rebound game, four 4 rebound games, and games of 1 and no boards)

Beasley acknowledged that he had gotten away from the glass, and Coach Spoelstra’s ‘one-way conversation’ might have been just what the rookie needed to jolt him back to form.