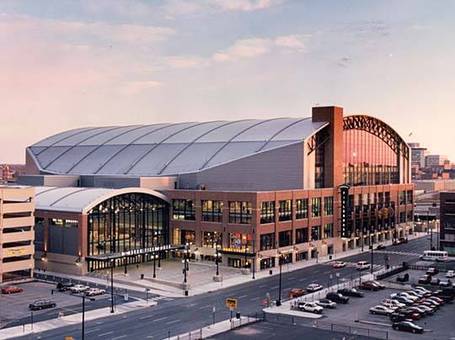 It's time to conquer this berg

The Heat are getting back to playing well, and the timing is perfect.  Their next 3 games are against teams below .500, and Miami could be entering another stretch of great games.  Despite all the inconsistency, they are still 6 games over .500 with 12 left to go.  And of their remaining games, only 5 are against teams with more wins then losses (Orlando, @ Dallas, New Orleans, @ Boston and @ Atlanta).

If the Heat can become a team that beats the teams they are supposed to, suddenly the schedule doesn’t look so bad.  Building momentum as they head towards the playoffs is a great thing…especially if they can lock up the 5 seed and NOT face Cleveland, Boston or Orlando in the 1st round.

The Pacers have been struggling, dropping 5 of their last 6, including 3 straight at home.  Meanwhile, the Heat haven’t won at Conseco Fieldhouse in 13 regular season games, and 16 if you include the playoffs of 2004.  One of the Pacers bright spots that the Heat will have to deal with is guard Jarret Jack.  He has been in and out of the starting lineup, but his recent re-entry was big.  He led the Pacers to their first win in 6 games on Saturday, leading the team with 31 points and 6 boards.

His scoring isn’t usually that high, but when he gets going it’s no secret in Indiana that the team does well when Jack plays well.  As long as the Heat can hold him down…which isn’t necessarily a difficult thing, they should be able to contain Danny Granger to minimal damage and outscore the supporting Pacers cast.

Marquis Daniels is listed as questionable for the game with a right wrist injury that has been noticeably been bothering him during games.  He has been wearing a brace on the wrist and has even avoided dribbling with that hand.  Some say he is on the verge of being shut down for the season, but that wont be until the Pacers accept their non-playoff bound fate.

Danny Granger is getting back to form and will be playing his 5th game back in the lineup (4th starting) since a foot injury kept him out for 11 games.

As much as I can’t wait for Daequan Cook to get back on track, his struggles against the Pacers this year have been rough.  In 2 games he’s shooting only 4-of-15 and 2-of-9 from 3 for only 13 points in 51 minutes.

Jermaine O’Neal should be in the lineup tonight, and we can expect one of two things from the big guy.  He’ll either be a force on both ends, maybe even grabbing a few rebounds, or he’ll continue getting the ball fed into him while clanking forced shot after forced shot.  Either way, you know the effort will be at full force with O’Neal playing at his old stomping ground.

The match up of Mario Chalmers vs. Jarret Jack will be key.  Rio has been picking up his offensive game but his D has been struggling, and considering Jack could be the spark that ignites the Pacers, Mario will need to come up with something.

With just 12 games left in the regular season, Dwayne Wade wont be doing much participating in the Heat's practices over the last 20 days of the season.  Only non-contact work will be in store for D-Wade as the Heat will make every attempt to keep him healthy heading into the playoffs.

The Bulls beat the Pistons last night, sending Detroit to their 2nd straight loss and dropping them 4 games behind the Heat.  11 games in the NBA tomorrow, and the Hawks and Sixers are both in action.
San Antonio @ Atlanta- Finally a chance for Atlanta to fall at home.
Minnesota @ Philadelphia- ...a chance for Philly to blow a big home game they should win?