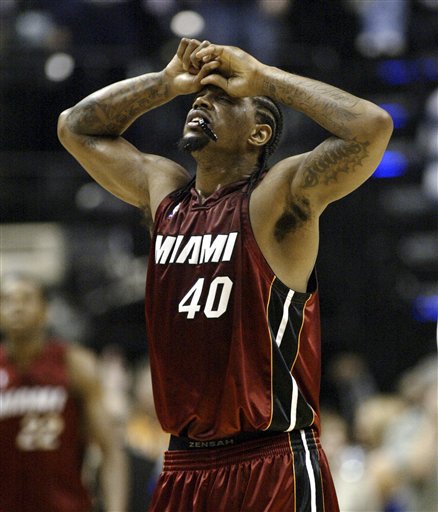 It seemed like this game was following the usual Heat win script.  Falling behind early, catching up and even taking a lead, then falling behind just in time to come back and win.  It’s happened more then a couple times, so why not tonight?  The obvious reason would be that Dwyane Wade had one of his worst shooting nights of the season, really unable to create anything other then foul shots on offense. He shot only 4-of-18 through 3 quarters but still had 16 points thanks to being 8-of-8 from the line.  Even on a terrible shooting night, his ability to get to the line and consistently hitting his free throws can sustain his scoring.

Wade finished by going 1-for-6 from the field in the 4th quarter and only 2-of-4 from the line.  Without Dwyane playing his ‘usual’ game, the Heat couldn’t muster up anything else on offense.  If not for a hot night by Udonis Haslem, this game would’ve been really ugly.

Very quietly Udonis Haslem is returning to his old form.  He went 4-for-4 from the field in the 1st half, then after missing his first shot of the 2nd half, made his next 5. Those long-range jumpers are falling much more consistently for Haslem, much to the delight of Heat fans near and far.  He finished with 18 points and 14 boards.

Overall, the Heat took a lead into the 4th quarter on the road against a sub-par team, and couldn’t get the win.  The Pacers even lost Troy Murphy who was injured during the morning shootaround, but couldn’t take advantage.  Jeff Foster filled in nicely, burning the Heat for 16 rebounds 4 blocks and 5 points.

The Heat would hold the Pacers scoreless for the final 3:44 of the game, but could only score 8 points on 2-of-6 from the field despite trailing by 10.

He finally did it!  Michael Beasley drew his first NBA charge with 5:50 left in the 2nd quarter when he got in front of a Danny Granger drive and ‘took the charge’.  He then got up off the floor and pumped his fist as he ran to the Heat bench, who were all as elated as Beasley.  It’s been well known how hard B-easy has been trying to draw a charge, and the celebration by him and his teammates is no surprise.

The 1st half brought more of the same out of Michael Beasley, who had 7 points, 4 boards and an assist in his first 8 minutes.  His second half minutes were cut up as he was not played until late in the 3rd quarter, as usual, and was pulled down the stretch for Jermaine O’Neal.

As expected, Jermaine O’Neal came out firing on offense, scoring 9 points on 4-of-8 shooting and 2 rebounds in his first 13 minutes.  That would quickly fizzle out however, and he finished with 13 points on 6-of-14 shooting and only 2 rebounds.

D-Wade shot only 4-of-18 through 3 quarters but still had 16 points thanks to being 8-of-8 from the line.  Even on a terrible shooting night, his ability to get to the line and consistently hitting his free throws can sustain his scoring.

It appears that Luther Head has now moved ahead of Daequan Cook as he gobbled up what are usually Daequan’s minutes.  Unfortunately Head didn’t provide the defense that was needed.  T.J. Ford constantly beat Luther in the 4th quarter, and when Mario Chalmers was put back in the game, he didn’t fare much better. 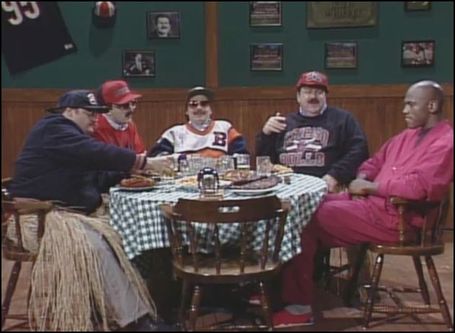 1-1 is still an obtainable and acceptable record for these back-to-back road games Miami is facing.  The Bulls will be no push over for the Heat, as they are fighting for the 8th and final playoff spot.  Despite being 4 games under .500, Chicago has won 2 straight and given themselves a nice 2.5 game cushion over 9th place Charlotte.

The Bulls star rookie Derrick Rose missed his first game on Tuesday when Chicago beat the Pistons.  He is questionable for tonight’s game against the Heat, but I’d bet he’ll be dressed for this one.  Something about this years rookie class…they have feistiness to them.

Coming off his terrible game in Indiana, Dwyane Wade will have to try extra hard tonight in Chicago.  He has struggled throughout his career in the United Center, but after the Heat’s display last night, there should be no shortage for inspiration in the Miami locker room.

The Spurs hooked us up by beating the Hawks in Atlanta; unfortunately the Heat couldn’t take advantage.  The Sixers won at home over the Timberwolves, and now sit only a half game behind Miami.  Tomorrow’s games:

L.A. Lakers @ Detroit- A very losable game for Detroit, as they slip further away from relevance.
Miami @ Chicago- I think we’ll go for the underdogs in this one…wait, which team is that again?