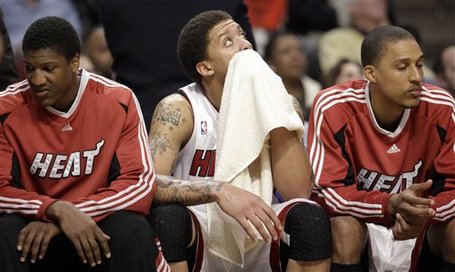 D-Wade was out on the United Center court earlier then usual last night, practicing his jumper over and over, trying to get all the kinks out after his poor shooting effort the night before in Indiana.  There was no way the leader of his team was going to have a repeat performance.  He came out looking to score, driving early and often en route to 11 1st quarter points.

He wouldn’t stop there…after taking his usual break, Wade came back into the game 3 min into the 2nd and picked up right where he left off.  He finished the half with 21 points on 8-for-13 shooting with 4 boards and 4 dimes.  But Wade couldn’t get it going in the 3rd quarter as the Bulls did a great job denying the ball to Dwyane.  He would only get off 5 shots (though he did go 3-of-5 including a missed 3 at the buzzer) in a quarter that saw the Heat go 5-of-17 from the field and get outscored 32-14.

Unlike last night, D-Wade was pretty much the only Heat player to get anything going against the Bulls.  Role players Jamario Moon, Luther Head, Michael Beasley, Daequan Cook, James Jones and Jamaal Magloire combined for 21 points on 8-of-27 shooting (1-for-9 from 3).

The poor shooting was contagious as the Heat shot only 45% from the field, but more importantly only 3-of-14 (21%) from beyond the arc.  I guess this kind of shooting can be ‘expected’ on the back end of a back-to-back, but c’mon.  After watching this team night in and night out, you know what they are capable of.  Regardless when their last game may have been, they are fully able of putting fourth a better effort then what we saw last night in Chicago.

I can only shake my head when I see the Heat, down by 15 just 90 seconds into the 4th, miss back to back wide open 3’s (James Jones and Michael Beasley).  This team needs some shooters…or simply for the ‘shooters’ already on the roster to start hitting their shots with the consistency that is expected of them.

Chicago did a good job of keeping Mario Chalmers contained on offense.  He scored 10 points on only 3-of-7 shooting, but did dish out 5 assists, grab 4 boards and 3 steals, block a shot and go a perfect 3-for-3 from the foul line.

Again Luther Head gobbled up Daequan Cook’s minutes.  It isn’t that Head is shooting much better, but can create off the dribble better then Daequan and play either guard position.

Jermaine O’Neal: 12 points, 5-of-10, 3 rebounds, 1 block, 1 steal, 23 minutes.  If he is going to continue to put these kind of numbers up, guys other then Dwyane Wade are going to have to benefit off of O’Neal’s presence.

When Wade blocked Ben Gordon’s shot in the 1st quarter he became the first player in the NBA 6 feet 4 or shorter to collect 100 blocks in a season.

He is also the only player in the NBA to have at least 100 blocks and 100 steals.

The Lakers won in Detroit, but the Heat’s loss dropped them percentage points behind Philly and into the 6 seed, the ‘1st round danger-zone’.  Also, the Pistons loss combined with the Bulls win put Detroit in 8th place.  Charlotte is in 9th place, 3 games back of Detroit.

The Heat are off tomorrow, but here are the relevants:
Charlotte @ Philadelphia- Bobcats are fighting for the 8 seed, should put up a good fight in Philly.
Boston @ Atlanta- Another lose-able home game for the Hawks, but with the Heat not winning, it doesn’t seem likely we’re primed to make a last minute run at home court.  At this point, we need to focus on locking up the 5 seed. 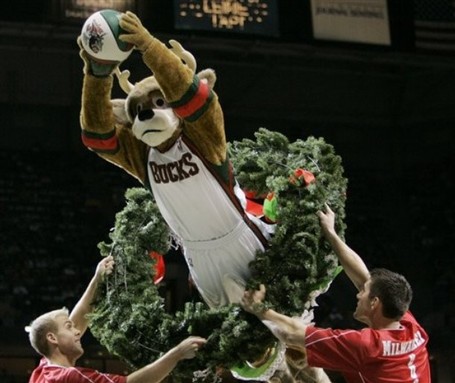