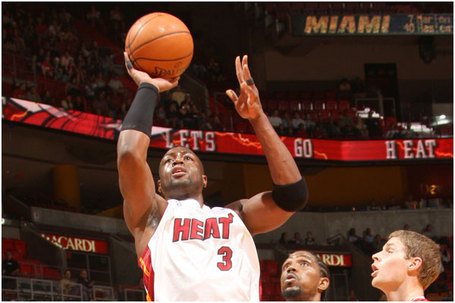 Milwaukee is a team in a freefall.  They were 27-29 on February 17th, but since then have gone 4-13 to fall almost completely out of the playoff race.  They are currently on a 4 game slide and are only 2-9 in March.  Last night in Orlando they had a great opportunity to take advantage of sloppy Dwight Howard fouls.  He went to the bench in the 3rd quarter with 4 fouls and the Magic only up 6.  Great place for a team to make a run, right?  Not quite…when Howard returned mid-way through the 4th, Orlando had pushed their lead to 16.

Remember the Heat’s last game against the Grizzlies?  The Heat should absolutely come away with a similar result tonight against the Bucks.  With the 2 games after this one being against Orlando and at Dallas, the Heat need a win in a BIG way.  There are only 10 games left in the season, and at this point it’s a countdown to the end.  Hopefully the Heat can muster up the gull to beat the 5 remaining teams they play that are under .500.  At least.

Michael Beasley and Daequan Cook have both played well against the Bucks this year.  Beasley has scored 34 points on 13-of-22 shooting and Cook has scored 37 on 11-of-18 shooting and 10-of-13 from beyond the arc.  What I wouldn’t give for some of that to come back…

The Heat and Sixers look to take the race for 5th place down to the wire.  With their season series tied at 2, Ira Winderman broke down the tiebreakers that Miami may have to deal with.

Just to refresh the tiebreaker system: The first tiebreaker is head-to-head, with the season series ending 2-2. The next tiebreaker is division record, which does not pertain since the Heat is in the Southeast and the 76ers in the Atlantic. Next is conference record, with the teams tied there entering Friday's play (which makes the Heat's remaining conference games against Milwaukee, Orlando, Charlotte, Washington, Boston, New York, Atlanta and Detroit a bit more significant than its non-conference games against Dallas and New Orleans).
That would take it to the fourth tiebreaker of best record against conference playoff teams. Against the projected East field of Cleveland, Orlando, Boston, Atlanta, Philadelphia, Miami, Chicago and Detroit, the Heat is 11-13 (with four games remaining). In that same pool, Philadelphia is 6-12 (with seven games remaining).
After that, it goes to record against West playoff teams and then point differential, where the 76ers have a positive differential and the Heat, despite standing four games above .500, a negative differential. (Actually it can't go beyond record against the East playoff pool, due to the different number of games played.)

Philly and Atlanta both lost at home!  The Bobcats got the win at the Wachovia Center, and Boston took care of business against the Hawks.   Tomorrow’s Games:
Detroit @ Washington- The way the Pistons have been playing…even the Wizards have a shot at beating them.
Indiana @ Chicago- Just to be sure the Bulls don’t sneak up on anyone, we’ll say Go Pacers on this one.