Share All sharing options for: Heat run home streak to 6 with 17-point victory over Bucks 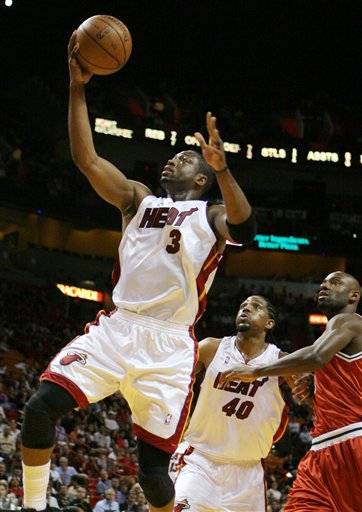 This was about as perfect of a game that we could have asked for from our Miami Heat.  They dominated the game, beating the Bucks by 17 in front of a crowd that looked a lot smaller then the announced 18,108.  I know it got a little scary in the 3rd and early 4th quarter when Milwaukee narrowed the lead to just 8, but if I have learned anything from watching the NBA it’s that every team is going to make a run.  If you remember, even the Heat made their runs during the 15-win season a year ago.

The Heat opened the game 8-of-9 from the field.  Then they opened the 2nd quarter on an 8-2 run (13-4 run if you tack on the final 1:04 of the 1st quarter), and finished the first half shooting 56%.  They had a 73-50 lead with just under 7 minutes left in the 3rd quarter, but would only score 4 points the rest of the way, shooting just 2-of-12, and the lead would shrink to just 9 early in the 4th.  Just as quickly as they cooled off, the Heat kicked it right back into gear, finishing the game shooting 8-of-13 en route to their 17-point victory.

Udonis Haslem looked great again, starting the game 3-for-3 including 2 long jumpers, and added 5 boards in the early minutes.  He did the same to open the 2nd half, scoring 4 points and grabbing three boards in the opening 4 minutes.  He’d finish with 16 points and 12 rebounds, his 100th career double double.  We are finally seeing the all-around game of Udonis Haslem that we’ve grown to love over the past 5+ seasons…I’m not going to say he is ‘getting hot’ anymore, because this is the U-D we should’ve been seeing all season.  Let’s just hope that it sticks, and he isn’t just experiencing a ‘flashback’.

Jermaine O’Neal once again was very active early.  He had 2 points and 2 assists in the first 2 minutes, factoring in on each of the Heat’s first three scores.  4 minutes later he’d have 6 points, 3 assists and a block.  But…once again, it was more of the same; O’Neal would finish 10 points on 4-of-11 shooting, and more assists (5) then rebounds (3).  He also had his usual 2 blocks.

None of his 3 rebounds came in the first half.  I tried to come up with a way for us to stop placing so much focus on O’Neal’s rebounding…but I cant.  It’s like having a point guard with no assists.

As expected, D-Wade was not going to take any crap tonight, just going out to score.  He was 6-of-7 for 16 1st half points, but his over anxiousness cost him 4 turnovers before halftime.  He’d finish with 27 points, the first time in 3 tries that he cracked the 20-point plateau against Milwaukee this season.

Welcome to Miami, James Jones.  His biggest game as a member of the Heat, going 3-of-5 from 3-land and shutting down Richard Jefferson in the 4th quarter.  Jones started the 4th for Miami and held Jefferson to just 5 points, allowing him to take only 1 shot in the final 8 minutes of the game.

Miami’s bench was awesome in the first half, outscoring the Bucks bench 26-0.  The Heat used 5 bench players in the half (Head, Cook, Jones, Beasley and Magloire) and each had at least 4 points at the break.

Both the Bulls and Pistons had exciting games on Saturday, and both teams narrowly escaped with a victory.  Every team around Miami is in action tomorrow…here’s how it looks:
L.A. Lakers @ Atlanta- The 3rd straight difficult home game for the Hawks after back-to-back loses to San Antonio and Boston.  It doesn’t get any easier for Atlanta…after today they hit the road for Philly and Boston, and then return home for a division showdown with the Magic.
Chicago @ Toronto- Somebody has to say ole’ to the Bulls…maybe our old friend Shawn Marion can help us out.
Philadelphia @ Detroit- This should be a great game, too bad its not nationally televised.  As much as it kills to say…we’re rooting for the Pistons in this one.  Philly is only a game behind, where as Detroit is 3.5 back. 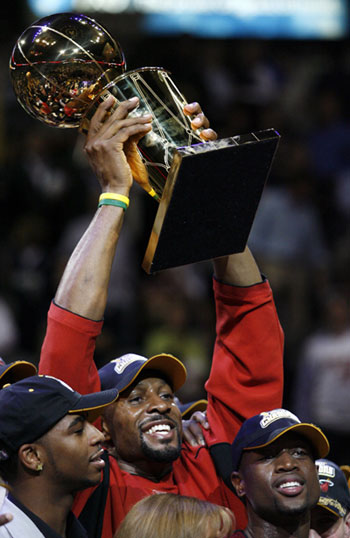 It’ll be a packed house on Monday (I've got my tickets), and the 20,000+ won’t be there to see Dwight Howard.  Sure, Orlando comes into Miami winning 5 in a row and 12 of 14, but the focus at the AAA will be on Alonzo Mourning.  After officially retiring earlier this year, his #33 Heat jersey will go up into the rafters along with our 2006 NBA Championship banner and 7 division championship banners.

Halftime for Monday's game against the visiting Magic has been extended from the normal 14 minutes to 24 minutes to accommodate the retiring of Alonzo Mourning's No. 33.

Among those scheduled to be in attendance for Mourning's ceremony are former Georgetown coach John Thompson, former Georgetown roommate Dikembe Mutombo, who the Heat is flying in on an off night for the Rockets, and cousin Jason Cooper, who donated the kidney that allowed Mourning to continue his career.