Wade vs. Lebron: Round 3 Goes To King James

Share All sharing options for: Wade vs. Lebron: Round 3 Goes To King James 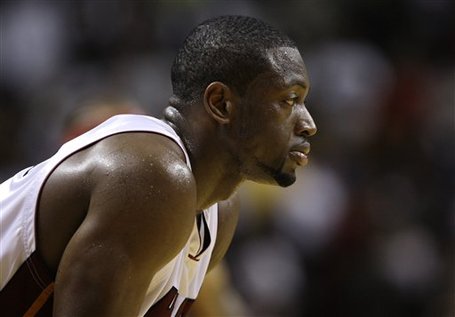 OK guys…lets not panic.  Cleveland is the best team in the Eastern Conference right now and we play them much better then Boston or Orlando.  It’s a better match up for us, and should make for an amazingly exciting 2nd round playoff series.   But now I’m getting ahead of myself.  Back to the last nights 4th quarter collapse, where the Heat led by 11 with under 8 minutes left before the LeBron James Show featuring Mo Williams kicked it into high gear.

The Cavs would outscore the Heat 27-9 from that point, turning a potentially huge Heat victory into another chapter in the ‘one that got away’ novel.  The turning point seemed to come when Mario Chalmers ran down the sideline and tried to call timeout.  He chucked the ball towards the bucket assuming the ref would grant his request, but instead led to a quick bucket for Cleveland.  A ‘rookie’ mistake?  I guarantee that it’s something Super Mario will never do again. 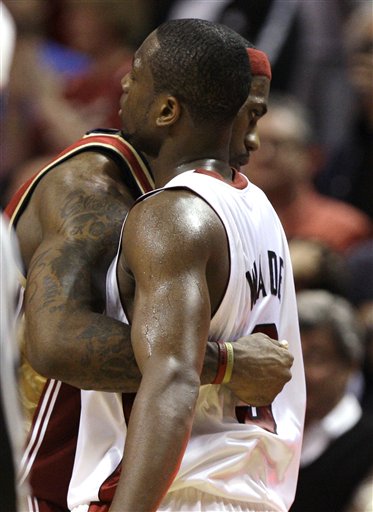 The Wade vs. LeBron showdown is looking like it could end up being like Magic-Bird or Jordan-Ewing.  The superstars bring out the best in one another, looking to one-up the other every time somebody does something significant.  Wade had a ridiculously sick stat line, other then one looming thing.  41 points, 7 boards, 9 assists, and 7 steals are some amazing numbers, but his 8 turnovers are something that cant be overlooked.  Part of it is because he has the ball in his hands so much more then any other player, but still…8 turnovers in one game is something that just cannot happen when playing an elite team.  LeBron did to us what Wade did to the Knicks, driving dagger after dagger into the heart of every Heat fan that packed the sold out AAA.  This sets up a major revenge game for Saturday when the Heat play in Cleveland, the final game between the two teams during the regular season.

Maybe its time we collect some money and hire a detective because somebody needs to find Daequan Cook’s game, and FAST.  In the last 2 games he’s played 31 minutes taken only 7 shots (all 3-pointers) and made 1.  Games like last night wouldn’t be as harsh if Cook were playing the way he was before the All-Star break.  A couple extra 3’s would’ve gone a long way.

Mario Chalmers established a new Heat rookie record for 3’s when he hit his 80th of the year a minute into the 2nd quarter.  Overall he had a solid game, but still needs to pick it back up on D.

I thought I was seeing the 2006 Miami Heat team in the early minutes, as they continued to get the ball into their big guy in the 1st quarter.  Jermaine O’Neal scored 8 of the Heat’s first 10 points.

Its official, Jamario Moon is our starting small forward.  He is turning out to be exactly what I had hoped when we acquired him.

Agent Mark Bartelstein confirmed that the Heat is one "of about a dozen" teams that has inquired about guard Luther Head, who received a buyout over the weekend from the Rockets and now is playoff-eligible for another team as a free agent. "We've talked to the Heat a little bit," said Bartelstein, whose client will clear waivers Wednesday. "There are about four or five teams that we feel might be a good fit."

Head has not played since January 10 when he suffered a right foot injury.  The Rockets had hoped to trade him before the deadline, but nobody would bite on an injured backup guard.  He has been cleared to play, so the injury is apparently no longer an issue.  The 2005 1st round pick has played his entire career in Houston and been a solid bench contributor who plays decent defense.

The Hawks got a semi-easy win in DC last night, but the Sixers lost at home to the Hornets.  We need to be paying attention to Detroit, who has suddenly figured out how to win again, and right around the time Allen Iverson gets hurt.  Go figure... 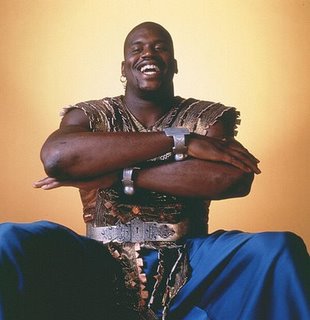 "I can make my talent disappear and re-appear"

Oh goody, here comes Shaq and the Suns.  I have been so sick of seeing how well Shaq is playing in Phoenix, considering he has fortified in my head that he was not trying AT ALL during his time in Miami last season.  He is a selfish immature man that only does things for his own well being.  He is only a good teammate when he thinks his team can win...

I’ll be back in the 305/954/561 (South Florida) tomorrow, but if you would like to see what I have been up to during my road trip, head over to THE LITTER BOX (SB Nation’s Florida Panthers page) to see my journal entries and pictures.  The best one is of me and Will Ferrell.  No joke.