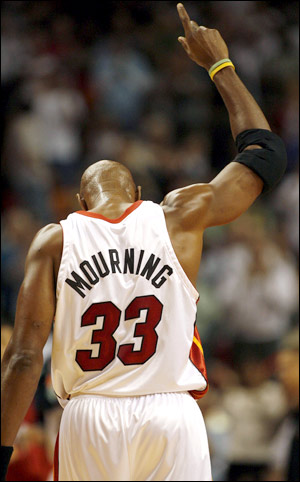 You have to forgive me if I seem to be more focused on Alonzo Mourning tonight then the Orlando Magic.  I expect the AAA to have an electric atmosphere, almost playoff-like, for the retiring of Zo’s #33 Heat jersey.  It will be the final chance to say goodbye to Zo the player, the face of the franchise for the better part of a decade.

From when he was first acquired by Pat Riley to be the centerpiece of his hard-nosed, defensive minded Heat teams of the late 90’s, Alonzo had a connection with the fans of Miami.  Zo led a championship caliber Heat team up until 2000, when he was first diagnosed with focal segmental glomerulosclerosis, a disease of the kidneys.  He would miss the first 5 months of that season, and despite trying to play through it, his condition worsened and he would miss the 2002-03 season.

After a brief stay in New Jersey, Alonzo would make a triumphant return to the Heat in March of 2005.  He wanted to finish his career in Miami, and more importantly help the one again championship caliber Heat win their first NBA title.  As we all know, the following season the Heat would do just that, and Zo was as big a part of it as any player on that roster.  His epic performances in the NBA Finals came as no surprise to any long-time Heat fans, and despite his career ending on a sour note, he is still the King of the Miami Heat, and that is something that Prince Wade has no problem accepting.

Back to the Magic, who coming in have beaten Miami in 11 of 12 and are in the midst of winning 12 of 14 overall.  This is the 4th meeting between the teams this season, with each winning their home games.  Miami beat the Magic on Jan 24th 103-97, their lone win against Orlando in the past couple seasons.

The last time Miami and Orlando faced off Dwyane Wade scored 50 points on 17-of-30 shooting and making 14-of-15 free throws.  Michael Beasley (14 pts) was the only other Heat player in double digits for scoring.

It should be fun watching Jermaine O’Neal try to keep up with Dwight Howard.  Should Howard get off to a good start, hopefully Jermaine wont try to over compensate on offense, taking ill-advised shots when fed the ball.

After a solid outing against the Bucks, it will be huge if James Jones can come out with his 2nd good game in a row.  If he plays 20+ minutes and hits 3 or more three-pointers, that’s a major step in the right direction for last years 3rd best 3-point shooter in the NBA.

Udonis Haslem has been leading by example, pulling his game out of the muck and back into lethal power forward status.  Also, he always seems to play well against the Magic, but was very upset after a poor effort the last time these teams met, last month in O-Town.

Atlanta beat the Lakers, re-claiming their home court for at least this night.  Detroit got a big home win over the Sixers, and Toronto helped us out by beating the Bulls in OT.  None of the 4-8 teams are in action tomorrow, other then the Heat that is. 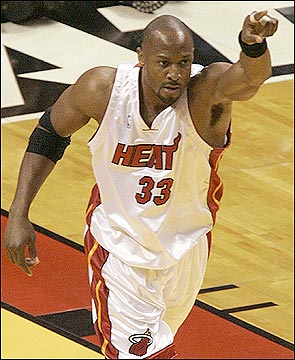 Just a taste of what he accomplished in the NBA.  Tonight is your night, Zo.