Share All sharing options for: Heat Score All Over Suns, Set For Big Weekend Road Trip 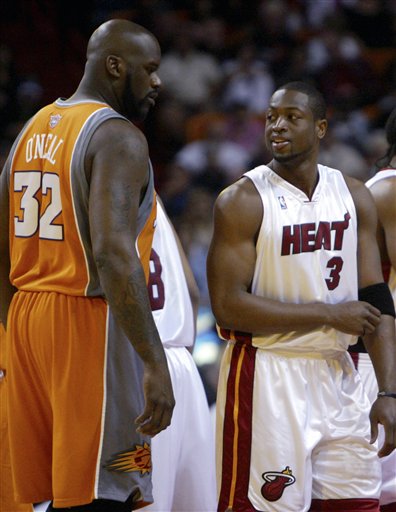 Tonight was one of those rare occasions where everyone came to play.  Everybody was clicking on offense, as it was a night of career high’s.  Daequan Cook (27 points) and Michael Beasley (28 points) both reached career high’s in scoring.  D-Wade tied a career high with 16 assists, a mark he set last week against the Pistons.   The 135 points was also the 2nd highest total in Heat franchise history.

The big story going into the game was Shaq.  He had 6 dunks and 22 points with 8 boards, but was limited to only 30 minutes and fouled out with 1:07 left and the heat up by 8.  He was cheered during the pre-game intros, and Mike B was nice enough to give him his deep voiced "Shaquuuuuuuuilleeeeeeee O’Neeeeeeeeeeealllll"

D-Wade had a great night, scoring 35 to go with his 16 dimes.  His stat line wasn’t as impressive, with only 1 steal and 1 block, but how sick was that 1 block?  Hustling back to swat a gimme Grant Hill layup from behind after a Heat turnover.  The lack of defensive stats is no knock on Wade...nobody was playing much D last night.

Miami’s backcourt was very active in the 1st quarter, with Wade, Chalmers and Cook scoring 23 of the Heat’s first 31 points.

Finally…pre-All-Star Daequan appeared.  He hit 6 three pointers and shot 9-for-14 overall.  He looked confidant from the very beginning, not hesitating to take his first 3 off a nice feed from D-Wade.

The Suns struggled on the boards in the first half, grabbing only 10 rebounds while committing 10 turnovers.

Jermaine O’Neal played a solid game on Shaq, but fouls would limit him to only 22 minutes.  He extended his shot-blocking streak to 13 straight games.

Michael Beasley looked great.  For the past week or so he has been working hard on the glass and it’s showing.  He grabbed 9 boards and shot 10-for-18, hitting his only 3 attempt.  He also went 7-for-7 from the line.

Miami as a team went 26-for-29 from the charity stripe, outscoring the Suns by 7.  They also out-rebounded Phoenix 40-30.

And how about Udonis hitting some open jumpers?!  He had 2 big ones in the final minutes of the game, and despite not scoring much early was a rebounding force in the 1st half.

The Heat moved to 22-6 following a loss.

The race for 8th place is really heating up.  The Bucks and Nets both lost tonight to Cleveland and Boston respectively, and combine that with Chicago’s win over Golden State, there is a logjam for the 8 seed.  There are now 6 teams going after one spot, all within 2 games of 8th place.  The Hawks lost in New York to the Knicks, moving the Heat a game closer to home court. 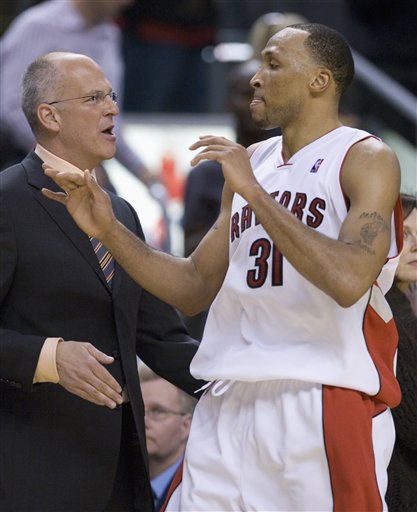 The Heat head north of the border to meet up with Shawn Marion and the Toronto Raptors.  Despite the dramatic overtones, this is a game Miami should absolutely win.  Especially considering that they play in Cleveland the next night.