Share All sharing options for: Revisiting The Marion/O'Neal Trade 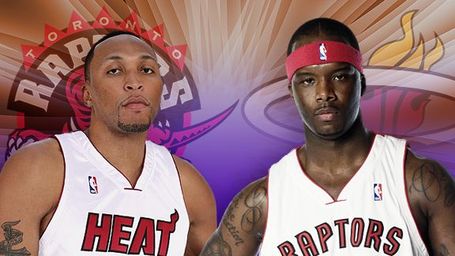 Friday night gave us the opportunity to re-visit the recent Heat-Raptors trade.  Miami appears to be the big winners no matter how you look at it, even coming away with the victory last night in Toronto. But with the win, Miami is still just 5-4 since making the trade despite being the obvious ‘on paper’ beneficiaries.

Jermaine O’Neal and Jamario Moon have been playing substantial minutes and been major contributors for the Heat.  It’s no secret how hard O’Neal has been working in order to better fit in with his new team and make a real push at the playoffs.  It’s been a bit of a struggle, but while Jermaine’s numbers haven’t been super-impressive, his teammates (especially D-Wade) have flourished since the big guy’s arrival.

As far as Jamario Moon is concerned, the Heat are 3-1 since inserting him into the starting lineup. He has helped fill the defensive void left by Shawn Marion and given Heat fans a new dunking thrill to watch out for.  He also has a MUCH better outside shot then Marion, and while Moon’s inside game cant compare to that of the Matrix, guys like Wade, Beasley and Mario Chalmers have been picking up the ‘slack’.

Overall, defense is still the main concern without Marion, who was the best defensive option the Heat had.  We don’t have the ‘shut-down’ outside presence, but Jermaine O’Neal is keeping us from getting owned by other big-guys while altering shots of the driving guards.  It going to be a progress…but we are on the right track.

Also…keep in mind that the Heat also got a future 1st round pick and a $4.2 million trade exception, and are also in the position they want to be heading into 2010.  So while we can knit-pick the positives and negatives, Miami is still the big winners in trade.  We just have to hope that the short-term productivity is enough to sustain us until we bring in the ‘big guns’ after next season.