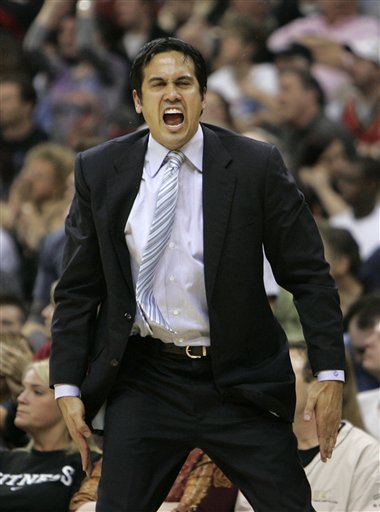 Last night was a prime example of why the Heat need ‘amazing’ Dwyane Wade to beat the elite teams of the league.  D-Wade was good by normal standards, but ‘great, ridiculous’ Wade was needed to win in Cleveland.  They made a great comeback effort, but without our best player drilling shot after shot down the stretch, Miami couldn’t get over the hump against the Cavs.

One thing that didn’t help was the countless ‘non-calls’ on Wade.  Usually don’t mention officials because as I was told at a young age by a hockey coach "stop bitching about the refs, you’re never gonna meet a good one".  However, last night D-Wade got so fed up that he was given his 2nd technical foul in the closing minutes and tossed from the game.  Erik Spoelstra was also given a T on the play, where wade drove for a layup and was bumped by Anderson Varejao, who had both arms straight up but leaned forward into Wade when jumping.

Miami dug themselves a hole early, going down 9-0 in the early minutes while starting 0-for-4 from the field and committing three early turnovers.  They finished the first quarter down by 14 while turning the ball over 8 times, with 10 of the Cavs first 16 points coming off of six Heat turnovers. 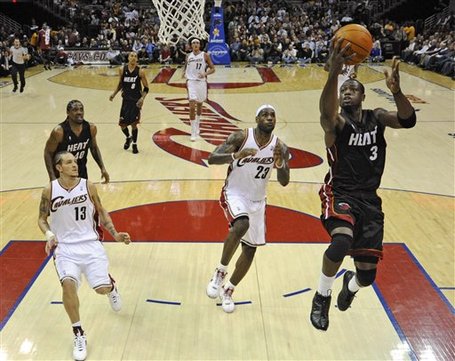 While neither Wade nor LeBron James had big scoring nights, James did get the best of D-Wade with his triple-double (14pts 10reb 12ast).

After falling behind by 14 after the 1st quarter, the Heat started the 2nd quarter with the lineup of Quinn, Cook, Beasley, Anthony and Dorrell Wright.

It’s becoming a regular thing for Michael Beasley to outplay Udonis Haslem at the 4.  It’s become a glaring problem now that Udonis is having so much trouble hitting his once automatic 16’-18’ jumpers.

Jermaine O’Neal looked good on offense and yes, I know he had a poor rebounding game, but so did his counterpart Zydrunas Ilgauskas.  Z is an ‘outside’ center, so his rebounding totals are generally low (He averages 7.5rpg and has only 13 over his past 3 games).  Both had 4 boards last night, but considering how much time they spent out of the paint, its no surprise.

I think overall there is no reason to be down on Miami.  They played a tough game in the hardest building to get a win in the NBA on the 2nd night of a back-to-back.  I read these comments getting on the cases of Jermaine O’Neal, Jamario Moon, Daequan Cook…relax everyone.  If they come back with a similar effort on Monday against the Bulls, then you can start complaining.

We can also look at the Bulls game as a 'swing' game for Daequan.  He had a great game in Toronto, and a pretty 'blah' game in Cleveland (10 points on 3-for-7 shooting, 1-for-3 from three).  A good game means he's back on track, but another poor game and we're right back in the midst of the post All-Star slump.

Atlanta broke out of their mini-slump by beating the red-hot Pistons.  The Sixers also got a win in Memphis, and Milwaukee got back within a half game of 8th place with a win over Golden State.  Also, watch out for the Bobcats, who won in New York and are only a game out of 8th. 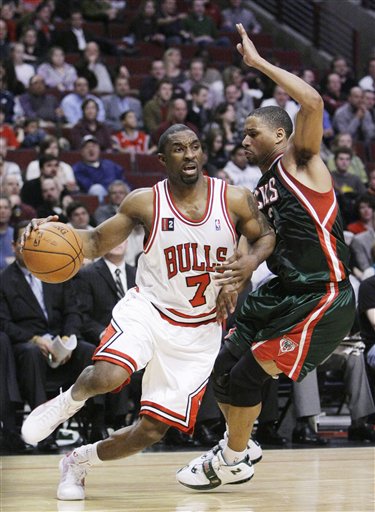 Ben Gordon had 34 points in the Bulls last game, a 15-point win over the Bucks

The last time the Heat went to Chicago, the Bulls were fighting to find an identity, on the outside of the playoff race looking in.  Now Chicago is in 8th place and playing some great ball since bringing in Brad Miller and shipping out Larry Hughes.  Joakim Noah has been doing a great job starting at center for the past month or so, and Tyrus Thomas has turned his season around in a big way.  This game should be a good one!