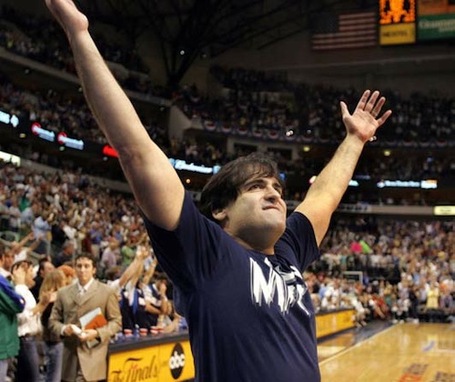 After almost a full week at home, the Heat leave the friendly confines of the AAA and embark on a 3-game road trip.  First stop is Dallas, where the Heat have traditionally struggled, but where the sweetest victory in franchise history took place.  It’s actually very funny that the first game after the emotional Zo jersey retiring ceremony is in a building that is as important to Zo as any other.

Unfortunately, none of that matters tonight.  Dallas is 14 games over .500 and have a 4 game lead over Phoenix for the 8th seed in the West; both teams have 8 games remaining to play.  The Mavs played only 6 games at the American Airlines Center in March.  Dallas is coming off an easy 20-point win last night in Minnesota, but hopefully the game, travel and incoming ‘Heat wave’ will prove to be too much for the Mavs.

Dirk Nowitzki is still the leader of the Mavericks, leading them in scoring, rebounding and minutes.  It’s been 17 games since he scored less then 20 points, and had 6 double doubles in March. He has been the model for consistency, carrying the load for Dallas throughout their struggles and injuries.

Josh Howard returned after missing 11 games with an ankle injury last night and was productive from the get-go.  He had 14 points and 6 boards in 22 minutes. I imagine he’ll get a similar workload, maybe even a little less, on the 2nd night of back-to-back.

The Heat have to watch out, as Dallas has the tendency to get out to good starts.  Last night for example they we’re up 34-18 late in the first quarter after running off 11 straight points.  Even against the Cavs on Sunday they got off to a 10-point lead after the 1st quarter, IN Cleveland.  But then they scored 25 points in the entire 2nd half.

With Luther Head out of the lineup just as quickly as he came in it, Daequan Cook should get a final chance to step up and re-claim his role as ‘bench option 1-B’ (Michael Beasley would be 1-A).  I was really disappointed to see him miss those open trays in the final minute against the Magic…the Heat need the guy taking those shots to hit them, whether it be Daequan, James Jones…whoever.  The players you have on the court in the final seconds with the game in the balance need to be able to hit open J’s, otherwise you’re not going anywhere in the post-season.

As expected, Cleveland took care of Detroit at the Q.  A bit of a surprise as Philly defended their homecourt beating Atlanta by 13, and the Pacers helped us out by beating Chicago.  Tomorrow’s game:
Detroit @ New Jersey- Back-to-back games could prove too much for reeling Detroit.  Go Nets.