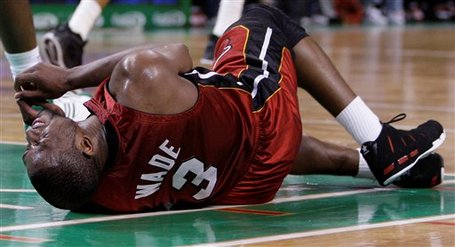 This pretty much sums it up...

Another game that the Heat had right in their grasp, but failed to execute down the stretch.  This game had the feel of a Heat road steal, but a few hundred missed free throws would prove too much to overcome.  The Heat went only 14-of-23 from the foul line, starting off just 5-of-12 in the 1st half, with D-Wade making just 4-of-9.  They were also pretty bad from 3-point-land; 6-of-19 (31%) is just gross, especially when your ‘three-point shooters’ (Chalmers, Cook, Jones) go 3-of-10.

When Yakhouba Diawara is in the game, there is a very good chance its for defensive reasons.  That’s why he was in there tonight chasing around Paul Pierce, and he did a decent job.  On offense however, his best attribute is shooting 3’s.  He isn’t a high % shooter by any stretch of the imagination, but when he tries to put the ball on the floor it gets ugly…fast.  I would prefer him to not touch the ball on offense…but that can’t happen.

The 3rd quarter was all Dwyane Wade and Michael Beasley.  They combined for 22 of the Heat’s 25 points in the quarter.  Beasley had exactly the kind of game we expected from him when put into the starting lineup.  He played great on both ends of the floor, earning his 6th double double of the year with 23 points and 13 boards to go along with his 2 steals and 2 dimes.  It was B-Easy’s first double double since the end of January, and there should be no question who the Heat’s starting power forward is until Udonis comes back.

The turning point came with just 1:55 left in the game.  With the game tied at 95, the Heat got the ball after Boston missed 2 ‘easy’ layups.  The shot clock was winding down and the ball went to Michael Beasley.  With under 5 seconds left, you would think Beasley was about to put up a jumper, but instead turned around and looked to make a pass outside.  For some reason, he tossed the ball 2/3 of the way down the court, blowing any chance for the Heat to take the late lead.  From that point, Boston would score 8 straight and the Heat’s next bucket was desperation 3 by James Jones with 10 seconds left.

Jermaine O’Neal had a solid first half, one of his most productive in a Heat uniform.  After collecting four 1st quarter rebounds, he finished the 1st half shooting 7-for-9, good for 14 points (highest scoring half as a member of the Heat) and 6 rebounds.  He also had 3 blocks before the half, including back-to-back blocks on Glen Davis.  It should have been back-to-back-to-back blocks when Jermaine blocked Davis’ 3rd putback attempt, but O’Neal was called for a phantom foul, and was T-ed up after for arguing.   He wouldn’t score again until 2:49 was left in the game, and had only 1 block and 3 boards in the 2nd half.

One criticism I have on Jermaine O’Neal something I’ve noticed he does when rebounding after a Heat missed free throw.  He does a good job of looking like he is boxing out, but really just kinda slides in-between the players, not jumping or making an effort unless the ball is coming right at him.

This was the first start for Michael Beasley since November 26th at Portland, but his start had more to do with Jamario Moon sitting out with a groin injury then it did Udonis Haslem being out of the lineup.

The Heat closed the 1st quarter with an interesting frontcourt.  After Michael Beasley went to the bench in the final minute, the Heat had Jamaal Magloire and Joel Anthony in the lineup together for the first time this season.  Then to open the 2nd quarter the Heat had Magloire and Jermaine O’Neal on the floor, another first.

The ‘big’ lineups were very productive against Boston’s freakishly large frontcourt, and could be very useful in the future should the Heat be faced with similar situations on defense.  It just gives Miami that many more options when Udonis is back.

Mario Chalmers set a mark for starts by a Heat rookie, going in his 79th game last night, breaking the mark of 78 games started by Caron Butler when he was a rookie in 2002-03.

A very scary moment in the final seconds of the 3rd quarter when D-Wade came down on the back of Kendrick Perkins left foot, appearing to twist his left ankle.  Luckily D-Wade came back into the game just 55 seconds into the 4th quarter.

Wade seemed to have no interest in being aggressive in the 1st half, taking only 5 shots and missing 5 of his 9 free throws.  He’d go 3-for-4 from the line in the 2nd half while making 8-of-15 from the field, but what stand out most are his back-to-back trays which tied the game at 88 with just over 5 minutes left.

Daequan Cook came back for the Heat and nailed his first 3-pointer.  He would then miss his next three shots in the first half, and didn’t come off the bench at all in the 2nd half.

Philly lost again, keeping the Heat a game ahead of Philly for the 5 seed.  Detroit won at home last night against New Jersey, and now the Pistons and Bulls are only a game back of the Sixers and 2 back of the Heat.  If Miami wants to play Atlanta in the first around (instead of Cleveland, Boston or Orlando), they’ll need to win a couple more games, but at least they control their own fate.  Atlanta sealed up home court with a win over Indiana.  Tomorrow’s Games:
Detroit @ Indiana- Both teams played last night, but the Pacers have been good at home while Detroit has been inconsistent.  Go Pacers…pretend you’re playing the Heat.
Charlotte @ Chicago- Not much left for the Bobcats to play for now that they’ve been officially eliminated from playoff contention, but hopefully they’ll embrace the ‘spoiler’ role. 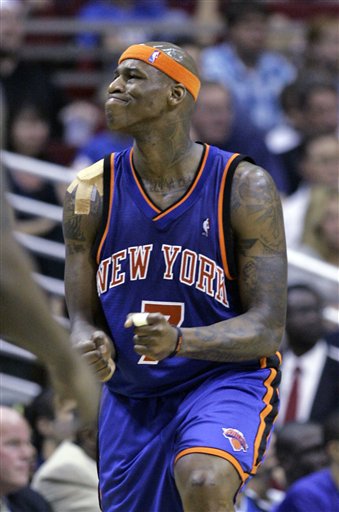 Fresh off a shocking win in Orlando, the Knicks head to Miami looking for the Florida sweep.  After what I saw from the Heat last night…I’d expect to see Miami come out looking for blood.