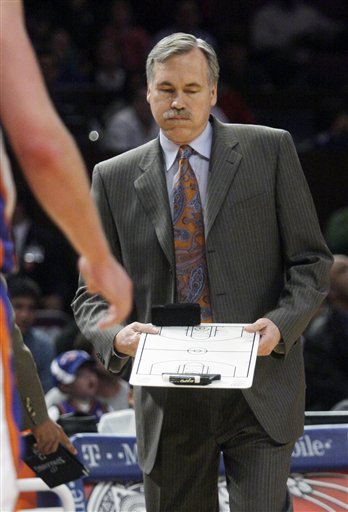 The Heat are looking to lock up the 5 seed, and their short journey begins tonight at the AAA when the Knicks come to South Beach.  Miami can clinch the 5 seed with a win over New York and a Philly loss in Toronto.  The Heat have had spurts of great basketball over the past few weeks, but injuries and cold streaks have kept the Heat just short of several wins.  Now they face New York in what looks to be the final ‘should win’ game on the Schedule.  Granted, Detroit has been playing like royal crapola, but they still have a solid roster and always play the Heat well.

For now we’ll focus on the Knickerbockers, who are fresh off a big road win over the Magic.  Al Harrington has been leading the way for the Knicks, and has been playing quite well of late.  In his last 10 games Harrington is scoring 23.6 ppg on 47% shooting while grabbing 6.4 boards, 1.8 assists, 1.8 steals and dropping in 2.8 three-pointers.  Not too shabby.

Also need to watch Wilson Chandler, who has picked up his game of late.  In his last 4 games, he’s shooting 53% from the field and 56% from 3 while adding 6 blocks and 5 steals in those games.  He’ll likely be chased around the court by Yakhouba Diawara, our new defensive ‘specialist’ (another loosely used term), but hopefully he’ll take less then the 4 trays he put up last game.  As far as I’m concerned, that’s three too many.  But like I said, while I’d prefer him to never touch the ball on offense, its better for him to chuck up three’s then to put the ball on the floor.

The Knicks haven’t been half bad on the road in April.  They got a win in Toronto, where wins for road teams have been very hard to come by lately, and lost a close one in Chicago before the shocking win in Orlando on Friday.

The there’s the Heat, who were hot as their name would indicate at home before dropping a couple tough ones to Orlando and New Orleans.

Did someone order another helping of Michael Beasley in the starting lineup?  Well..you may not be disappointed.  After his amazingly productive last couple games, B-Easy should be starting at least until Udonis Haslem comes back.  Perhaps the injury that kept Jamario Moon out of the starting lineup was just the catalyst needed for the move to be made.  Moon hadn’t been playing very well and his minutes were dropping.

I’d love to see D-Wade come out firing against Knicks, especially after his 5 shot 1st half in Boston.  Wade has had some big games against the Knicks (see below), so lets hope history repeats itself.

Depending on what kind of lineups the Knicks roll out, the Heat may use their ‘big guy’ lineups they used in Boston with Jermaine O’Neal and Jamaal Magloire out there at the same time.  It’s nice to know the Heat coaches aren’t afraid to utilize their lineup in whatever way necessary in order to compete with the players their opponents throw at them, avoiding those dreaded mis-matches.

The Pistons lost again…so I guess the Pacers too our advice and pretended they were playing the Heat.  Thanks Larry Bird!  The Bulls are hoping to move out of the 7 seed and got a big home win against the Bobcats to move them a half game behind the Sixers. Tomorrow’s Game:
Philadelphia @ Toronto- 4 straight losses for Toronto (3 at home) after they won 6 straight.  Still…the last second loss to Toronto may have upset them enough to come out and punch Philly in the jaw.

OK, so it's not 'my' video, but this is one of my favorite D-Wade moments.  The buzzer beater in New York in the 04-05 season...giggidy.  Enjoy!  (Keep an open ear for Eric Reid's call...I love how excited he gets for our Heat)