Wade and Beasley shine in snubbing of Knicks; Heat to face Atlanta in 1st round of playoffs

Share All sharing options for: Wade and Beasley shine in snubbing of Knicks; Heat to face Atlanta in 1st round of playoffs 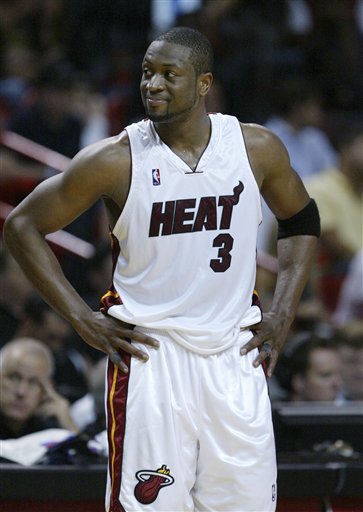 With two games left in the regular season, and a year removed from only 15 wins, the Heat got their 42nd win and locked up the 5th seed in the Eastern Conference.  We could be just scratching the surface on this amazing core the Heat have now, with Dwyane Wade and a couple rookies leading the way towards a very bright future in Miami.

The Heat came out and played amazing in the first quarter, going up at one point by 14 and finishing the period up 37-26. Dwyane Wade and Mario Chalmers led the charge offensively for the Heat, and Miami looked to be well on their way to win number 42. Both teams finished the 1st half shooting over 50%, but the second quarter was all New York as they quickly closed the gap and re-took the lead (they were up 7-5 early) with 3:31 left.  Most of their comeback was with D-Wade on the bench; Al Harrington scored 15 2nd quarter points and combined with a few three’s by Quentin Richardson the Knicks scored 39 points in the quarter en route to a 65-63 halftime lead.

The Heat started the 2nd quarter with Jamaal Magloire on the court instead of Jermaine O’Neal, who sprained his left calf.  The Heat wouldn’t miss a beat, as the buckets would continue to fall for Wade and Co.  Defense was obviously an afterthought last night, as both teams nailed shot after shot in the 3rd.  Look at the score after 3: 97-91 Miami.  That’s just a ridiculous amount of points.

Michael Beasley opened the 4th quarter with back-to-back jumpers, but then two straight Mario Chalmers turnovers led to a couple quick buckets by New York, who despite the Heat scoring (basically) at will, were staying within striking distance down only 4.  To their credit, the Heat never sat back, constantly attacking the basket and extending their lead to 11 half way through the 4th.  At this point Wade had 53 points and I was starting to hope the Knicks would keep pace so that Dwyane could possibly break Glen Rice’s Heat record of 56 points in a game.  Unfortunately, the Knicks started doubling Wade and he would finish with ‘only’ 55 points.  It was of no matter to the game, as the Heat ran away with it in the final quarter, winning by 17.

It was nice seeing D-Wade get off to a quick start, scoring 16 points in the opening quarter and showing leadership on the floor by taking charge of his team on offense. He’d finish the first half with 27 points on 10-of-14 shooting, and you could sense that he was poised for a big night.  He went right back to work in the 3rd quarter, scoring 5 quick points in the first 2 minutes.  He reached 40 points with just under 6 minutes left in the 3rd quarter, and had 50 before the quarter was over…just sick.  He reached a new career high in three-pointers when he hit his 6th of the game, still in the 3rd quarter.  He finished the game shooting 19-of-30, 6-of-12 from beyond and 11-for-13 from the charity stripe.  Think somebody is getting geared up for the playoffs?

Again, the Heat’s first shot was a Yakhouba Diawara three-pointer (a miss). Do they just assume nobody is going to cover him?  Then at the end of the 1st quarter I could only shake my head when Wade passed the ball to Kooba with less then 2 seconds left instead of putting up the ball himself.  I would prefer a double-covered Wade to throw up desperation three then for Diawara to chuck up a rushed air ball, which he did.

In recent games Mario Chalmers has struggled to get going on offense, usually taking until the 2nd half to get his scoring touch.  This wasn’t the case tonight, as he took 10 shots and had 13 points and 3 steals in the 1st half.  He’d finish with 15 points and 9 assists, adding 5 boards and 4 steals.  Solid all-around game by Super Mario.

The only unfortunate thing about Dwyane Wade’s ridiculous game is that it takes away from possibly the best game Michael Beasley has played in the NBA.  Beasley looked amazing in his second straight start, grabbing 7 first quarter rebounds and finishing the 1st half with 9 points, including a tray.  His great opening quarter was cut short with 2:26 left when he was whistled for his 2nd personal foul while going for a rebound.

Beasley was just as good in the 2nd half, hitting jumpers and driving with the ball effectively, but was also hustling on defense and going after rebounds like crazy.  He became the first Heat rookie since D-Wade to record 3-straight 20-point games, and after grabbing a career high 13 boards in the Heat’s last game in Boston, he’d set the bar a little higher, finishing with 16 last night to go with 28 points and a couple blocks.  He was also a perfect 3-for-3 from beyond the arc.  I dare anybody to tell me that Beasley wont be averaging 20 points and 10 boards when he is an everyday starter.

Other then Beasley, Wade and Chalmers, no Heat player had more then 8 points.  Daequan Cook played 25 minutes but was only 2-of-7 from the field (both buckets were three’s) and James Jones played 23 minutes and hit his only shot (also a three).

The Heat locked up the 5 seed with their win combined with the Sixers losing in Toronto.  That means Miami will travel up to Atlanta twice this week.  They finish their regular season road schedule in hot-lanta on Tuesday, then will head back up there this weekend for the 1st two games of the opening round of the playoffs.  We’ll look more into the Heat’s playoff matchup later this week.

The Heat are going to go ‘Back In Black’ for their playoff color this year.  If you remember, they were ‘White Hot’ in their championship year (and the following year) and in 04-05 it was the ‘Red Zone’.  The Heat haven't gone with black since D-Wade was a rookie.

Still some jockeying for position left for the 6-8 seeds in the East, but the Heat no longer have to watch scoreboards and standings. 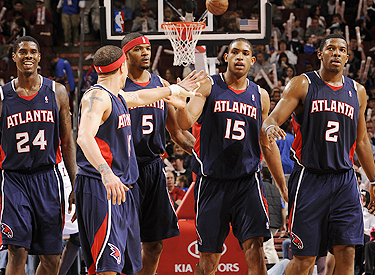 A preview of the 1st round coming up on Tuesday in Atlanta.  However, with both teams locked into their respective seed’s, it will be interesting to see how much they use their star players.  The last thing anybody wants is a meaningless injury…but with the Heat already a bit banged up, they don’t have a ton of options to come off the bench with.