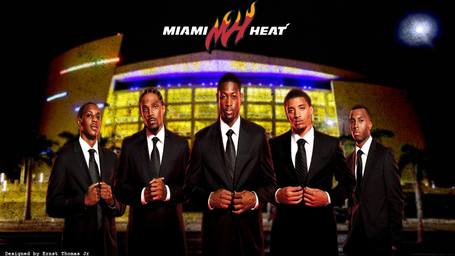 Well...it's finally here.  Heat fans have been waiting two long years for that 'playoff hope', which was abruptly snatched from us when we were swept out of the 1st Round in 2007, a time when we should've been defending our title.  But it's a new season, and a re-vamped Heat squad.

The foundation is the same with captains Udonis Haslem and Dwyane Wade still very much the heart and soul of the team, but a youth movement has come through the AAA, with a couple rookies and a sophomore giving us reasons to believe that this season is only the beginning of things to come.

Now the Heat have the nice combination of youth and experience, something that can be a killer combination, especially in the playoffs. That mix of Heat players has a good idea of what they are about to deal with in their 1st round opponent tomorrow night.

The Hawks have been solid and consistent all season, putting up win after win at home while staying just behind the East's 'top 3' and just ahead of the rest of the conference.  While Miami spent a good part of the regular season trying to leapfrog Atlanta for home court in the playoffs, we'll see just how important the Hawks winning that race will be.

Also, you have to think that all the pressure is on Atlanta.  They are definitely looking back to their 1st round scare against Boson last season along with their solid regular season, and while the Heat get a lot of attention because of Dwyane Wade, that is pretty much the only reason they get any national ink.  Sure, those of us who follow the Heat are aware of the potential this team has and the confidence they have in themselves, knowing that they are fully capable of making a run at the Eastern Conference crown.  But from a national  standpoint, looking all around the web and on ESPN, NBA TV, TNT, etc...that the Hawks are favored and expected to build on their semi-success in last years post-season.  Even D-Wade says that all the pressure is on Atlanta, while the Heat players are loose as can be:

“Is it crucial? No, it’s not crucial,” Wade said when asked if Miami had to win either Game 1 or 2. “I can’t call it with this team. I never know what to expect and that’s good. You just go play. There’s no pressure on us. We’re the underdogs. They have homecourt advantage so they’re supposed to win two at home. We’ll go up there and try to win each game. and then we'll see. It’s not crucial. Of course we want to (win one of the first two games), but it’s not crucial."

The Heat's interior defenders will need to be wary of the Hawks tendency of over-driving.  They get to the foul line a fair amount (25.4 free throws/gm during the regular season), but shot only 73% as a team, good for 28th (3rd worse) in the NBA.

Staying on the subject, should the Hawks get into foul trouble, expect coach Mike Woodson to go to his bench quickly.  Apparently, he has a deep fear of his players fouling out and will go to great lengths to avoid that at all costs.

The Hawks big guys (Al Horford and Josh Smith) can get into foul trouble, and the primary backup for them is Zaza Pachulia, who isn't as good a defender as his aforementioned teammates.  Attacking the rim and getting to the foul line should be a key point on the Heat's dry-erase board at practice.

Dwyane Wade has never lost a 1st round series when healthy, and he is very healthy.  I'm just sayin...

While it looks like the Hawks will be going with Marvin Williams at small forward, Heat Coach Erik Spoelstra still has yet to tip his hat as to who will be starting for the Heat at the 3.  While my money is on Jamario Moon, the guy who Coach Spo has liked in that spot for the better part of the past two months, the real test will be if we can get Michael Beasley around 30 minutes a game.  During the regular season he averaged just under 25 minutes.

He hasn't played since April 3rd in Charlotte, but Udonis Haslem will be back in his starting power forward role, complete with six stitches still in his right thumb.  U-D says that he isn't worried about his shot, but more about how his thumb will get banged up when playing D and going after rebounds.  The Hawks are likely to view his recovering thumb as a target.

In order to prepare for whatever defense the Hawks may throw at him, Dwyane Wade stayed after practice Saturday and worked with four of the Heat's coaches, sometimes playing 1-on-3 against them.  Wade has dealt with all kinds of defensive being thrown at him, and he says it's just a matter of adjusting and finding a way to beat the D-scheme as quickly as possible.

The wait is almost over.  I'm sure most of you are as amped up for this as I am.  Tipoff is at 8, and I'll open up the Game Thread nice and early at 5, so if you feel like just shouting out a 'Go Heat' or have some pre-game thoughts, post em on in there so we can all read up!