As much as I try to be optimistic, I have to be honest and say how frustrating and disappointing it was for me to watch the final minutes of last nights game.  It kills me when we lose a game that literally slips through our fingertips.  It’s nice that Coach Spoelstra stepped up and took the blame for not calling a timeout on the Heat’s opportunity with under 10 seconds left, but I’ve gotta look past the final seconds and see where the game was really lost.

We can start with the 7 missed free throws, the 2nd straight game the Heat have had a poor effort from the line.  Also, Dwyane Wade has got to have a better game if the Heat want to get anywhere.  Going 9-for-20, 23 points and 5-of-6 from the line just isn’t going to cut it.  He should be taking at least 25 shots per game, and only 6 foul shots shows that he was not driving nearly enough.  Jason Kidd played pretty good defense on D-Wade at times, but Wade has shrugged off better defenders before.

As expected, Daequan Cook saw a surge in his minutes, logging 32 big ones against the Mavs.  He didn’t look that bad, closer to his pre-all-star status then he has in a while.  13 points and 3-of-6 from beyond is all right. The key now is for Dae Dae to build off of last night’s performance.  He should come out shooting in this weekends back-to-back matchups and maybe, just maybe…he’ll pull himself out of this slump.

It also grinds my gears when the Heat lose despite having more rebounds and more taken and made free throws then their opposition.

Chris Quinn made it on the court, and was immediately exposed for being the poor defender that he is, and lasted only 3 minutes.  If the Heat aren’t playing a zone on D, Chris Quinn has no business in the game.

Michael Beasley had a great game.  Very solid performance from the rookie, and I loved that Coach Spo had him in at the end.  He got to the line constantly, going 5-for-7 from the line…and he finished with 17 points in 28 well earned minutes.

Jermaine O’Neal finished a meager 4-of-15 from the field and was reduced to 25 minutes, and was on the bench during crunch time in the 4th quarter.  He had 7 rebounds though…so is everybody happy?

Mario Chalmers…another supreme effort.  I think he may be getting into a groove, and doing it at a high level.

The Nets beat Detroit, who are now in a tailspin.  Tomorrow’s games:
Milwaukee @ Philly- Remember the Bucks?  We played them at home last week…so how you think Philly’s gonna do? 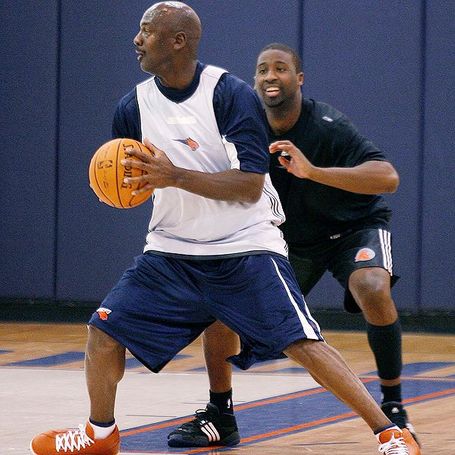 Back-to-back games in Charlotte and D.C. should give the Heat a nice workout.  The Bobcats have been playing well, and the Wizards…um, they have Gilbert Arenas back.  Meh, they’re still pretty bad.