Share All sharing options for: Monday updates from Atlanta 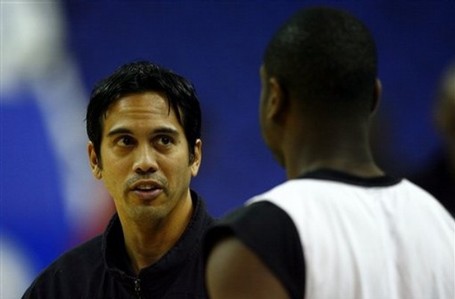 Nobody noticed how bad I did during game 1...right Dwyane?

Some notes from as the Heat practiced today at Phillips Arena:

Udonis Haslem had the 6 stitches in his thumb removed shortly after game 1 on Sunday.  Then he told everyone how he has been secretly keeping all the stitches he’s accumulated this season.  He keeps them in a small container at home and is up to 20 after suffering cuts to his thumb and both eyes.  Haslem wasn’t the only Heat player getting some work done on themselves after game one, as Michael Beasley had a friend come to his hotel room and braid his hair.  From what I’m hearing it’s a funny look for the already goofy Beasley, who wore braids until he was 14-15 years old.  Other then poking fun at Beasley’s hair, Coach Spo said that Jamaal Magloire would definitely see playing time in game 2.  He wouldn’t say for sure if there would be another lineup change at the small forward spot, but will likely go with James Jones again as the starter.   I think they need to get Jamario Moon out there for 15-20 minutes, at least.  He is the athletic guy that is better suited to keep pace with the young Hawks.  Mario Chalmers sat out Monday’s practice with a slightly twisted ankle, but is expected back at practice on Tuesday.  Chalmers was still present during team video sessions where Coaches went over how poorly the Heat looking trying to inbound the ball on Sunday, which many times involved Mario.  That’s about all the news today, and the only thing I want to add is that I hope during their video sessions they started breaking down how to slow up the Hawks.  After watching parts of the game over again today something that really stood out to me was how easily the Hawks were getting open in transition.  Obviously the glaring part of that were the many Josh Smith dunks (I think I counted 5 including 3 ally-oops, but I could be off), but there were other times where a man would be left all alone in the corner or under the rim that went unnoticed.