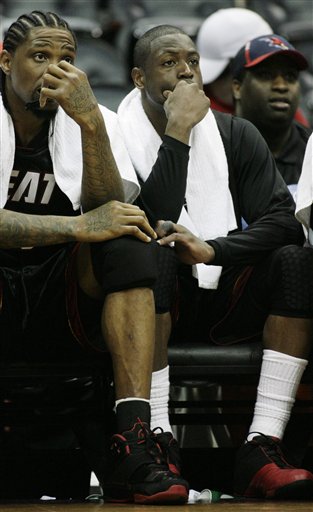 Looking back at Game 1 there is one glaring stat that, to me, has a lot to do with why the Heat never could get back into the game. They shot 4-for-23 from beyond the arc and 26-of-71 overall from the field (36.6%) Leading up to the series I said several times that the Heat will need to hit their outside shots if they wanted to compete with . The three Heat starters that are our ‘shooters’ (Wade, Chalmers and Jones) shot a combined 3-of-14 from three-land, with our bench shooters (Cook, Beasley) going 0-for-7. I hope that the despicable shooting effort was a giant wake-up call for the Heat…because otherwise this 1st round series is going to be a repeat of 2007.

Two guys who did not get nearly enough minutes in game 1 were Jamario Moon and Jamaal Magloire. I felt that both players could have been very useful against the Hawks, with Moon being the athletic, long-limbed Marion-like forward who can keep up with the running Hawks, play solid D and even drop in a couple outside shots. Magloire had been playing great over the final month of the season, and should’ve been inserted into the midst of the Hawks painted area. I say ‘Hawks painted area’ because they claimed it for themselves early in the game and the Heat never really put up a fight to get it back. Jermaine O’Neal has been an enigma for me, and a target for most Heat fans. I have been very reserved with my criticism’s of J-O because I appreciate how he makes the game easier for his teammates, as well as his defense and shot-blocking ability. But when he provides no offense (5 points on 5 shots), no rebounds (1 in each half), and more turnovers (3) then blocks (1) in a playoff game, my understanding and approval begin to waiver.

One thing is for sure: Jermaine will come out tonight and either try way too hard to make things happen (like D-Wade in game 1), or have the kind of game he feels he should be having every night, according to his constant post-game comments basically saying ‘this isn’t how I play’. The more I hear him say that crap, the more it upsets me. I could care less how you ‘think’ you should be playing…you either play well or you don’t, but don’t insult our intelligence by telling us we’re the wrong ones for not believing in you. Maybe after a couple playoff double doubles we can talk Jermaine…but until then, hush up and play.

I think there are a couple of guys who can have a big impact for the Heat on defense if they do the things they did for us all season. Our starting backcourt of Mario Chalmers and Dwyane Wade showed us all season how they were very possibly the best defensive starting guard tandem in the league. Both players know how to hustle on D and get their hands in the passing lanes, grabbing steals and causing turnovers. Wade is also a great shot blocker, perhaps the best shot blocking 2-guard in the NBA. The two players combined for 5 steals, no blocks and 11 turnovers in Game 1.

THINGS TO CONSIDER Chalmers said after practice on Tuesday that his ankle problems are over and he’ll be ready to go for game 2. I guess that is the ‘excuse’ for not playing well in game 1…though we didn’t hear anything about his ankle before, during or immediately after Sunday’s game. On the other end of the injury-stick is Daequan Cook who continues to have problems with his right shoulder. He says he is relying more on his legs to make up for the lift that he isn’t getting w/ his arms. is going to need a much better effort on the glass after being out-rebounded 50-35 in game 1. If you remove Michael Beasley from the equation, then the Heat had only 25 boards spread around the other nine players who played on Sunday. While its very important for the Heat to hit their shots (I think I’ve mentioned that once or twice), they can’t continue to just settle for jumpers. It was ridiculous that only got to the foul line 12 times, hitting 8. Ugh. That can not happen again in this series. Erik Spoelstra met with Pat Riley and Micky Arison in the lower level seats of Phillips Arena yesterday morning. Hopefully Riley did most of the talking while Spoelstra listened and took notes. Maybe Riley should show Coach Spo some tapes of the Heat-Knicks playoff battles and remind him of how tough a team has to get in the Playoffs. Two things that happened in game 1 that aren’t likely to happen again in game 2: ’s great defense (they aren’t nearly as good a defensive team as they looked on Sunday) and ’s poor shooting. The Hawks elevated their game for the second season…time for the Heat and their youngsters to do the same.