Heat even series with 15-point win in Atlanta

Share All sharing options for: Heat even series with 15-point win in Atlanta 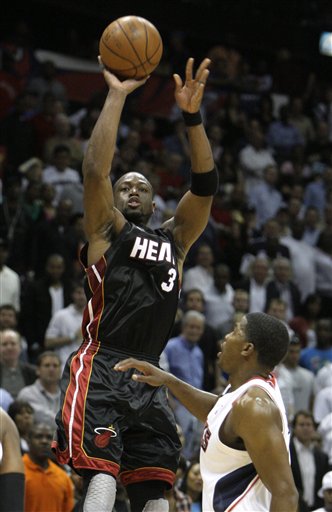 D-Wade putting up one of his 6 trays. Notice the inside-out knee pads?

Now THAT is what I'm talking about!  This was exactly the kind of game the Heat need to play if they want to make some noise in the NBA Playoffs.  They got contributions from all over the lineup, with outside shots going down from all over the court.  D-Wade led the way, but I think the unsung hero of this game is Daequan Cook, who came out of nowhere to hit six 3-pointers and score 20 points on 7-of-12 shooting (6-of-9 from 3).  Cook and Wade both hit 6 from beyond the arc...nasty.  Let's get to the recap, shall we?

After getting the first bucket of the game (just like game 1), the Heat were then called for a moving screen on back-to-back offensive possessions.  As if those blunders weren't enough for the first few minutes, James Jones was called for a defensive 3-second violation twice in the first 4 minutes.  Miami would settle down however, with James Jones hitting a three and D-Wade getting to the foul line just over 5 minutes into the game.  He knew that there was no way he could have a repeat performance of what he did in game 1.

Mario Chalmers had to come out of the game earlier then he'd like when he committed his 2nd foul on Mike Bibby with 3½ minutes left in the 1st quarter.  Daequan Cook came off the bench to join Wade in the backcourt.  Cook wasn't wearing the protective sleeve on his right shoulder, and it made quite the difference.  Cook looked very quick when he came into the game and hit his first two three-point attempts.  Chalmers only got back in the game for a few minutes in the 2nd quarter before a touchy offensive foul call would sit him down for the remainder of the 1st half.

Michael Beasley came out still looking like he was jittery on offense.  His first jumper, a wide open 18-footer, clanked off the back iron, then shortly after he missed his first layup.  He also missed his first free throw.  He briefly got it going in the 2nd quarter sinking two straight jumpers, but just couldn't find his groove in the 1st half.

Dwyane Wade equaled his Game 1 free throw effort with 4 in the 1st quarter.  You could tell he was adjusting to the Hawks swarming him on offense, as Wade was constantly making fakes when holding the ball.  One drive in particular I saw him make 2 separate ball fakes while driving, just to pass it out in another direction for a wide open Daequan tray. He did so much driving with the ball in the 1st half that the Hawks started waiting for him and collapsing on him in the paint, so Dwyane stopped driving.  As the 2nd quarter closed Wade would hit five straight jumpers including three 3-pointers, scoring the final 13 points of the half for the Heat.  He finished the first half with 21 points (and 4 trays) in 20 minutes, and the Heat were up by 13.

The 3rd quarter went by in a flash.  Miami built on their halftime lead, keeping the Hawks at bay with great D.  The Heat did a good job keeping the crowd out of the game, but they needed to close out the 3rd quarter on a high. Michael Beasley and Daequan Cook hit back-to-back 3's to put the Heat up by 16, but a D-Wade turnover and a Ronald Murray buzzer beating 3 closed the gap to 11 going into the 4th.

Daequan Cook opened the final quarter hitting a three, but the Heat's D was starting to lag.  Mario Chalmers turned the ball over on the next Heat possession which led to a second straight Hawks bucket in the paint.  Then after a Jamaal Magloire foul on Ronald Murray, Josh Smith thought it was too hard of a foul and shoved Magloire to the ground.  A small scuffle ensued which led to Smith and Mario Chalmers each getting T-ed up.  That would be the extent of the extra curricular activities.

Michael Beasley scored on a couple nice drives, but then a quick Mike Bibby 3 cut the lead to 10 with 8 minutes left.  The next two Heat offensive possessions were pretty sad; they didn't realize the shot clock was expiring and Michael Beasley was left holding the ball outside the three-point line with his back to the bucket when the buzzer went off, then Jermaine O'Neal was called for an offensive foul backing down Zaza Pachulia.  After both teams went over two minutes without a basket, Joe Johnson hit a 3 and the Heat lead was 7.  Miami was really struggling to get anything going on offense while Atlanta started to figure things out on their side of the floor.  Wade committed his 5th foul on a Ronald Murray 2nd chance jumper, and the lead was 5 with just under 5 minutes left.

All of a sudden Udonis Haslem woke up, hitting back-to-back long jumpers to push the lead to 7 with under 4 minutes left.  The Heat got lucky when Joe Johnson missed 2 foul shots, then a long two-pointer after the Hawks controlled the rebound.  As the clock continued to wind down, Dwyane Wade hit the biggest shot of the 2nd half.  With the shot clock at 1, he fired up a 24-foot desperate three-pointer that went off the glass and in, putting the Heat back up by 10 with 2:40 left.  After a miss by Joe Johnson, Daequan Cook hit his 6th three as the shot clock expired to put the Heat up 13 with 1:19 left, and that was that.

Anyone notice how Mike Bibby likes to initiate contact and then send his arms flailing in the air as though he was just hit?  Seems to work almost as well as the D-Wade pump-fake when trying to draw a foul, but luckily he doesn't try it nearly as much.

Jermaine O'Neal was getting the ball early, as expected, but missed his first two shot attempts.  After not getting any touches for about 5 minutes, he would hit his first shot and then take a great Wade pass and slam it home.  He had a solid 1st quarter, with 6 points, 3 boards and 2 assists.  He very quietly had an amazingly productive game, scoring 19 points with 6 boards and 4 HUGE blocks.

The fifteen 3-pointers by the Heat were a new team playoff record.

Miami's bench was huge, scoring 17 points with 12 boards in the 1st half, then another 20 points in the 2nd half.

Udonis Haslem blended into the background for 3 quarters, playing his role and keeping Josh Smith quiet didn't merit him any spotlight.  His 6 points in the final minutes of the 4th quarter showed Heat fans yet again that Udonis will always be there when called upon.  As D-Wade said after the game, Haslem is the heart and soul of this team.

Jamario Moon was another Heat player you may not have noticed much, but played a great game.  Moon had 8 boards and a huge tray for the Heat, but like Udonis, it was his D that stands out for me.

Don't be deceived by his stat-line...Jamaal Magloire made an impact in his limited minutes.  He succeeded in upsetting some of the Hawks players, caused a mini-skirmish, and even barked at a Hawks fan who had some choice words for Magloire as he headed towards the Heat bench after a timeout.

Mario Chalmers is struggling thus far in the series, but is still finding ways to be productive.  Tonight, it was his 7 assists and 3 timely steals.  Eventually, he'll find his shot, but the key is for him to stay confident.

D-Wade got a 'pep-talk' from Alonzo Mourning just before last nights game.  He may be retired, but Zo is still a big part of this franchise.  The Heat improved to 18-1 in playoff games that Wade scores at least 30 points.