Share All sharing options for: 48 Hours of Intense Heat 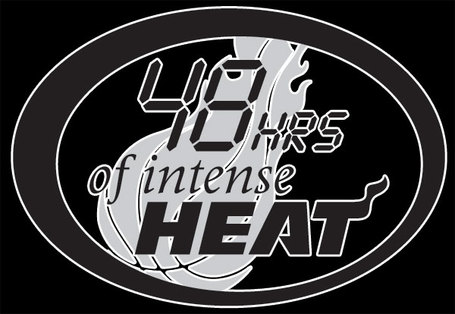 I have to give some serious props to the people making the effort for 2 free tickets to every Heat home playoff game this year.  All they have to do is sit outside the AAA for 48 straight hours.  Crazy, right?

While there plenty of people who gave it a shot at first, as of 12:15 today there were only 22 people left sitting outside the Arena with 'only' 29 hours to go.  The sitting marathon began at 5pm Thursday afternoon, ending at 5 on Saturday only 90 minutes before the tipoff of Game 3.

Another incentive for the Heat fans is that the team will be giving away 2 lower level season tickets, including parking and food vouchers, for the 09-10 season.  Also included in the Grand Prize is a 7-day Carnival cruise, a team-autographed basketball and a $200 voucher for the Miami Hoops Gear store.  That's almost $9,000 worth of goodies for the winner.  The fans will be quizzed on Heat trivia to figure out who gets the Grand Prize, but there can only be one winner.

The Heat are making it a little easier on some of the fans.  They have a prize wheel out there that the fans are occasionally allowed to spin.  Prizes include breaks from the 'Black is Back' chairs to lay in a very comfrotable pillow-topped mattress bed which is on site, as well as 30 minutes in the air conditioning of a Heat-Black van, water balloon fights to keep cool and other 'Heat breaks'.

I'm rooting for each and every one of those dedicated Heat fans who are almost half-way home.