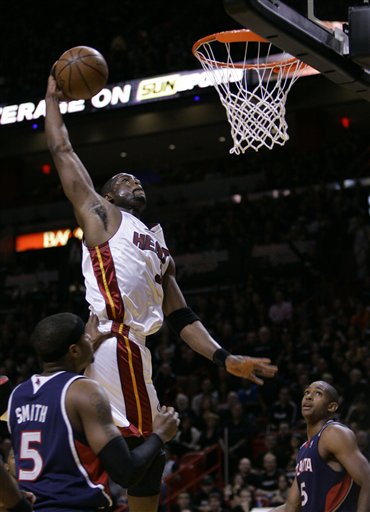 Now THAT'S what I'm talking about!  The Heat returned home to a packed house draped in black and gave them a heck of a show. The fans were loud from the get-go, screaming "Dee-fense" amazingly loud on the Hawks first possession after they controlled the opening tip, and kept it up throughout the game.  I'd like to think that Miami was feeding off of their fans, as the Heat dominated (for the most part) the entire game, led by their starters who set the tone with great execution on both ends of the floor.

I know it's somewhat insignificant, but for the 3rd straight game the Heat opened the scoring.  This time it was Udonis Haslem putting back a missed D-Wade jumper.  It was an appropriate start for U-D, who had a monster first quarter.  He pulled down 9 boards and added 4 points and an assist.  It helped that Atlanta started off only 2-of-14 from the field as well, but the Heat weren't letting the Hawks get any easy looks.

I can't say enough about the effort and hustle displayed by the Heat in the first half.  After a great win in Game 2 that saw the Heat basically shoot the lights out at Phillips Arena, there very well could have been a drop-off in play.  The Miami coaching staff would have none of that, as they had plenty of video footage of things to improve on for Miami to go over during the two days between games.

The Hawks got off to a quick start in the 2nd quarter, scoring the first 9 points to draw within a point of the Heat after being outscored 22-12 in the opening quarter.  Atlanta's hot start would be short lived as the Heat quickly countered with a 9-2 run of their own and overall outscored the Hawks 28-8 after the Hawks fast start to the quarter.  The glaring difference between this game and Game 2 was that the Heat starters were all playing superb and in doing so took a lot of pressure off of the bench.  A Jamario Moon buzzer beater at the end of the 1st quarter and a Michael Beasley layup in the 2nd were the only points to come from Heat reserves during the opening half.

Atlanta tried making it a game in the 3rd quarter, pretty much matching the Heat bucket-for-bucket while trying to chip away at a 21-point halftime deficit.  They managed to get the Heat's lead down to 11 by using a late 9-2 run, but a big James Jones tray with a second left in the quarter put the Heat up 14, re-igniting the crowd and dealing Atlanta another demoralizing blow.

The Heat bench hadn't scored since Michael Beasley's layup with 6:47 remaining in the 1st half until Daequan Cook hit his first three-pointer of the game 2:16 in the 4th quarter, which put the Heat up 83-62.  It was part of an 8-1 run to open the period, only adding to the previously mentioned back-breaking tray by J.J. at the end of the 3rd.   The Heat were now up by 23, and the game was all but over.  Seems to me that as soon as Miami figured out that if they stop Atlanta from running all over then, the Hawks offense would suddenly have trouble being the ‘highlight factory' they seem to like calling themselves.  The only highlight factory that I'm aware of is a small house in Robbins, Illinois where a young man named Dwyane Wade grew up.

Now don't get me wrong, the Heat deserve plenty of credit for their dismantling of the Hawks last night, but an inactive Marvin Williams on an already short list of small forwards definitely helped.

While they didn't match their record setting performance from three-land in Game 3, they would set a franchise mark for free-throw percentage.  I'd say so...the Heat shot an amazingly incredibly perfect 19-of-19 from the charity stripe.  100%.  Store this one in your memory banks, as this is a record that will not likely be met for a long time.

All five of the Heat's starters finished in double figures in scoring.  They combined for 89 points, which was good enough to out score Atlanta without any help from the bench.

Jermaine O'Neal had another great game, getting his offense going early and often.  His jumper was clicking and he seemed to get into the paint easier tonight then in the first two games.  He finished with 22 points on 7-of-14 shooting (and 8-for-8 from the foul line) and added 10 boards for very nice double double.  I think you will all agree with me that a 20-10 double double is something many teams would love to get from their center, and something I hope will get Jermaine some well deserved praise from the Heat faithful.

Another double double went to Udonis Haslem.  It seemed a forgone conclusion after he nabbed 9 boards in the 1st quarter (which tied P.J. Brown for the team playoff record for boards in a quarter), but his 12 points on 6-of-9 shooting should quiet any doubters that his lacerated thumb was hindering his jumper.  He did have a couple nice dunks thanks to D-Wade assists, and added 2 assists, a steal and a block to round out his score sheet.

Wade had another ‘usual' great game with 29 points on 10-of-21 shooting and 4 more three-pointers.  He hit all 5 of his free throws, but seems to be relying more on his jumper against the paint-clogging Hawks, which is why he isn't getting to the foul line as much as usual.  But as long as he's hitting his J's then it's all good.  He added 7 rebounds and 8 assists, but was leading by example on D, hustling all over the place.  He also added four blocks, a couple of which were quite memorable, but what stood out to me (other then his 4 trays) were two particular dunks.  One came off of a missed Wade jumper; Udonis grabbed the offensive board and Wade immediately drove towards the hoop.  U-D hit Wade in stride and nobody tried to stand in his way, including Josh Smith who wisely backed off.  The second dunk was off a nice feed from Jermaine O'Neal as Wade caught the ball and made a mid-air change of direction, avoiding two Hawks players and igniting the crowd yet again.

Mario Chalmers finally broke out on offense, starting off hitting his first three shots and finishing with 15 points, 5 rebounds, 3 assists, 4 steals and a block.  He went 3-of-6 from beyond, and it was nice to see his jumper looking good again.  He still struggled playing one-on-one D against Bibby, but I can live with that if he keeps hitting his shots.

On the other hand, Michael Beasley still can't get his jumper going.  He went just 1-of-9 from the field, and as I noted earlier, that one was a layup.  He finished the night on a semi-positive, hitting two late free throws to keep the Heat's perfect percentage intact.  We may be winning right now without Beasley playing the way he did during the final two weeks of the regular season, but I think you all know as well as I do that B-Easy's offense is key to the Heat's ultimate success in these playoffs.

Jamario Moon was limited to only 5 minutes after suffering an abdominal strain early in the 2nd quarter.  Moon, who has been battling a groin injury, is possibly done for the series.  This means James Jones will need to step up, and he did so tonight, going 3-for-3 from beyond the arc and 4-of-5 overall in 32 minutes.