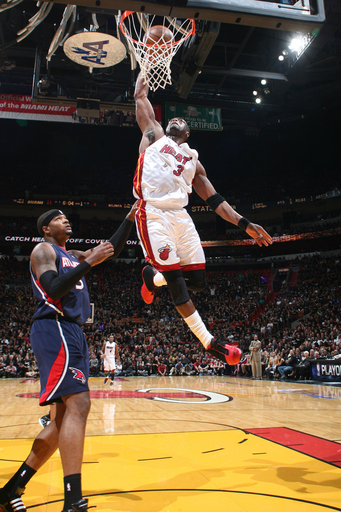 After their stunning and convincing wins in Games 2 and 3, the Heat have given themselves a new opportunity....the opportunity for a ‘let-down' game.  Miami utilized their home court advantage big time on Saturday, and they'll need to do it again tonight if they want to put a strangle-hold on this series.  The alternative, however, would make the series a best-of-three with two games coming at Phillips Arena, where the Hawks would certainly be confidant that they could win both games.  Heck, should the Hawks force that scenario, they would also feel like they could end the series in six after getting a win in the ‘black (is back) hole' of Miami.

There have been plenty of stories coming out of Atlanta that Hawks coach Mike Woodson is not only coaching for his teams playoff lives, but also for his job.  But instead of being the confident coach of a team that had their best season in years and claimed home-court advantage (where they won 31 games during the regular season), they are treating the Heat like they are the favorites.  Let's also remember that Atlanta beat Miami in Miami by 15 points earlier this season.  Instead of talking about the ways they can beat Miami, all I'm hearing are excuses coming from the Hawks Coach:

"Hey listen, you've got O'Neal who's been a six, seven-time All-Star. You've got Haslem who's played championship basketball. I mean, they've got guys, veteran enough guys that have been through the battles. My guys haven't been battle tested. It's something new for our basketball team."

Tonight's game will be the first time during this series that there is only one day between games.  I think this works to the advantage to everyone except the coaches, as I'm sure they will tell you...the more time to prepare, the better.  But as far as the players and fans are concerned, this is much better.  The players can build on their emotions and any positive things they want to take out of the previous game, and the fans...well, we just don't have to wait that extra day while watching other teams that aren't ours.  Although I will say that there have been some sick games thus far in the playoffs.  If you haven't already noticed, I don't like to stray from the Heat on this site, but that Celtics-Bulls series is something sick. Also, the Magic-Sixers matchup has been pretty darn good as well, and both of those series' provided great games on Sunday.  It's too bad that when/if the Heat move on to round 2 they won't face any of those teams.  It would be a Wade/LeBron battle that I'm sure would get a ton of press and coverage.  That's all I'm going to say about our potential adversary, as I've wandered away from the task at hand long enough.

It's been great to see almost our entire roster stepping up their game for the Playoffs, but one guy who has been struggling is an enigma to me.  I mean, seriously, what has happened to the unflappable (or so I thought) Michael Beasley.  He has completely lost the touch on his jumper, which in my opinion has been the best and most consistent part of his offensive game all season.  From day one, he has had a beautiful looking jumper.  His shots have fallen all year, whether they come from 10 feet or 21.  He is still averaging 7.7 rebounds a game, so you know he is hustling and doing everything he did before the playoffs, but his 8.7 points on 11-for-36 shooting (30%) is far from his norm.  I did a little research, and B-Easy has gone just 5-of-25 on his jump shots, which includes anything that wasn't from within a few feet of the bucket.  If the Hawks are smart, they wont back off Beasley...any shooter will tell you they eventually, the shots start falling again, you just gotta keep shooting.

There has not been enough attention dedicated to how well James Jones is playing in this series.  Sure, he isn't putting up staggering numbers by any means, but if you watch him on the floor he is hustling his butt off, playing stellar defense on whoever he is matched up on (it gets switched several times depending on each teams on-court personnel) and hitting the few shots he is taking.  He's made 9-of-15 shots thus far in the series (60%) and is 5-of-9 from three-land, including a perfect 3-for-3 in Game 3.

Not only is D-Wade hitting more treys then he ever has in the playoffs, and more consistently then he did during most of the season (other then the final couple months), but have you noticed that when they go in...the net barely moves?  You can chalk it up to focus, constant practice, or the fact that the ‘Jordan gene' (that's Michael Jordan) is finally taking over.

Marvin Williams is still dealing with a severe wrist sprain and didn't take any shots during the Hawks practice at the AAA today.  He says it's still very sore and is having trouble with its range of motion.  An MRI came back negative, so as soon he feels up to it, he's good to go.  As of now he is a game-time decision for tonight's game.

Jamario Moon will be sitting out Game 4 and his status for the rest of the series is still unknown.  With Moon out, D-Wade will spend more time guarding Joe Johnson, and Wade did a pretty great job chasing him around and contesting his shots during Game 3.  He was commended after the game by Coach Spoelstra, who said it was the best D that Wade had played in a playoff game in his career.

Coming off of his most productive game in a Heat uniform, Jermaine O'Neal had this to say about the importance of winning Game 4:

"Winning (Game 2) in Atlanta doesn't mean nothing if we don't take care of business Monday as well, and we understand that."

Considering he hasn't taken a shot, Jamaal Magloire has done a darn good job during his limited minutes (24) in games 2 and 3. His physical presence and hard-nosed attitude seems to be just what Miami needed to counter the Hawks dominating nature in the paint.

Let's take a look at the team playoff records that the Heat have either set or tied in the three games they have played thus far:

Rebounds in a quarter- Udonis Haslem with 9 (Game 3)

Also, personal high's for three-pointers made by Dwyane Wade and Daequan Cook, who both hit 6 in Game 2.