Share All sharing options for: Total team effort leads to poor results as Hawks even series at 2 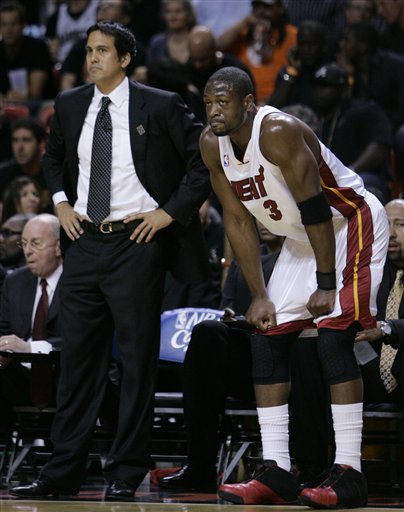 I still can't believe that the Heat went from playing so well in Game 3 to that garbage they put out there last night.  It started with 1st half full of fouls that got both teams off their planned rotations, so don't go blaming Spoelstra for having guys like Joel Anthony and Diawara out there.  He may have waited too long before putting James Jones back out there with 5 fouls, but the result of this game shouldn't be riding on having Jones on the court.  D-Wade was awful until the game was out of reach; Beasley was non-existent, as was Daequan Cook.  Let's just get to the recap, as I'm sure most of you can't wait to get through reading this, but I do appreciate you toughing it out.

The Hawks came out playing very well on D, hustling all over the place.  However, the over-aggressiveness led to starters Maurice Evans and Al Horford both committing two quick fouls in the first 5 minutes.  Still, they were throwing double teams at D-Wade and Jermaine O'Neal and held Miami without a field goal for the first 6:35 of the game.  Meanwhile, the Hawks seemed to be trying whatever they could to score on offense.  Their first 10 points came on field goals from five different players.

D-Wade started out his shooting night with four missed field goals, including three airballs.  He finally hit his first shot on a nice layup with 2 minutes left in the 1st quarter.  It was only the 3rd field goal hit by the Heat in ten attempts, yet they were still only down by 3.  That wouldn't last as Atlanta would score 6 straight points on three free-throws and a Bibby trey where he was being guarded by Jamaal Magloire...right after Magloire had a dunk attempt blocked by Josh Smith.  The Heat closed the quarter on a long touchdown pass from Daequan Cook to Wade for a dunk.

Michael Beasley came into the game late in the first quarter after Udonis committed his 2nd foul, and the rookie picked up right where he left off, missing his first two shots.  The Hawks once again stretched their lead to nine, and this game was feeling pretty nauseating with the combination of the lack of Heat offense and the few hundred foul calls by the refs who seemed to want to control the game.  I hate when officials try doing that, I much rather prefer for them to let the players play.

The game just got worse for Miami as they would keep looking awful on offense.  Jermaine O'Neal got blocked by Josh Smith on two straight attempts (both times he had an open teammate under the rim) and Miami was not passing the ball around at all.  Meanwhile, they couldn't keep the Hawks off the foul line, putting them into the bonus less then 4 minutes into the 2nd quarter.  Suddenly they found themselves down by 17 as half-way through the quarter the Hawks were outscoring the Heat 14-4.  Wade had just fired up his 4th airball and Miami was looking completely lost.

With the 1st half winding down and the game slowing slipping out of reach (the Heat were down 44-23 with 3:47 left), Miami stepped up their defense and suddenly their offense found it's spark.  A couple free throws by D-Wade and James Jones got it started, then Jones was fouled while making a three, and after he completed the 4-point play the Heat were down 13.  Then on the ensuing inbound pass, Mike Bibby fouled Mario Chalmers and it was Heat ball once again.  Bibby wasn't done, as on the Heat's gift possession he'd foul James Jones while taking a three AGAIN, and AGAIN the shot went down!  Suddenly the Heat had closed the deficit to under 10 points in under 90 seconds.  They weren't finished there, as after a couple Haslem dunks and Wade's first three-pointer, the Heat would ride a 19-2 run into the half and were down only 4.  It was one of, if not the craziest turnaround in such a short amount of time I could remember seeing in an NBA game.

Unfortunately the Heat didn't get off to the quick start we'd have preferred in the 3rd quarter, and instead of running their offense, took (and missed) 2 quick treys and turned the ball over twice while Atlanta stretched their lead back to 8.  Thanks to another James Jones three and more solid D from the Heat, they would keep close in a quarter that would go by quicker then either of the 2 in the 1st half.  A 7-0 Miami run would turn a 10-point Hawks lead into 3, but Wade was still only 3-for-15 and couldn't get anything going on offense.  But as was the trend during the game, the Hawks would once again expand their lead by closing the quarter on an 8-3 run, and went into the final period up by 8.

The way Miami started the 4th quarter made me pretty ill.  Two terrible offensive possessions where Chalmers missed two shots (one of which was a drive that concluded with what looked like a shot with his back to the rim) and another Michael Beasley miss.  The Hawks took advantage, scoring 4 quick points and expanding their lead to 12.  The only thing quieter then the crowd was the Heat's shooting effort.  The continuously were missing shot after shot, and when D-Wade finally got something going for Miami, scoring 10-straight points, the Heat couldn't get a stop on defense.

Just so you guys know...Wade is blaming his poor night on back spasms.  He couldn't drive the ball, so he relied on his jumpers.  But wait, he couldn't shoot either.  I'd accept that if he hadn't, all of a sudden, start drilling J's like it was nothing half-way through the 4th quarter.

A telling stat...the Hawks didn't commit a foul in the 4th quarter until just over 2 minutes were left.  That's because all Miami was doing was chucking up poor jumpshots.

I'm standing firm on that the ref's ruined this game from the start.  Way too many fouls caused the game to drag, keeping the players from having any kind of flow. Plays that were let go in Game 3 were being whistled last night. This is the Playoffs...let the friggin players play.

The heat quickly squashed the possibility of another perfect night from the foul line when Jermaine O'Neal missed his first free throw attempt 68 seconds into the game.

Have you ever seen a series where the ‘favorite' has changed from game-to-game?  After Game 3 it was all about Miami, now its back to being all about Atlanta.  This is why the press shouldn't be taken too seriously; all they do is pander to the masses.

Jermaine O'Neal had another solid game, his 3rd in a row.  20 points on 7-of-11 shooting and 6 boards, but no blocks is a bit concerning.  He was also owned on the glass by a backup center (Zaza Pachulia who had 18 rebounds), but that is slightly misleading.  He is often out of position for rebounds because he goes for blocks on almost every opportunity.

The Heat bench was atrocious.    They combined for almost 50 minutes divided among the five reserves who played, but got only 2 points, 8 rebounds, 1 assist, 1 steal and 1 block.  They shot a collective 0-for-7 from the field.  Just terrible.

It's tough to get veteran leadership in a playoff series when your point guard and best option off the bench are rookies, and boy-o-boy did it show tonight.  We know how Beasley has been struggling, so I'm not going there, but Chalmers was pretty bad tonight as well.  He took only 4 shots, making 1.  His amount of turnovers (4) equaled his combined rebounds and assists (3 and 1).  He did grab 4 steals...but when your starting point guard gets only 1 assist and 4 points, he isn't doing his job.

The only thing I'll call Erik Spoelstra out on is keeping James Jones on the bench for 6 minutes during the 4th quarter.  He was our best offensive player last night and I could care less if he has 5 fouls.  While he isn't our 1st scoring option, he should have been out there.  Maybe him fouling out would've caused Wade to step up earlier then he did.  Either way, it was a game full of things to be pissed about...this was just one of them.  I wouldn't say it cost us the game, so don't go blaming Spoelstra for the loss.  This game was lost because our bench was terrible and D-Wade was very un-Wade like.  When Dwyane is off his game, Michael Beasley and Mario Chalmers combine for 6 points and Daequan Cook is held scoreless...the Heat won't win.  Not happening.

One final thought, and I'd love to hear if any of you have noticed this or share my opinion.  Have you seen how Al Horford acts after making any kind of 'big' bucket?  'Big' being a score that added to a run or just came at a good time for Atlanta.  He'll jump up and down in a Heat players face, but it's ok because it appears that he is defending the inbound pass.  But that is the ONLY time he defends that pass.  He acts like a child out there, and it's really annoying.  This is my opinion...for whatever its worth.

Ok guys...file this one away and move on.  Tomorrow is another day and another game.  Despite the results, I had a great time with everyone who came out to the Game Thread.  We had a big crowd tonight (compared to most) and I hope you all come back for Game 5.