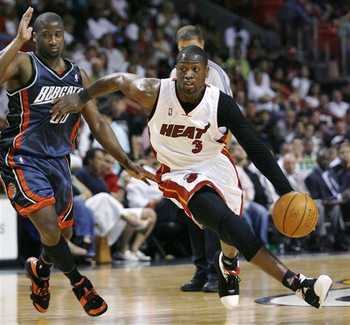 The struggling Heat, losers of 4 out of their last 5 and 3 straight on the road head into Charlotte to face the surging Bobcats.  Both teams are coming off of tough losses, but the Bobcats lost to Boston on a final second shot by Ray Allen in double-OT.  Ouch.  The Heat have been struggling to get wins, but haven’t been playing terribly poor.  They have just played poor when it counts, missing open shots in the clutch minutes, unable to climb over their opponents as games wind down.

Charlotte just completed a 9-5 month of Mach (6-2 at home) that saw all their wins come on three separate 3-game winning streaks. The Heat have been a little confusing for me…I haven’t felt like they have been playing that poorly, but the wins just aren’t coming.  This back-to-back that the Heat have this weekend is completely win-able, but at the same time, nobody would be shocked if they lost both.  After watching the Wizards…the Wizards(!), beat Cleveland last night, I have no idea what to expect from them.  And yes, Agent Zero will be in the lineup against Miami.

Gerald Wallace has been leading the Bobcats lately, filling up all stat categories with his production on both ends of the floor.  The month of March was one of the best of his career, and he’s off to a good start in April.  20 points, 10 boards 4 steals and a block against Boston.

You know what would make me happy?  If Daequan Cook can build on his 3-of-6 from beyond the arc game in Dallas…if he can get back to the days of 4+ three pointers a game. He’ll likely get over 30 minutes in both games this weekend.

Mario Chalmers has been playing very well lately, and he’ll have another fun opportunity against Raymond Felton, who can be great on D, but has trouble bring a consistent effort every game.  He is also coming off a double double against Boston (14pts 12ast).  What’s up with the Celtics?

Oh, and let’s not forget this guy Okafor…he averages a double double and should give Jermaine O’Neal about as much as he can handle in the paint.  The guy averages over 3 offensive rebounds a game…meanwhile O’Neal has really struggled on the glass, but he’s got more rebounds in his last 2 games (14) then he had in the previous 6 (13).

After making a big fuss over rebounding, Michael Beasley hasn’t been doing much on the glass lately.  He has only 11 rebounds in his last 4 games.

Milwaukee gave us hope throughout their game in Philly, but were outscored by 9 in the 4th quarter and the Sixers took over 5th place.  Tomorrow’s Games:
Hawks @ Celtics- Actually wouldn’t be shocked to see a Hawks win over a battered and bruised Celtics team.