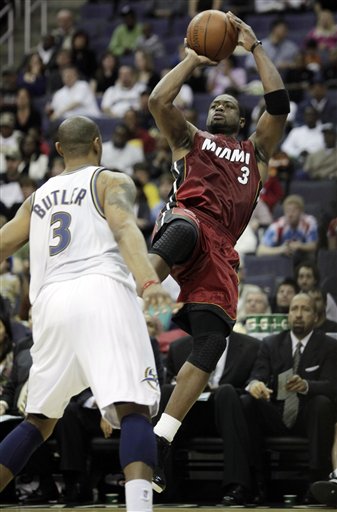 The first quarter was close, but the Heat grabbed a 3-0 lead and never looked back.  While Miami got out to an early 9-point lead, there was only one player on the Wizards who could respond.  Brendan Haywood, playing in his 3rd game after missing 75 with a wrist injury, seemed to have Jermaine O’Neal’s number in the first quarter, scoring the Wizards first 10 points, rather easily.  Caron Butler was the first Wizard other then Haywood to score, doing it with 4:17 left in the 1st quarter.

Another AMAZING play by D-Wade with just under 4 minutes into the game.  He tipped a Dominic McGuire pass out to midcourt where he dribbled the ball around his back on the dribble, then passed it behind his back (all with one hand and in one motion) to a wide open streaking Mario Chalmers for an easy layup.  My description may not have done this play justice…another entry in the Dwyane Wade book of ridiculousness.

Yakhouba Diawara filled in for Udonis tonight and was looking to make an impact early, getting open and hitting a 3 on the Heat’s first offensive possession.  He’d score 5 points and grab a rebound in the first 3 minutes of the game.  Many of the rest of the three pointers he’d take would come up short, clanking off the front iron, but he did hit his last one, adding to the Heat’s ridiculous 3-point barrage in the 4th quarter.

Miami shot 8-for-13 from beyond the arc in the final stanza, and it all started with James Jones.  Jones seemed to regress tonight, missing several open looks.  That was until the 4th quarter, when he hit 3 quick trays in first 2 ½ minutes that propelled the Heat ahead.  The Wizards had drawn to within 1 point when Jones hit the first of his three’s.  He also played very well on D tonight.

Has anyone noticed that it’s been a while since Mario Chalmers has gotten into foul trouble?  It wasn’t that long ago that it was a nightly struggle to keep Super Mario on the floor.

Another rookie moment for Mario Chalmers when he fouled Javaris Crittenton going for a steal, well above the 3-point line, with only 4 seconds left on the shot clock.  Erik Spoelstra was visibly furious on the bench and had D-Wade come in and replace Chalmers instead of Chris Quinn.  Chalmers would ride the bench the rest of the way while Quinn ate up his minutes.

The final nail in the coffin came with 5 minutes left.  Jamario Moon came to the rim off of a high screen and Dwyane made a perfect lob for the ‘Full Moon’ jam.  On the Heat’s next possession, Wade would hit his 4th three of the game, and his 3rd of the quarter.

It was a pleasure to see how happy the Heat were, when in the final minute Jamario Moon had a breakaway and capped it off with a windmill dunk.  The bench exploded in an outburst of joy that I’m sure was long overdue, and to top it off D-Wade was giving Moon his ‘dunk rating’ as Jamario came back down the floor.

In case you were wondering, the reason that Yakhouba Diawara started instead of Michael Beasley was because coaches didn’t want to affect Beasley’s spot in the rotation.  …Rotation?  We have a rotation…?

The Bulls and Sixers both won at home, beating the Nets and Pistons respectively.  The Hawks lost again, their 3rd in a row and 4th in their last 5, including 3 of 4 at home.  The Heat and Sixers are now within 2 games of Atlanta with 5 games remaining.  Tomorrow’s Games:
Charlotte @ Detroit- The Bobcats are still trying to make a run at the 8 seed, and Detroit is fading from Miami’s rear-view.
Philadelphia @ New Jersey- The Nets could REALLY help us out with a win here.  Philly has played 2 at hand on Miami, and this would be one of them. 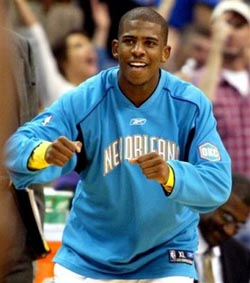 The Heat return home to face Chris Paul and the New Orleans Hornets.  Should be a great test for this new, feisty Heat team…minus Udonis Haslem.