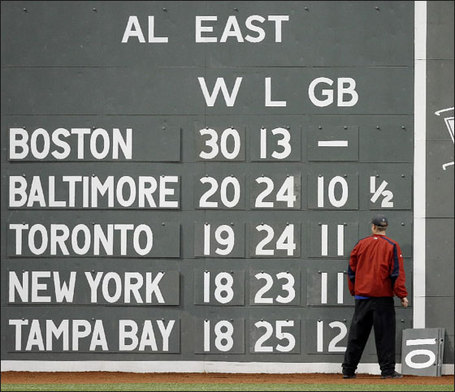 Just a quick heads up on what went down in the Eastern Conference on Sunday.  Detroit beat the Bobcats at home, crushing more of Charlotte’s playoff dreams.  The Pistons moved into a tie with Chicago for 7th place in the East.  The Nets did us a HUGE favor, beating Philadelphia by 29.  The Sixers fell to a half game behind the Heat, still with one game at hand over Miami.

New Orleans, the Heat’s next opponent, lost at home to Utah, only their 2nd win in 18 tries on the road against a team with a winning record.  Here are your up to the second Eastern Conference (bottom half) playoff standings: (I've added games remaining to the graph)

Miami’s next victory will guarantee them at least the 6th seed in the Eastern Conference.  They are 2 games behind Atlanta, both teams having 5 games remaining.  The Hawks have lost 3 in a row, and here is their remaining schedule: @ Toronto, @ Milwaukee, vs. Indiana, vs. Miami and @ Memphis.  Said Atlanta coach Mike Woodson:

"You can have the fourth spot but you have to go out and earn it," Woodson told the Atlanta Journal-Constitution. "We’ve held it for months now and we’re still in the driver’s seat. But we have to handle our business. We have to take care of it ourselves."

Miami’s final 5 games:  vs. New Orleans, @ Boston, vs. NY Knicks, @ Atlanta, vs. Detroit.    Two of the five games are against teams under .500, but the two road games are going to be TOUGH.  Should be exciting, nonetheless.