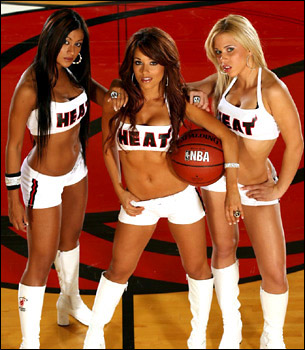 The Heat couldn’t be heading into their showdown with Chris Paul and the Hornets on a higher note.  Miami is coming off of perhaps their best road trip of the season, coming oh-so-close to a win in Dallas, then reeling off back-to-back wins in Charlotte and D.C.  Both teams are entering the home stretch of the season fighting for playoff position.  As we all know, Miami is trying to hold off Philly for the 5th seed, and still has hope to catch Atlanta for the 4 spot and homecourt in the first round.  The 6 seed Hornets are in a dogfight for playoff position in the West, only 2 games behind 3rd place San Antonio but only 1.5 games ahead of 8th place Dallas.

Both teams have struggled with their interior defense, the Hornets especially since they lost Tyson Chandler.  As we know, Dwyane Wade is at his best driving the ball into the paint, and Michael Beasley and Mario Chalmers both have the ability to drive and create, so hopefully that will be in the Heat’s game plan.  Of course, expect the same thing coming at us from the likes of Chris Paul and Peja Stojakovic.

With Udonis Haslem on the shelf for likely the remainder of the regular season, Heat coaches seem to like the idea of starting Yakhouba Diawara at small forward and shifting Jamario Moon to the 4. This may not be the wisest move for tonight though, because I cant see Jamario Moon handling David West on defense (can’t see Beasley doing much better either).  While the move doesn’t give us the most potent starting lineup, it opens the door for more minutes off the bench for Michael Beasley and Daequan Cook.

I'm giving Mario Chalmers a ‘get out of the doghouse free’ card today.  Chris Paul is ridiculously good, and tonight should be a solid learning experience for Chalmers.  Luckily, Paul isn’t the best defender (not too bad, but not great) so Super Mario will have a chance to get it going on offense.

I mentioned earlier the Heat’s difficulty guarding the painted area on defense, and the trouble we could have guarding David West.  Then I remembered how Brendan Haywood was the only Wizard to score for 8 minutes of Saturday’s game in Washington.  Hmm...

Hopefully the Heat’s hot hand from beyond the arc will carry over from their last game.  Both Daequan Cook and James Jones were solid from beyond, and Cook has been hitting for shots for a week.  If they get hot…watch out playoffs, here comes the Heat.  It may not seem like much, but an extra 10 points/game from the bench will go a LONG way in the ‘second season’.

Former Heat player Rasual Butler returns to South Florida with the task of starting opposite of Dwyane Wade.  Butler was torched by Ronnie Brewer in the Hornets last game against Utah, and with little help coming from his defensively lacking teammates, I’d look for D-Wade to have a big night.

No games to report from last night, but plenty going down tonight:
Atlanta @ Toronto- The Raptors had won 6-straight before falling to the Knicks on Sunday.  The Hawks have been struggling, and aren’t the best road team.
Philadelphia @ Charlotte- Philly is a half game back of the Heat and have been playing very inconsistent of late, while Charlotte is in 9th place, 3 games back of Detroit and Chicago with 5 games left…so this is as ‘do-or-die’ as they come for the Bobcats.
New York @ Chicago- The Knicks on the road to face a Bulls team who has won 4 straight at the United Center.  This could get ugly…