Heat fall to Hornets in OT after Butler's game-tying 3

Share All sharing options for: Heat fall to Hornets in OT after Butler's game-tying 3

The way that Miami has been losing games the past few weeks…the playoffs could be exceptionally painful.  The Heat did everything right down the stretch, and even after getting off to a very slow start in OT, came back and were in a prime position to capture the ‘W’, but couldn’t overcome giving up several 2nd chance points and a bad late turnover by D-Wade.  David West also scored 8 straight points in OT, including the dagger as the shot clock expired, right after D-wade had hit a game-tying 3 with 33.4 seconds left.

It was another ugly stat for the Heat, filled with turnovers and botched offensive possessions.  With the score 27-16, Miami began to turn it around with back-to-back solid defensive possessions followed by a Michael Beasley and 1 layup to close out the 1st quarter down ‘only’ 8.  Michael Beasley scored 9 straight points for Miami to close out the 4th quarter, keeping the Heat close in the midst of their poor shooting.

Awesome sequence with 5:20 left in the 1st half when Jermaine O’Neal blocked an Antonio Daniels layup on a fast break, then D-Wade got it at the other end and with his trademark up-fake, he drew a foul and sunk the jumper, kissing it off the glass.  And he absolutely hit the free throw, bringing the Heat to within 2 points of the Hornets.  Unfortunately Miami couldn’t keep the momentum, scoring only 30 points and trailing by 10 after the first half.  The second quarter was just ugly in general, with the 2 teams combining to score only 24 points (13-11 NO).

The Heat opened the 4th quarter on an 8-2 run, tying the game at 56 with just under 9 minutes left.  Even better…the Heat did this with D-Wade on the bench taking his usual final rest before playing the rest of the game.  Later in the 4th Miami would use a 13-3 run to go up by 3 with 63 seconds left, and were up by 4 with as little as 24 seconds left.

Then, a Chris Paul field goal followed by D-Wade going only 1-of-2 from the line would give the Hornets the ball with 10.6 seconds left.  On a play that looked like it was leading to a Heat victory, Rasual Butler hit desperation 3 just as time expired, sending the game into overtime.

Peja Stojakovic seemed pretty excited to be back in the starting lineup, opening the game with back-to-back three’s for the Hornets.

It was nice to see former Heat player Sean Marks.  He was a bit of a fan favorite back in the day, and its nice to see that he’s still in the league and doing a good job.   He played a pretty good game, and even caught a nice ally-oop from CP3.

D-Wade received his 10th technical foul of the year after throwing the ball at the padding of the basket-pole when he was called for an offensive foul.  He later would be ejected in the final seconds after receiving his 2nd T of the game, bumping his season total up to 11. He leads the team in that category.

Wade also recorded a steal for the 21st straight game.  The Heat record is 27 straight games, by Sherman Douglas.

Michael Beasley’s jumper to open the 4th quarter gave him 17 points and gave the Heat 50 points.  Only took them 36 minutes to get there…but the crazy part is that they were only down by 4 at 54-50.

Beasley may not have been a starter, but he certainly earned a starters minutes.  He played 48 minutes and made them count, scoring 25 points on 9-for-16 shooting while grabbing 9 boards and going 6-of-7 from the line.  He also opened the 2nd half on the court for Miami, the first time he has started a half since Udonis Haslem went down.

You have to start appreciating the effort that comes from Jamaal Magloire off the bench.  He has become the clear-cut backup center, and solidified his spot by playing strong D and going after rebounds like crazy.

I think the trend we’re seeing from Jermaine O’Neal is that he seems to focus on offense in the first half, then goes after rebounds in the 2nd.  Another rebound-less 1st half for Jermaine last night, but he did score 2 points.  Then in the 2nd half he woke up on the glass, grabbing 7 boards.  Still didn’t score though…

He’s doing it in small does, but it appears that James Jones shot is almost back.  He hit another three 3-pointers tonight, 2 of them were big 4th quarter trays in the final minutes.

Daequan Cook sat out with a strained right shoulder and is listed as day-to-day, but hopefully the extra day off before Friday’s game in Boston will allow Cook to heal in time to play.

The Hawks got a big road win north of the border, beating the Raptors by 8.  The Bobcats hooked us up by beating the Sixers at home, so the Heat remained a half game up on Philly.  The Bulls also won at home, beating the Knicks and moving a half game ahead of idle Detroit.  Tomorrow’s Games:
Detroit @ NY Knicks- Anytime you have to go into the Garden, it’s tough.  C’mon Knicks, don’t make me sounds like an ass.
Atlanta @ Milwaukee- Playing back-to-back games on the road is tough, and beating Toronto wasn’t easy.  Hopefully the Bucks can take advantage. 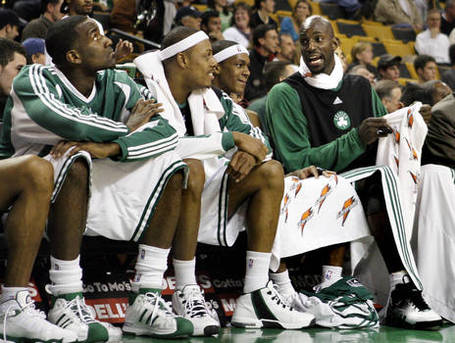 It’s off to the city of chowder.  Miami going for 3 straight on the road.