Share All sharing options for: MV3 returns...Game 7 comin' up 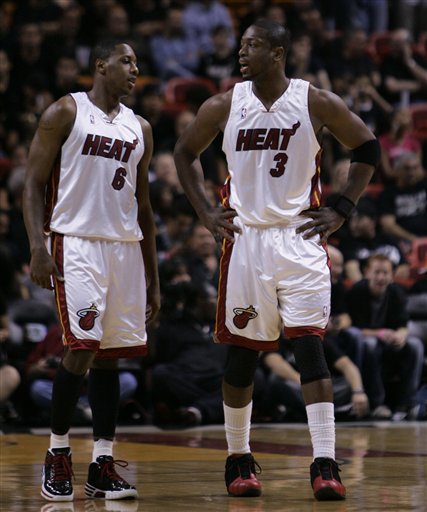 The start to tonight's game came with a shocking story...Jermaine O'Neal would not be playing due to a concussion sustained during the 4th quarter of Game 5 in Atlanta. All that did was provide Joel Anthony the opportunity to show off his blocking skills to a national audience. Another domination game, this one swinging in the Heat's favor. Finally...FINALLY we saw the MV3. The aggressive, shot-drilling D-Wade was back, and not a moment too soon. Being pushed to the brink of elimination not only woke up Dwyane, but it prompted him to wake-up some of his younger teammates, and that worked too. Yes, Dwyane Wade will get most of the attention after this game, and it's well deserved.

It was another good start for the Heat, but this time it wouldn't just be brief. Their first basket came from an unlikely source, Joel Anthony, on an offensive rebound. Then James Jones was yet again fouled taking a three, and while he didn't hit the shot, made all 3 free-throws. The foul was on Joe Johnson; then on the Hawks next offensive possession, Johnson committed an offensive foul and he had to be sat down just 1:52 into the game. Then the Hawks would hit back-to-back treys and boom, they were back up, and the game was off and running. James Jones would answer with a 3 of his own and he had 6 early points.

A moment that changed the pace of the opening quarter, and ultimately the game, was when Udonis Haslem was called for his 2nd foul on a questionable offensive pick. Here came Michael Beasley just 4:27 into the game...and he quickly hit his first two jumpers, looking like the Beasley we all know and love. That was part of a 14-2 Miami run which put the Heat up 24-12. A telling stat with the quarter winding down, the Heat was 9-for-9 at the line (6 belonging to D-Wade) and the Hawks had not yet taken a free throw. The 1st quarter ended with Miami outscoring the Hawks 32-18, led by the amazing Mr. Wade who had 14 points (on 4-of-8). The team shot 55.6% in the quarter and held Atlanta to just 36.8%. It was indeed a great start...but could the Heat keep it going?

The 2nd quarter beginning was a bit of a continuation of the 1st, with the Hawks missing their first two J's and Daequan Cook drilling his first trey in what seems like forever. Cook was also playing some amazing defense on Joe Johnson, then hit another jumper and something was brewing...talk about vintage Cook! Unfortunately he was soon whistled for his 3rd foul and had to be sit down, but he left with the Heat up 37-22. Later in the quarter the Heat went cold, missing 8-of-9 shots while the Hawks went on a 10-2 run, closing the gap to 8. Miami responded with some solid D and scored 6 straight, but the game was starting to even out. The Heat still had their lead, and as long as they could maintain their defensive intensity, this game was in their hands. Unfortunately the half ended on a sour note, with the Heat making yet another inbounding mistake. After a pair of Mike Bibby free throws cut the Heat lead to 11, James Jones tried passing the ball from right under the basket and it was tipped by Bibby who quickly scored, and the Hawks had something to be excited about, going into the break down only 9.

The Heat came out playing hard in the 3rd quarter, scoring 4 quick points and causing Atlanta to burn a timeout just 87 seconds in. It wouldn't help...the Heat kept scoring and the Hawks kept laying bricks, missing their first 6 shots. D-Wade hit a three, his first of the game, to give the Heat a 20-point lead half way through the quarter. He followed it up with another 3 on the next possession and the Heat were off to a 16-2 start in the 2nd half. The Hawks tried going on a little 7-2 to get back into it, but the Heat weren't playing the type of game where they could be out-done. Finally, the Heat rookies were stepping up, scoring the final 6 points of the quarter. Miami outscored Atlanta 27-14 in the 3rd quarter and took a commanding 22-point lead into the 4th.

The 4th quarter started with the Heat going on their own little 7-2 run, and then Josh Smith appeared to lose it. After fouling Jamaal Magloire he challenged the Big Cat, saying "Come on...come on, man" asking for a fight. Magloire laughed and walked away, but come on! What is wrong with that boy? That's right...boy, cause he sure isn't a man, that much has been obvious to a national audience for 6 games now. He would get called for another foul on the Heat's next offensive possession, then T-ed up for whining about it.

D-Wade made his "Not in my house" play when he came from behind and rejected Ronald Murray's layup. It was definitely a signature Dwyane Wade kinda play, but hey...why not another one? Wade would then posterize Zaza with a 1-handed slamma jamma, and-1 of course, and the Heat was up 26. Not done yet...NEXT possession, Wade drives, is fouled, hits the runner and goes over 40 points. Heat by 29. Mario Chalmers then tied a Heat playoff record with his 5th steal. From there the game coasted to a halt, with the Heat riding high going into their first Game 7 since the ‘05 East Finals, where the road team (Detroit) got the better of the home team. Something positive to take out of it...(hey, I'm tryin')

The Heat moved to 5-0 when D-Wade scored 40 or more points. Will having this Wade back mean more then homecourt advantage? If this D-Wade shows up...he didn't get sopped on the road in the NBA Finals, so hard to think he'd get stopped in Atlanta.

Josh Smith tonight...he was who we thought he was. Soft, whiny, immature. Lucky for him, his non-basketball antics take much of the attention away from his 3-of-13 shooting, 7 point game. Keep chucking up those jumpers buddy.

The Heat shot over 50% from the field most of the game, finishing just under at 47.3%. They held Atlanta to under 40% the entire game. They finished shooting 37%.

The Heat coaching staff had their players more then prepared coming out of the locker room. Miami outscored the Hawks 59-32 in the 1st and 3rd quarters.

Can't say enough about the stepping up of Mario Chalmers and Michael Beasley. Beasley breaking a rookie record for most rebounds in a playoff game with 15, and Chalmers tying a Heat record with his 5 steals. Beasley was great offensively, finding a way to score despite his jumpers still not going down easy, and Chalmers was all over the floor, doing whatever was needed.

Also have to talk about Daequan Cook's defense. In limited minutes he was solid playing D on mostly Joe Johnson. James Jones was also great on D, and Joel Anthony was a beast for Miami. 6 points, 8 boards and 3 blocks for the Canadian, and he was very active on defense.

Udonis Haslem was limited to only 11 minutes due to foul trouble, but he'll be nice and rested, ready to shut down Josh Smith, Al Horford, or whoever he gets stuck with on D. The good thing about his foul trouble, it allowed Beasley to find his groove. Now it's got to carry over into Game 7.