Share All sharing options for: Just another off-season Monday 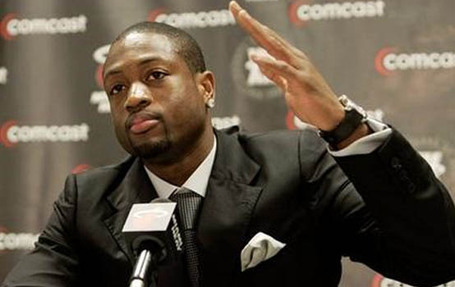 All the talk is still the same.  Is Dwyane Wade going to re-sign?  Will Michael Beasley handle the conversion to small forward?  What about Daequan Cook…is he going to get back to his pre-All Star Game form where he was hitting 4 treys every game (sure seemed that way).  There are so many question marks surrounding the Heat…which means they have graduated from their 1-year of being terrible and are back in the mix of potential contenders.  I know they have a ways to go, but the bottom line is that they have some solid pieces in place, but they have to play up to their potential.

I think that Daequan Cook could be a big key.  The biggest thing escaping the Heat during their attempted playoff run was a consistent outside shooter.  One night it was James Jones, then Dae-Dae had a good shooting night…but it can’t be like that on a contending team.   You look at the top-teams in our conference and they all have that everyday shooting threat.  Orlando- Rashard Lewis and even Hedo Turkoglu has put in some big shots.  Cleveland- Mo Williams, that LeBron dude, and they also have this guy on the bench named Daniel Gibson who can be deadly from beyond, similar to Daequan.  Boston has Ray Allen, Paul Pierce….need I go on?  Put any of those guys, or similarly accurate shooters on the Heat roster along side D-Wade and we’ve got something.  As of now the Heat’s best options for that outside shooting threat is Cook and James Jones.  I’m sure that D-Wade will continue to work on his jumper and his game arsenal will grow, but he absolutely needs a wingman.

Moving on…I was reading Ira Winderman’s blog earlier today and he had posted some interesting Heat Draft tidbits after watching Glen Davis’ game-winner last night in Orlando.  See, the Heat (and 14 other teams) passed on Davis in the 07 Draft, so Ira dug up some other mis-fires from recent Heat drafts.

This year the Heat has no 1st round picks, but have two in the 2nd round (numbers 42 and 60).  They also have Pat Riley in the GM chair since the exit of Randy Pfund, so expect those ‘Riley-esque’ players to be coming in.  There will also be an emphasis on bringing in guys that can possibly contribute right away, giving the Heat roster players who are cheap and wont hurt the team’s 2010 plans.

Getting back to D-Wade for a second, one of the main arguments I hear is whether getting more money (if he says with the Heat) is more important competing for a championship.  I missed the part where the Heat weren’t amazingly wide open about their plans to bring in whatever it takes to win.  They have even gone as far to say that despite saying for months how their plan is to be as good as possible while waiting for the 2010 free-agent class, the Heat is now willing to make a move now, this summer, if given the right opportunity.  So openly contradicting themselves for the sole purpose of letting everyone (especially Dwyane Wade) know they will do whatever it takes to win…seems smart and desperate at the same time.   The knee-jerk reaction of a franchise when their superstar gets pissed after losing a Game 7 in the playoffs.

Jermaine O’Neal was solid at center for Miami, and intends to get better in the off-season.  He kinda became the goat down here…which I thought was very undeserved.  We knew coming in that he was banged up, but the expectations were still quite large.  Then when the Heat lost in the playoffs, his name would constantly come up during the blame game.  Why?  It isn't his fault that the Heat acquired the hobbled center, and all he did was bust his ass trying to keep up with MVP candidate Dwyane Wade.  I've got no ill feelings towards him; I've actually grown fond of the big guy.

Jermaine has mapped out a very long summer for himself, intending to come back to the Heat in the All-Star form many fans expected when we first acquired him.  Here is what his off-season workout schedule looks like, starting this past week:

O'Neal's summer of rediscovery will go something like this: three weeks off, two weeks working out in Miami, four or five weeks with acclaimed trainer Tim Grover, who helped Wade rebuild himself last offseason, and a trip to Joe Abunassar's Impact Academy in Las Vegas.

In the same article, O’Neal says that for the first time in three years, he is able to walk up stairs without any problem.  He wants to feel less like 40 and more like 30…I can understand that.  I’ll be paying as close attention as possible to reports about his progress in these summer training camps, and I hope they aren’t over-positive accounts.  Still, we can hope that they work out for Jermaine and he comes back ready to play 70+ games.