Udonis on the move? Maybe.

Share All sharing options for: Udonis on the move?  Maybe. 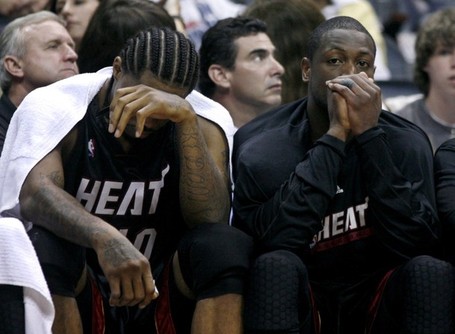 Going to touch on a few things today.  We’ll start with Udonis Haslem, who I feel could still be the focus of a lot of trade talk.  Starting right now, all the way until he is traded, re-signed or signs with another team, he will be under the microscope of many teams, not only the Heat.  He is definitely a high-level starting power forward, probably considered just under the ‘elite’ level of the Dirk Nowitzki’s and Tim Duncan’s.  He’s a more ‘solid’ 4, but still better then half the league.

Udonis is going to make $7.1 million this season, after which his contract will expire.  A relatively low price for someone who a an un-restricted free-agent after the season will be a very appealing target for many teams, and Pat Riley will be getting lots of phone calls regarding Udonis, that is a certain thing.  Then you also have to remember that Riley is always looking to make moves to improve this team, which is something his players (including Udonis) like most about him.  But, that raises the question ‘How secure does Udonis feel?’, and if it will effect his play.  Most players find that deep inspiration to play as well as possible in the final year of an expiring contract, so that will likely be the case here as well.

You also have to take into account the impact that Udonis, as a team captain, has and will have on our youngsters.  There were several times throughout the season that Udonis brought out the best in the Heat’s rookies by getting in their ear, and its well known that his heart and soul lies in Miami.   At some point, the Heat is going to have to cut ties with Udonis.  That is just life in the NBA now; its very tough to keep one player on one team for long.  Now that the Heat have Michael Beasley (and the prospect of getting Chris Bosh is always there), there is only the sentiment to hang on to with U-D…but how long will that thread hold?

Now that the Cavaliers sweep of the Hawks is complete, the Heat have that nauseating closure knowing how far the team that beat them got to.  It hurts knowing that the Hawks final win of their season game in a Game 7 against the Heat.  And I could be mistaken, but did anybody hear anything about this series at any time?  Any brawls?  Josh Smith do ANYTHING worth hearing about?  No?

The Heat can now start focusing on the same thing the Hawks were after this past season: home court advantage in the playoffs.  Does anybody doubt that if Game 7 of the Hawks series was played in Miami that the Heat wouldn’t have won?

It also has to be considered that even at their current state, the Heat is not very far away.  They have a lot of youth that is still in the maturation process.  I think Daequan is going to have a big year, his 3rd in the NBA and 4th since high school.  Spending the summer figuring out how to get his masterful stroke to be consistent will give him a lot of tools to fall back on when struggling during the season.

NO 2ND SURGERY FOR JAMES JONES

The same bigger year should be coming from James Jones, who will not be needing a follow-up surgery on a tendon in his right wrist.  Jones had been thinking that a 2nd procedure would be necessary to enhance his range of motion, but the Heat trainers say its just going to take more rehab and strength building to get this wrist back to normal.

That being the case…a better, stronger version of Jones, similar to the guy we saw during the Playoffs, will be a welcome threat from the outside, something that the Heat will need badly to compliment Dwyane Wade.  Just imagine for a second…at their best, Daequan and Jones…in between D-Wade and Beasley.  Add a refreshed, stronger Jermaine O’Neal at center and you have the beginning of the high expectations we could see surrounding our Heat this coming season.

Dwyane Wade was one of three players selected from the Eastern Conference to the All-NBA first-team, along with LeBron James and Dwight Howard.  From the Western Conference came Dirk Nowitzki and Kobe Bryant.  Its no surprise that the All-Star candidate and NBA’s leading scorer was on the team, but it is a surprise that its D-Wade’s first selection.  It surely wont be his last, and you have to think that Wade will be one of the MVP favorites going into next season.  For reasons listed above (about supporting cast), Wade has an even better shot at taking the MVP trophy, and as we saw this year…even if his numbers dip a little, as long as the Heat is winning, he’ll win the vote.

The Heat are denying rumors that they are going after Greek National center Yainis Bouroussis, but I’m taking that with a grain of salt.  Miami only has Jermaine O’Neal and Mark Blount signed at center next year, with Joel Anthony an RFA and Jamaal Magloire a UFA.  Bouroussis is young (25) and is a former all-euroleague first-teamer.  He is big for 6’11”, and uses his wider frame to draw a lot of fouls in the paint.  His free throw and outside shooting are both solid, as are his abilities to rebound on both sides of the floor, an attribution to his great hands.  We’ll see if this story dies out…but I wouldn’t be surprised if we hear Yanis’ name again in the future.