6 Years of Heat draft picks: Where are they now?

Share All sharing options for: 6 Years of Heat draft picks: Where are they now? 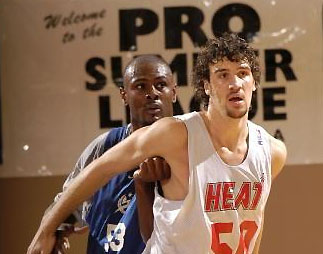 With the Heat beginning their pre-draft workouts, some of the attention is shifting to what the team will be doing with their picks.  Right now they only hold picks 43 and 60, so the question will be if Pat Riley wants to trade up.  The basketball mastermind was able to scoop up Mario Chalmers pretty late last summer, but for the most part has been somewhat off in recent years.

While we can bask in the glory of having almost as good of a draft in 2008 as the Miami Dolphins (different sport...I know.  But both GREAT drafts), I thought we could take a look back at some of the choices made by Pat Riley and Randy Pfund.  There have certainly been some questionable moves, and obviously most of our picks have not really ‘worked out’…but does it really matter what you sandwich in-between Dwyane Wade and Beasley/Chalmers?  Ok, so starting with the pick that came right after D-Wade, here is a little ‘where are they now’ of the last 6 years worth of Heat drafts.

Played 2 whole games in a Heat uniform in 2003 before being cut loose.  He since has played in the CBA and NBA-DL before buying out his own contract to pursue a career overseas.  06-07 saw him playing in Australia for the Sidney Kings, but then was released following the Kings exit from the post-season.  The following year he played Ironi Ramat Gan in Israel, then last season he moved to the Netherlands and got on a team called the EiffelTowers Den Bosch, but was released in January after testing positive for THC.  Gee...he moves to the Netherlands and tests positive for pot...shocking.

We are all well aware of Dorell's inconsistent career, especially the past couple years when dealing w/ injury.  He worked extremely hard on his ball handling and shooting during the 07-08 ‘15-win' season before his year ended with a meniscal tear of his left knee.  He then missed the majority of the 08-09 season, but came back to play in 6 games towards the end.  He has played in 139 regular season games for the Heat and started 55, averaging 5.9 points on 46% shooting, 3.9 rebounds and 1.2 assists.  There are still ‘high' hopes for Wright looking ahead, but after 5+ years I'm taking those hopes with a rather large grain of salt.

Never played a game for the Heat.  His rights were traded to Boston in the Antoine Walker trade.  Played professionally in Italy from 2002-2005 and is now playing in Spain for the team Pamesa.

The Heat released Freije before the start of the 04-05 season, and he picked up with the New Orleans Hornets where he played in 23 games, starting 11 (averaging 4.0pts and 2.7reb).   He signed with Atlanta prior to the 06-07 season, averaging 2.1ppg in 19 games, but was waived in December of 06.    He then had a great summer league for the Milwaukee Bucks, but was never signed on to join the team for the 07-08 season.  He is now playing in Puerto Rico in the Baloncesto Superior Nacional for Criollos de Caguas.

Wayne started out his Heat career relatively well, riding the bench most of his rookie year (05-06).  He appeared in 43 games (2 starts) playing 9.6 min/game, averaging 3.4 points and 2.1 boards, and he was a part of our 2006 NBA Championship team.  The following summer saw Simeon come down with a salmonella infection which held him out of the Summer League and seriously hampered his off-season workout plan.   He would only make it into 8 games that season, and was traded just prior to the 07-08 campaign.

Simien, along with Antoine Walker and Michael Doleac, was traded to Minnesota for Ricky Davis and Mark Blount, but Wayne was then waived by the Timberwolves to keep their roster at 15.  He was given an invitation to play with Cleveland in last years Summer League but couldn't play due to a hamstring injury.  Later that summer, he received an invitation to the Atlanta Hawks training camp, but the invitation was withdrawn before he could arrive.  He joined up with Spain's Cáceres CB in October 08, but decided to retire from Professional Basketball on May 5th to pursue working in a religious ministry.

2007: Round 1 Pick 21- G Daequan Cook (acquired via trade along with cash considerations from Philadelphia for 20th overall pick Jason Smith)

Daequan had a solid rookie year during our dismal 15-win 07-08 season, but really broke out over the first 4 months of this past season.  His supreme efforts culminated in his victory in the 2008 All-Star 3-point shooting competition.  He still has to get his shot to being consistent, but Daequan should end up a solid ‘Eddie House' kinda shooter, but providing much better defense.

And in case you were wondering, Jason Smith played in his first NBA games this past season, making it into 76 games for the Sixers, averaging 4.5 points and 3.0 boards in 14.6 minutes/game.  He missed all of last season after tearing the ACL in his left knee during a Sixers camp in Las Vegas.

Traded from Miami to Indiana before ever playing or even practicing for the Heat, Stanko wouldn't ever make it into the NBA.  He signed a multi-year deal with Spanish ACB team TAU Cerámica in August 2007, then was loaned to Pamesa Valencia in October '07 for the rest of that season.  This past year he played in 23 games in the ACB, averaging 2.8 points and 3.1 boards in 12 min/game, shooting a lovely 39.1% from the field.

Traded the day he was drafted to Cleveland for their 2nd round pick in 2009, which will end up being the final pick in the draft (60th).  He played in 51 games for the Cavs this season, averaging 1.9 points and 1.7 rebounds in 8.4 min/game.

There you have it Heat fans...you are now well polished on the happenings of every Heat draft pick since Mr. Dwyane Wade.  I'm sure you noticed I left Michael Beasley and Mario Chalmers off the list...for obvious reasons.  If you need me to tell you what they have been up to since being drafted by Miami...you haven't been paying much attention to the NBA this season.

So what do you think?  Do Dwyane Wade, Daequan Cook, Beasley and Chalmers make up for the many picks that either never played for the Heat or in the NBA?

The 2009 NBA Draft is 40 days away, and hopefully the rest of the Playoffs will provide as much entertainment as the first 2 rounds.