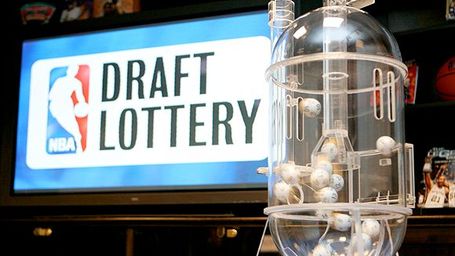 Here are the results of last nights NBA Draft Lottery.  Another year of the NBA’s worst team NOT getting the 1st overall pick, but that’s part of the beauty of the lottery.  I’m sure if you asked any random group of NBA GM’s, they would be in favor of the lottery instead of the draft order being determined by the final standings.

For the full NBA 2009 Draft Board, click here.  For the pre-lottery odds of each team, click here.

The Heat would have had the 18th overall pick, but that was traded to Minnesota along with Antoine Walker, Wayne Simien, Michael Doleac and cash for Ricky Davis and Mark Blount just prior to the beginning of last season.  Ouch...but it was still worth it to get rid of 'Twan's huge contract.

The Heat do have two picks in the 2nd round.  The 43rd overall pick was traded to Miami in 2007 by Indiana for Stanko Barac, who the Heat selected with the 39th overall pick that summer.

The 60th overall (and final) pick of the draft was acquired by Miami last summer when they traded '08 Draft pick Darnell Jackson (52nd overall) to Cleveland.

Miami would’ve had the 47th overall pick (a pick they originally acquired in the trade for Daequan Cook in the 2007 Draft), but they shipped it to Minnesota along with cash for Mario Chalmers during last years Draft.  That one I'll take all day, everyday.

Just got done watching the Lakers-Nuggets Game 1.  That should be a SICK series.  Not sure what to expect from the Cavs-Magic series, but i doubt it compares to the battle out West.