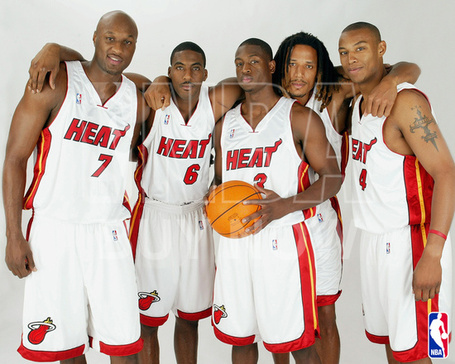 Wow, can you imagine?  If only this could REALLY happen.  Oh, wait...

Staying with the Draft lottery for a minute, I wanted to address how even though the Heat were not involved, there was still something good to take out of the final draft order.  The Wizards, who were tied with the Clippers for 2nd worst record in the league at 19-63, fell the maximum of 3 draft spots in the lottery, dropping to the 5th overall pick in a very weak draft.

This is good for the Heat for the obvious reason; the Wizards will most likely not be able to insert their lottery pick right into the lineup, which is good considering how banged up the Wiz were this past season.  They still have Caron Butler, Antawn Jamison, Brendan Haywood and some guy named Gilbert…all of whom were out with injuries for significant time this season. So the non-addition of a Beasley-like lottery pick is a very good thing, as its likely the Wizards are much more competitive next season with all their stars healthy.

With the Clippers getting the 1st overall pick and their coach Mike Dunleavy coming right out and saying that they are going to take Blake Griffin, that leaves the Clips with a plethora of ‘bigs’.  Remember how the Heat almost drafted Chris Kaman in 2003 ahead of D-Wade?  Well now the opportunity could be there for the Heat to have both, is Los Angeles is looking to dump some long-term salary.

Of course, bringing in Kaman (say in a trade for the expiring contracts of Jermaine O’Neal or Mark Blount) would certainly put a damper on the 2010 plans.  Kaman makes over $10 million a year for the next 3 seasons, so they would have to endure that cap hit.  Would this be the kind of move the Heat would want to pull the trigger on, or should they stand pat and wait for next summer?  There really is a lot to consider because we are now entering the time where Miami has to decide what direction they want to take their franchise.

Oh, and just a personal note….I am VERY excited to see what Ricky Rubio can do in the NBA.  He impressed the crap out of me during the Olympics last year and I’ve been dying to see what he does with even better players around him.

Speaking of the Olympics, head of USA Basketball Jerry Colangelo is starting to look around with the intentions of fielding his next teams for the 2010 World Championships and the 2012 Summer Olympics in London.  Should Dwyane Wade choose to play along, he would be committing to playing basketball basically year-round for the next 2+ years.  No summer break coming for D-Wade should he want to continue his international basketball career, so it’s something big for our superstar to consider:

"I haven't given any thought," Wade slyly insisted. "I have so many other things to think about, and when 2010 comes and it's time for me to think about it, then I will. Then you've got to sit down and think about: What is it that you're coming together for and this and that. Right now, that's not my main focus."

Now, should his buddies LeBron James, Carmelo Anthony and co. tag along, Wade’s choice could be a lot easier for him to make.  When asked if those guys playing would impact his decision to play:

"Of course it will," Wade said. "A lot of us, especially myself, LeBron, Carmelo, Chris Paul, guys that have been involved with it for a couple of years, and you've grown this relationship with them both on and off the court, it makes you want to be a part. But, at the same time, you see what they do. We'll talk about it. We all will talk about it when the time is right."

Alonzo Mourning is starting to gear up his 13th annual Summer Groove, and this year the venue has changed a bit.  The game itself will still be at the AAA, but the comedy show, youth summit, dinner and other things will at the Seminole Hard Rock & Casino in Hollywood, FL.

This is a very good thing for the Groove, as the bigger and ‘snazzier’ venue should attract more talent and sponsors, and it also shows that even more then a decade later, the summer event is still going strong.  Also having something to do with it could be his returning co-host, Dwyane Wade.  For the 2nd straight year, D-Wade will be right there along side Zo, carrying on his amazingly great traditions of getting involved with the community of South Florida and being the great, charismatic, loveable guy that we all know and, well….love.

The new ‘official’ name is The Summer Groove hosted by Zo and D-Wade.  Not only is it great that Zo is still doing A LOT to make a difference in young peoples lives after his playing career is over, its equally awesome that D-Wade is getting more and more involved and starting to follow in Zo’s footsteps.  This is one of Alonzo’s favorite times, as he looks forward to his summer show every year.

“This time of year excites me more than any rebound or blocked shot or anything I’ve done on the court,” Mourning said.

Finally…I’m sure you herd earlier this week that former Heat player Brian Grant has been diagnosed with Parkinson’s disease.  One of the hardest working players to ever put on a Heat jersey (right up there with Zo), Grant will always be one of my favorite players.  Something about big guys who, despite having the size to merit playing time, work their asses off day after day will always earn my respect and catch my eye.

I’ll most remember Brian from the 03-04 season.  I was living in Jersey that year and went to the Heat’s season opener in Philly.  Two things stood our for me that night:  This quick, flashy rookie with a funny name and the multi-colored dreads of Brian Grant.  He was good for a  double double almost every night and really brought his game to another level when the Heat made the playoffs.  He was a beast during the 1st round series against the Hornets, and you could see the pain in his face when Miami fell to the Pacers in Round 2.

Our collective thoughts and prayers will be with Brian and his family.  #44 will always have a home in Miami.