Share All sharing options for: A little ranting and Ira's Top 50 Heat players 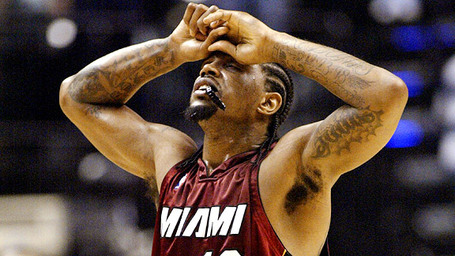 I feel your pain Udonis...

Well here we are, up to our knees in off-season.  There is so little Heat news to report on that its gotten annoying, and the only things that I see/hear/read about are related to the remaining playoff teams and their series’.  Now I know that the NBA’s final four has rejuvenated the playoffs (somewhat), but at the same time I miss having my teams to root for.

But now it’s all the same stuff…what is Wade going to do in 2010?  Will the Heat trade up in the draft?  How will Michael Beasley handle moving to the 3?  I’m sorry, but I have already given my opinion, it isn’t going to change, and I find it silly to re-visit the same topics when there is nothing new or insightful to add to the original story.

So I find myself searching around my usual Heat-news sources to see what my fellow journalists are coming up with…and what do I see?  Mostly Orlando Magic, LeBron and Kobe…

I know that I’ve touched on some of the things that are going on around the NBA, which I will do occasionally when interesting things are going down…but I’m not going to dedicate a whole article on the Cavs or Nuggets or whoever.  Actually, I’d love to hear some of your ideas for potential subjects to write about over the summer, so if you have any please shoot me an e-mail or leave it in the comments.

One cool thing I came across was thanks to possibly the best Heat writer out there, Ira Winderman.  In his blog, he recently posted the ‘Top 50 Miami Heat Players (of all-time)”.  I’ll be honest, I’ve only been into basketball since the mid-90’s (I was born in ‘83 to give you an idea of where I was at)…and while I’ve watched my share of old footage and done plenty of research while working for the Heat…I feel my Top-50 would end up leaving out some of our lesser known but nevertheless superb Heat players that I may have missed, left off, not thought of, etc.

So here is Ira’s Top 50, but you’ll notice that Beasley, Mario Chalmers and Daequan are all off the list, for obvious reasons.

The first name that popped into my head that wasn’t on the list was Michael Doleac.  He was only with us for three seasons, but was one of our most reliable bench players, and I thought he did a great job as a back-up center.  His playing time was cut during his first season with the Heat when Zo came back, but come on…Malik Allen is ahead of Doleac?   Or Damon Jones, who had one good year with the Heat?  If those guys are there…why not put Clarence Weatherspoon up there?

Alright I’ll save more topics for the next entry…which will be up either tomorrow or Saturday.  But like I said…if you have an idea, send it on in.  I love our little community we have going and the more I can get you guys involved, the better.