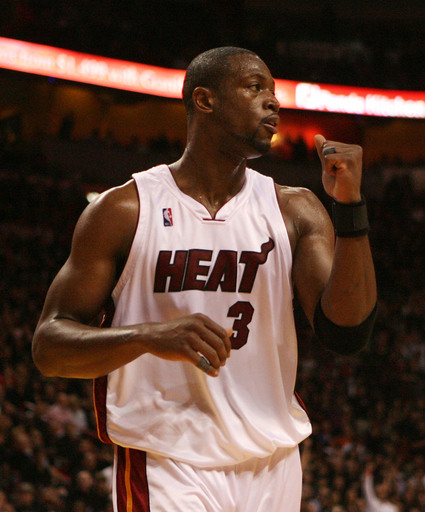 I don't even know what to write right now.   It seems to me that we've all been watching this series under a microscope, so there isn't really anything I can say that new, or ‘news' to anyone.  Well, I'll take that back...Jermaine O'Neal and his probable absence is news.  But considering that the Hawks center Al Horford's status is also uncertain, and after the way Joel Anthony played in Game 6...it's not ‘earth shattering' news.

This game...this HUGE Game 7...I'm really not too worried anymore.  He came back...Dwyane Wade came back in Game 6.  No more injured back, no worries about the bruise on the back of his head...he was slashing, swishing...he was Flash.  If that guy is showing up and wearing a black Heat uniform, Atlanta has no shot.

After his Game 6 performance, the Hawks are likely to zero in on D-Wade like they did in Game 4.   But this time, we have Michael Beasley not missing layups and starting to hit some jumpers.  We also have the renewed confidence of ‘Super Mario' Chalmers, who must have been chomping on one of those Super Mario Bros magic mushrooms because his game reached new playoff heights. After being reminded that he was a Final Four MVP by Wade, Chalmers is feeling the confidence that was lacking the past couple weeks.  Did anyone notice how he shut down Mike Bibby during the 2nd half of Game 6?

D-Wade, Udonis Haslem, James Jones and Jamaal Magloire are the playoff veterans on the Heat, but from there we have a significant drop in playoff experience on our roster.  A drop to zero, actually.  For some reason, I have a feeling in my gut that Daequan Cook is going to step up and drill a few 3's today.  Call me crazy, but I also think Beasley is good for another double double...20-10 maybe.  This isn't just me being a homer...but with all our cylinders firing, I can't see the Hawks having much of a shot.  If Beas, Cook, Jones...these guys have off-nights, then we're cooked.  Wade will need some help, even if he scores 40.

The Heat will need to get off to a quick start, both to calm down the Phillips Arena crowd and to keep up with the series streak.  Each game so far, whoever has been winning after the 1st quarter has gone on to win the game.

Just be prepared for D-Wade not to get many calls.  Atlanta has the feel of an ‘old-time' homefield advantage, meaning while it likely isn't happening...you still feel like there is some ‘behind the scenes' stuff going on to help the home team.  That's not a knock on Phillips Arena, I think its kinda cool to still have that kind of 'feel' at a home arena during this 'day & age' when so much effort is put fourth to make sure those kind of things don't happen anymore.

Please keep Josh Smith out of the paint.  It's the only place he can do damage, and if he gets going at home...that crowd fuel's off of his foolishness.  This is the same crowd that boo-ed D-Wade, and their comebacks that I've been reading:  "Did you see the empty seats at the beginning and end of Game 6?"  Sorry guys, we have a late arriving crowd, and since your team decided not to show up, nobody wanted to stay and watch the end of a 30-point blowout.  I won't be upset if we don't play the Hawks in a playoff series for a long time...I never realized how whiny and ill-informed their fans were.

I know one player who will be hungry out there is Udonis Haslem.  After getting just 11 minutes on the floor in Game 6, he should be a 1-man glass cleaner tomorrow in the 1st quarter.

Jermaine O'Neal met with doctors Saturday afternoon after the team flew to Atlanta, and didn't seem too optimistic about playing today.

"I found out the severity by talking to the doctors this morning," he said Saturday, with a look of genuine concern for his own health.

With O'Neal likely out, odds are Michael Beasley and Udonis will get a fair amount of time on the floor together.  This will work for the Heat, especially if they can keep getting the Hawks in foul trouble early.  That's why Wade and Beasley driving the ball is a very good thing.

Just a reminder, this is the first time in franchise history the Heat will play a Game 7 on the road.  It's also the first Game 7 for the Hawks franchise since the 60's, when they played in St. Louis.

The Heat left Miami packed for Atlanta and Cleveland, expecting to fly there tonight after the game.  Being cocky...or just being good-n-prepared?

For me, barring some very special circumstances I'll be in DVR-mode for the game.   It sucks...I know.  I'll get a (hopefully) celebratory post-game up as soon as I can, but tomorrow is a crazy day.  Why couldn't the game be at night like every other friggin' game this series???