Blowout #7 leaves Heat on the short end...but it was still better then 15 wins.

Share All sharing options for: Blowout #7 leaves Heat on the short end...but it was still better then 15 wins. 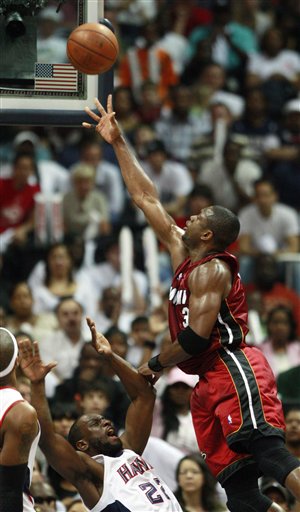 Finally, I was home.  Time to watch Game 7.   It began nicely, with a missed Joe Johnson jumper on D, then a great pass from Chalmers to Haslem for a quick 2-0 lead.  I wasn’t thrilled to see Joel Anthony putting up a shot on our 2nd offensive possession when D-Wade didn’t have a touch yet, but it was early…and I was anxious.  It was something when Wade did get his hands on the ball and was greeted by ‘Boo-ing’ from he Hawks crowd.  I couldn’t ever remember him being boo-ed from any away crowd.

The Heat got off to a quick start, going up 8-2 on some solid D and D-Wade getting off to a quick start.  Chalmers was looking good running the point and dishing the ball nicely.  One bad thing was Josh Smith having 4 early points in the paint…Udonis Haslem doesn’t usually get backed into the lane.  So yeah..so much for that 8-2 lead, as the Heat couldn’t hit any jumpers and the Hawks went on their own little run, thanks mostly to Mike Bibby, and they were quickly up by 4.

Miami responded with a big lineup half way into the 1st, going with Joel Anthony, Udonis Haslem and Michael Beasley.  On their first offensive possession, Anthony and Haslem each grabbed offensive boards (it was U-D’s 6th rebound of the quarter) leading to the Heat tying the game at 14.  D-Wade gave Miami the lead again when he scored an 8-0 run.  He had 10 of the Heat’s 16 points.

Meanwhile, the Hawks were in the midst of missing 7 straight jumpers, and with just over a minute left in the 1st, Jermaine O’Neal checked in.  With Haslem missing J’s and Beasley looking passive, it was nice to be able to go to Jermaine.  Unfortunately, he fouled Josh Smith, then chucked up an airball on offense, then fouled Zaza on the other end of the floor.  He didn’t even last 45 seconds in the game, and a 4-point Heat lead was lost.  One ‘brain-fart’ by Miami was their final offensive possession.  They were taking the ball out on the side with 7 seconds left and Atlanta had just brought in Mario West.  Now you KNOW he is going to covering Wade tight as hell, but the Heat had no help for Wade, who tuned the ball over and caused free throws going the other way.  Hawks by 2 after 1, when the Heat had the ball and the game tied with the shot clock off.

When the Heat started the 2nd quarter without Wade on the floor, the Hawks started swarming the ball and the Heat replied by turning the ball over.  A guy would pick up the dribble and nobody was moving.  Somebody has to give him an outlet…more then one somebody actually.  Atlanta was doing a good job of throwing different kinds of D at the Heat.  It didn’t take long for Wade to get back in the game, and he was right back to work, diving and getting to the foul line.  Unfortunately, the Hawks would suddenly gain some momentum when Zaza came away with an offensive board on the floor, and dished it to Ronald Murray for a wide-open trey.  Wade tried to respond with a three of his own, but missed.  Joe Johnson liked D-Wade’s idea and drilled a quick three, suddenly the Hawks were up 8.

Johnson wasn’t done, hitting a thirty-foot 3…and we had our first double-digit lead.  I looked at the score and was scared, as this was about the time when a team would pull away, at least in this series.  Sure enough, the Heat offense suddenly looked ridiculously slow and stupid, and the Hawks were hitting some jumpers.  Just some though…if they had hit all the open looks we gave them, the lead would’ve been a lot worse then 15.

D-Wade had to get it going in the 3rd quarter…he missed his last 8 shots of the 1st half, some of which were layups.  The Heat as a team were just awful, shooting 33% from the field and turning the ball over 10 times.  How about the big 000-for-7 from beyond the arc.  They started the 2nd half with Beasley joining the starters, who turned the ball over on the Heat’s first offensive possession.  He’d score the next 3 Heat points, and Wade got a layup to fall.  The Heat had cut the Hawks lead to 10, but would have to D up and get some stops.  Wade would quickly respond with a block on Al Horford, but a missed they (number 9) and another Beasley turnover would let Joe Johnson hit a wide-open 3, and boom, back to 13.   Next Heat possession, another Beasley turnover, this time dribbling the ball off his foot.  Hawks ball, no D, down by 15.

When I saw Flip Murray take a wide-open 3 with the Hawks up 14…I wanted to mail it in.  The shot didn’t go down, thankfully.  But it was a clear example of how poor the Heat D was playing.  Then Wade hit his 5th shot of the quarter (on his 6th attempt) which was from 3, the Heat’s first three-pointer on 10 attempts.  Miami had it down to 11 and had the ball, but Wade couldn’t get the ball across half-court in 6 seconds, then was called for a really weak offensive foul.  Whatever the Heat did…they could not get back into this game.  Joe Johnson lifted the crowd with his 5th from beyond, and the Heat were down 16 going into what looked like their final quarter of the season

I’m going to spare you the 4th quarter summary.  I didn’t want to watch it, I don’t want to write about it.

Other then Udonis Haslem…who left it all out on the floor?  I wasn’t even satisfied with the effort from D-Wade, which is NEVER the case.  Where was Daequan?  Who greased up Beasley’s hands before the game?  Ugh.

In a move that pretty much summed up our coaching staff this season…after spending the whole year telling us why Michael Beasley wasn’t a small forward, that was the first move they made today, subbing in Beasley for James Jones.

You could tell Jermaine O’Neal wanted to go…but in the seconds he got into the game, looked rusty and slow.  Don’t worry…I think we’re going to see a really good version of O’Neal at the start to next season.

Did Daequan Cook really play 17 minutes?  Could’ve fooled me…I don’t remember him being on the floor at all.

Ok, enough Heat bashing.  I’ll settle down and get something more positive up here tomorrow.  I’m going to Coldstone to drown my sorrows.  It’s been fun guys…