Share All sharing options for: When Pat Riley speaks...we listen 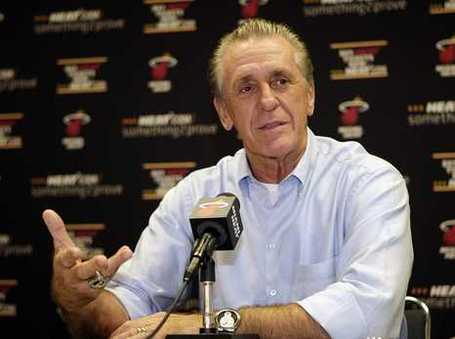 Pat Riley certainly gave us a lot to think about during his presser yesterday.  But considering how much Heat fans and media alike have been scrambling since Miami was ousted by Atlanta in Game 7 last Sunday, somebody had to settle everything down and set some things straight.

We’ll start with Riley’s comments about the teams intentions this off-season, saying that the plan is still to wait until the summer of 2010 before making any big moves…but still leaving the door open for a sooner blockbuster.

"Being patiently impatient is what it's about. If something happens that is good and could change the direction of the franchise immediately, if it was sound, fiscal, fit into all of the parameters, like the Shaquille deal did at the time, you move forward. But with what we did last year, what we brought in this year, and how we were able to clean the table for 2010, that has to be the vision and the long-term plan. But I would be proactive if something were to happen. I've got a huge ego. But it's got nothing to do with anything other than the team. It's really about the team."

The other main point from Riley was about re-signing D-Wade, who becomes a free agent after next season.  They are going to try to get Wade signed up sometime this summer, but its unknown if Wade wants to think about a new contract until his current ones expires.  Said Riley:

"It's been broached. It's on everybody's mind. We want Dwyane Wade here the rest of his career. We would love to get a commitment.  He’s our franchise player, we’ve spent seven years together. We won a world championship with him. We love him to death. The fans love him. He’s irreplaceable…but we also understand he has the right to wait (to re-negotiate)."

Could it be a smart move to go after a new contract now?  Sure…but it could also blow up in their faces.  How demoralizing would it be if Wade showed no interest in considering a new contract right now?  I think to publically say that they are going after a new deal, Pat Riley and co.  are setting themselves (and Heat fans) for a big public letdown.  I think that if they had just gone about meeting with Wade over the summer and ‘testing the waters’ to see if he would consider signing an extension, there wouldn’t be nearly as much attention and possibility for a big slap in the face.

Now don’t get me wrong.  I still feel very confident that Dwyane will stay with the Heat when the time comes to re-sign.  But right now may not be the best time.  We just lost a pretty ugly 7-game series and it isn’t a very happy time in Heat-land.  Wade knows he has options and can basically sign whenever he wants…meaning that if he is really pissed or upset, he can have some wiggle room and ride his emotions a little more.  I know that’s being a bit broad, but I just think you have to consider D-Wade’s feelings and potential reactions before going public with something that you have no real control over.

There was more talk about the team’s decision to move Michael Beasley to forward, and that he is off-limits in trade talks…sort of.  Hey Pat, is Beasley un-touchable in a trade?

“I would think so, in my mind,” Riley said. “But you never know what can come from the outside. Beez and Mario and Daequan are a big part of our future.”

Then talking about the position change, Heat coaches feel confident that Beasley will have a much better work ethic this summer then last.  Now that Beas has an idea of what its like in the NBA, and knows the feeling of losing a Game 7 in the playoffs, it will be easier to have that ‘something to play for’.

“I’m a believer in Michael, and Erik is a believer in Michael. And we think with a real summer of work he’s going to make real strides.  We didn’t have a great summer with Michael last year,” later adding Beasley “never really had a real developmental summer, the kind of thing that helped Dwyane his rookie year.”

Another interesting thing that has come out this week is the Heat’s intention to start Beasley at small forward next season. Gee, and I was thinking that Miami would dangle Udonis Haslem as trade bait in order to get something in return while finding a way to start Beasley.  Nope, apparently not.

"He can play that spot, there's no doubt," Riley said, "I think Michael has the ability to be one of the best three-fours in the game. He will give you tremendous firepower.  There's some power small forwards in this league," he said. "I'm a believer in Michael. I think he can play that position, but he needs to be drilled on a lot of things. He's a great shooter. What I would like him to become is a very versatile player."

One thing that got my attention was that the Heat will not be participating in the NBA’s summer league.  Instead, Beasley, Mario Chalmers, Daequan Cook and Dorell Wright will be going through a summer training session called ‘Heat Academy’.  This will be an intense training camp for the youngsters, run by our coaches, to mature them more then any other summer option.  Obviously, they were unhappy with how the season ended up for the youngsters.

"Michael and Mario and Daequan and Dorell are going to be part of what we call the Heat Academy. We have foregone the summer league this year because I want it to be about a summer of work. Of drilling and out of the box thinking about developing their athleticism and not just their basketball skills. I think they will get more out of it than in the summer league. I'm not saying we won't take them somewhere for a session - I've talked to four or five other teams.”