Share All sharing options for: Jermaine O'Neal and Yakhouba Diawara re-up with Heat 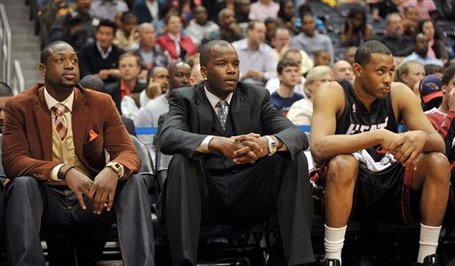 As expected, both Jermaine O'Neal and Yakhouba Diawara have exercised their contract options for next season.  This comes as a reminder that we can rest easy knowing that one of the biggest problems we faced last year is solved for the near future.  Jermaine is a solid center, and hopefully will come back refreshed and sharp after the extensive off-season workout plan he's planned for the summer. He is set to make $23 million next year, and Kooba will be earning $945,000.

Two other players that are expected to exercise options for next season are Chris Quinn ($1.5 mil) and Mark Blount ($8 mil).