Alonzo Mourning: "I think Phil is just showing up"

Share All sharing options for: Alonzo Mourning: "I think Phil is just showing up" 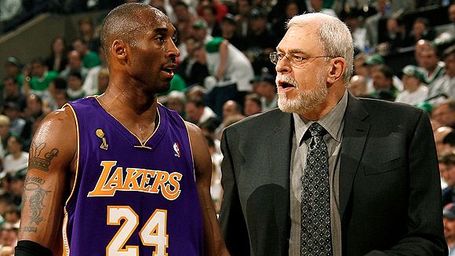 During a conference call promoting a celebrity golf tournament, Alonzo Mourning made some comments about Kobe Bryant's ability to be a floor commander, and how he thinks that Phil Jackson is "just showing up".  It's no surprise a call between Zo and fellow NBA-ers Shane Battier and Wally Szczerbiak led to talk about the NBA Finals, but for Mourning to come out and blast Phil Jackson like this is interesting, to say the least.

"To tell you the truth, Phil doesn't have to do anything but call time outs,'' said Mourning. "Kobe is the facilitator. He is the one driving the mission of this particular team right now.  The communication level he has with his teammates out there, you can just see it.  I think Phil is just showing up, to tell you the truth, and Kobe is doing all the work to make this team successful.''

Perhaps Zo is still a little sore about the Bulls ruining his chances for a title with the championship caliber Heat teams of the late 90's.  But still, is this the time to come out and start talking smack about one of the greatest coaches in NBA history?  I love Alonzo as much as the next guy, so I'll give him the benefit of the doubt and assume there is some reason he is suddenly coming out and blasting Phil.