Michael Beasley is looking to expand his game

Share All sharing options for: Michael Beasley is looking to expand his game 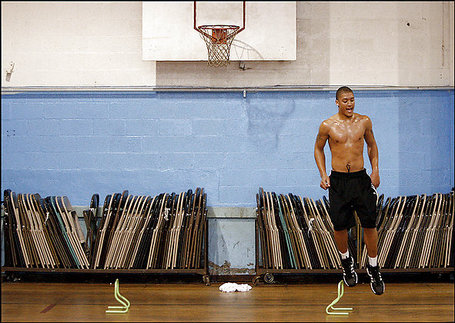 In an interview posted on the Miami Heat website, Michael Beasley made a point of saying that he wanted to work on his ball handling and jump shooting, and would be doing a lot of drills that 1 and 2 guards run through.  He also talked about not being the 'go-to guy' for the first time in a long time, and making the mental adjustments to not being the first option and coming off the bench.

But I have to agree with Ira Winderman, who in his blog said that when Beasley talked about his intentions to work on the 'smaller' aspects of his game, it stood out.  Here is what B-Easy had to say on the subject:

HEAT: Are there any areas of your game you’re working on this summer?

BEASLEY: "I’m working on the things a shooting guard or a small forward would work on. I do a lot of screen work, a lot of jump shots, and ball handling – a lot of stuff point guards do. I know I may never play the one or two, but I feel if I work on those skills, it will be harder to guard me. I do a lot of stuff that Chauncey Billups does. I think he’s the best point guard in the NBA, especially coming off screens. Why not try to emulate that? I feel like if I can add that to my game, I will be a tougher match-up."

It's great to hear that the already explosive Beasley wants to expand his offensive game even more, and I think its safe to say that we can expect an even better Michael Beasley then we saw last year.  The question of 'how much better?' will be one it will be interesting to see answered.

Alonzo joined Florida Gov. Charlie Crist at a Tallahassee dialysis center on Wednesday where a new bill regarding kidney transplants for people under the age of 65 was signed.  The bill was named after Mourning; here is some info about it:

The new law will let patients under 65 with end-stage renal disease obtain Medigap insurance if they already qualify for Medicare.  Medigap will qualify as the second of two coverages needed to get on a waiting list for a kidney.

Just another positive thing that you hear about Zo, who even after his NBA career is over, is still proving to be an excellent person and role model to the youth of Miami.  I think that it's safe to say that Alonzo Mourning is the 'Dan Marino' of the Heat franchise.

Pat Riley wasted little time in responding to a report from New York Daily News linking him to the non-vacant coaching job in Cleveland (last time I checked, Mike Brown is still the coach there).  Riley called the report a "complete fabrication", and went on to say that he is "very happy where he is, and has no plan to go anywhere."

Riley also said that his recent move into a full time front office role has dropped his desire to coach, which is understandable when you are focusing on so many elements that have to do with teams other then Miami.  He also wouldn't rule out an eventual return to the sideline, but for now will be focusing on getting the Heat their 2nd NBA title.

9-year old Marlon Bustos received an awesome surprise when his school was invaded by Dorell Wright, Bernie, the Miami Heat Dancers and the Xtreme Team.  They put on a show for the school during Springview Elementry's end-of-the-year pep rally, and presented Marlon with a team-signed basketball, a Bernie wig and more...

As the performance began, with Burnie the mascot dancing to MC Hammer's U Can't Touch This, the audience of second-, third- and fourth-graders roared in laugher. Marlon just sat wide-eyed with a smile glued to his face.  But a few minutes later, Marlon's smile stretched extra-wide when Heat player Dorell Wright hopped off the stage to take the empty seat next to him. Wright presented him with a customized jersey that read ''Bustos'' with the No. 3 number three below it to represent Marlon's his favorite player, Dwyane Wade.  Wright also gave Marlon a basketball autographed by the team and a wig that matched Burnie the Mascot's neon orange hair.

More great, positive actions coming out of the Heat organization.  You really have to appreciate having a franchise who is so dedicated to its hometown, year in and year out.  The Heat are as first class as they come.