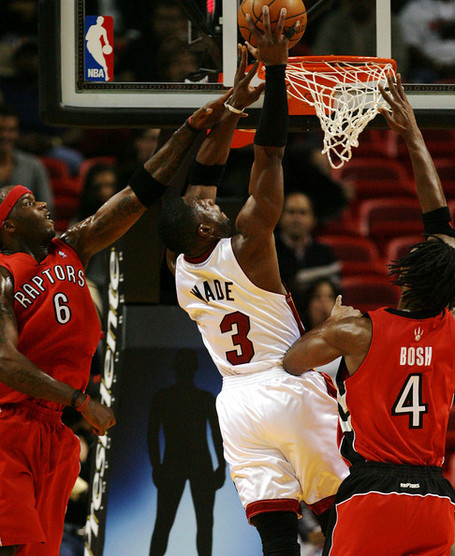 Could all three of these guys be playing in the same color jersey next season?

The headline seems appealing, and you would think that with such a solid, eye-catching statement there would be some good stuff coming along with it.  My personal opinion is 'nah, this is just making something big out of nothing'.  The story all over the web is that a 'friend' of Chris Bosh says that the idea of Bosh playing in Miami "appeals to him".  Whoopdie-doo.

I'm sure the idea of playing in Miami, living in South Florida and being a teammate of Dwyane Wade, Mike Beasley and the rest of the crew seems appealing to a lot of players.  So yeah...take from this 'story' what you will, but for me I couldn't care less what these guys 'friends' have to say.  Show me where the player (or his agent) says something, and you'll have my full attention.

One interesting tidbit I pulled from the article was this:

With Bosh announcing he will test free agency in 2010, a competing executive who spoke to Raptors president Bryan Colangelo said Toronto appears open to considering offers for Bosh and likely would consider a package that includes Michael Beasley -- if the Heat overcomes reluctance to trade Beasley.

The first part of that is the interesting part...that Colangelo is in fact looking to un-load Bosh while he still has value to the Raptors.  No surprise, but it's nice to see it out in the open.  The part about the Heat trading Beasley seems silly to me, but I'm not Pat Riley.  It all depends on how badly Riley wants Bosh...but considering the ceiling on Beasley and the plethora of free agents coming up next summer, trading Beas for Bosh just doesn't make sense for me.

Back in May, Riley was asked is Beasley was off-limits in the trade market and had this to say: "I would think so, in my mind....but you never know what could come from outside."  That gives us absolutely no closure.  I'd prefer to hang on to Beasley and attack the free-agents with a planned strategy...being that the Heat are looking to go into 2010 with more money to spend then almost every team in the NBA, offer players the opportunity to come play in beautiful Miami and pay no state income tax on their newly signed 8-figure deal.

I also think that if the exact same Heat team that ended the 08-09 season came back for next year, we'll be much better.  Beasley, Cook, Chalmers...all guys who should make grand strides in taking their game to the next level.  Haslem and O'Neal are both looking for bounce-back seasons and will be working hard over the summer to get their games right...and no shock as both are free-agents after the season. So I'm not worried, just curious to see what ends up happening.  Either way, I'm hoping for a short summer.

We'll wrap up with some more video for you...these were from Jimmy Kimmel Live last week, as he and Dwyane Wade had a little fun with some kids looking for an autograph. There are two different videos.  Enjoy...